From Infogalactic: the planetary knowledge core
(Redirected from Bandits)
Jump to: navigation, search
"Bandit" redirects here. For other uses, see Bandit (disambiguation).
File:Briganti 1862 from Bisaccia.jpg
Agostino Sacchitiello (Carmine Crocco's lieutenant) and some members of his band from Bisaccia, photographed in 1862.

Banditry is the life and practice of bandits. The New English Dictionary on Historical Principles (NED) defined "bandit" in 1885 as "one who is proscribed or outlawed; hence, a lawless desperate marauder, a brigand: usually applied to members of the organized gangs which infest the mountainous districts of Italy, Sicily, Spain, Greece, Iran, and Turkey". In modern usage the word may become a synonym for "gangster", hence the term "one-armed bandit" for gambling machines that can leave the gambler with no money.[1]

The term bandit (introduced to English via Italian around 1590) originates with the early Germanic legal practice of outlawing criminals, termed *bannan (English ban). The legal term in the Holy Roman Empire was Acht or Reichsacht, translated as "Imperial ban".[citation needed] 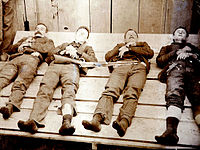 Members of the Dalton Gang following the Battle of Coffeyville in 1892. Left to right: Bill Power; Bob Dalton; Grat Dalton and Dick Broadwell.

About 5,000 bandits were executed by Pope Sixtus V in the five years before his death in 1590, but there were reputedly 27,000 more at liberty throughout central Italy.[2]

Marauding was one of the most common peasant reactions to oppression and hardship. The growth of warlord armies in China was also accompanied by a dramatic increase in bandit activity in the republican period; by 1930 the total bandit population was estimated to be 20 million.[3]

Social bandit or social crime is a term invented by the historian Eric Hobsbawm in his 1959 book Primitive Rebels, a study of popular forms of resistance that also incorporate behaviour characterized by law as illegal. He further expanded the field in the 1969 study Bandits. Social banditry is a widespread phenomenon that has occurred in many societies throughout recorded history, and forms of social banditry still exist, as evidenced by piracy and organized crime syndicates. Later social scientists have also discussed the term's applicability to more modern forms of crime, like street gangs and the economy associated with the trade in illegal drugs.