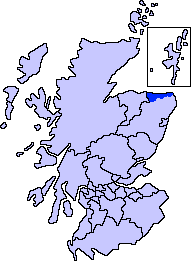 Banff and Buchan is a committee area of the Aberdeenshire Council, Scotland. It has a population of 35,742 (2001 Census). Fishing and agriculture are important industries, together with associated processing and service activity.

The area is relatively self-contained, and in recent years has seen a small decline in population. It does, however, have tourism assets in its coastline, coastal villages and visitor attractions. Economic dependency, peripherality, and the future of the Common Fisheries/Agricultural Policies, are key issues. The Buchan Local Action Plan will address some of these concerns. The Area qualifies for European Union Objective 2 structural funding.

Banff and Buchan was formerly a local government district in the Grampian region, created in 1975, under the Local Government (Scotland) Act 1973.[3] It combined, from the former county of Banff, a Banff area (including the burgh of Banff), the burghs of Aberchirder, Macduff and Portsoy, and Aberchirder and Fordyce areas, and, from the former county of Aberdeen, the burghs of Fraserburgh, Peterhead, Rosehearty and Turriff, and Cruden and Deer Turriff areas. (The rest of the county of Banff became part of the Moray district of the region.)