Bang on a Can

Bang on a Can is a multi-faceted contemporary classical music organization based in New York City. It was founded in 1987 by three American composers who remain its artistic directors: Julia Wolfe, David Lang, and Michael Gordon. Called "the country's most important vehicle for contemporary music" by the San Francisco Chronicle,[1] the organization focuses on the presentation of new concert music, and has presented hundreds of musical events worldwide.[2]

Bang on a Can is perhaps best known for its Marathon Concerts [3] during which an eclectic mix of pieces are performed in succession over the course of many hours while audience members, who are encouraged to maintain a "jeans-and-tee-shirt informality," are welcome to come and go as they please. For the twentieth anniversary of their Marathon Concerts, Bang on a Can presented twenty-six hours of uninterrupted music at the World Financial Center Winter Garden Atrium in New York City.

Bang on a Can Summer Festival at MASS MoCA

In 2002, Bang on a Can began the yearly Summer Institute of Music,[4] a program at the Massachusetts Museum of Contemporary Art (MASS MoCA) for young composers and performers. This program is sometimes referred to by the nickname "Banglewood" in reference to the nearby, but far more traditional Tanglewood Music Festival.

Bang on a Can has commissioned and premiered pieces by composers including Steve Reich, Terry Riley, Michael Nyman, John Adams, Somei Satoh, Iva Bittová, Roberto Carnevale, Ornette Coleman, Donnacha Dennehy and Bun-Ching Lam. In 1998 the organization began the People's Commissioning Fund,[8] which supports the creation of new musical compositions by pooling contributions from numerous member-commissioners whose donations range from $5 to $5,000.

Bang on a Can All-Stars

Main article: Bang on a Can All Stars

The Bang on a Can All-Stars is an amplified sextet formed by its parent organization in 1992. The All-Stars tour internationally and have received awards and public recognition for their work in the contemporary classical music field.[1][12]

The instrumentation of the Bang on a Can All-Stars is clarinet, cello, electric guitar, piano/keyboard, percussion, double bass.

Asphalt Orchestra is Bang on a Can's iconoclastic 12-piece marching band. The ensemble's premiere performance was in 2009 at the Lincoln Center Out of Doors festival, and featured new commissioned works by Tyondai Braxton (of experimental rock group Battles), Goran Bregovic, and Stew and Heidi Rodewald, alongside arrangements of songs by Björk, Meshuggah, Mingus, Nancarrow, and Zappa.[13]

The New York Times has called Asphalt Orchestra's members "12 top-notch brass and percussion players", and praised their performance as "coolly brilliant and infectious."[14]

An independent project founded in 2009 and produced by Bang on a Can, Found Sound Nation (FSN) engages at-risk youth and underrepresented communities producing original audio and video projects across the globe in economically disparate settings. The work of FSN emphasizes a mobile, accessible, collaborative way of recording and producing professional quality music, a technique developed by combining the art music traditions of Bang on a Can with traditions of musique concrète, hip hop, and contemporary composition.[15][16]

In 2012, the project received an award from the U.S. Department of State to produce OneBeat,[17] an international music exchange which will bring together innovative musicians from around the world to compose, produce and perform original music.[18]

Found Sound Nation was co-founded by Christopher Marianetti and Jeremy Thal. The project is directed by Marianetti, Thal and Elena Moon Park.[19]

In the past, Bang on a Can released recordings on Composers Recordings Inc. (CRI), Sony Classical, Point Music (Universal), and Nonesuch, but now the majority of its recordings are found on its own record label, Cantaloupe Music. In addition to releasing works by Gordon, Wolfe, and Lang, the label releases CDs of music by composers and musical groups affiliated with the organization, including Evan Ziporyn, Phil Kline, Alarm Will Sound, Icebreaker, Ethel, Gutbucket, R. Luke DuBois, and Don Byron.

Below is a partial discography of released works performed by Bang on a Can:[20]

Bang on a Can discography 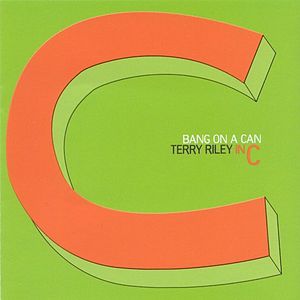 In C by Terry Riley