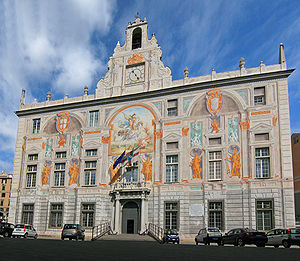 The Palace of Saint George in Genoa.

The Bank of Saint George (Italian: Casa delle compere e dei banchi di San Giorgio or informally as Ufficio di San Giorgio or Banco)[1] was a financial institution of the Republic of Genoa. Founded in 1407,[2] it was the oldest chartered bank in Europe and of the world. The bank's headquarters were at the Palazzo San Giorgio, which was built in the 13th century by order of Guglielmo Boccanegra, uncle of Simone Boccanegra, the first Doge of Genoa.

A number of prominent Genoese families were involved in the establishment and governance of the Bank, including the Houses of Grimaldi & Serra. Unusually for its time, the Bank made use of a number of Jewish agents, including the Ghisolfi clan that managed certain possessions around the Black Sea.

The Bank was governed by four consuls who administered its finances and directed investments.[3] Because the Republic's ruling oligarchs were normally prominent in Bank politics, it is often difficult to determine where the Bank's influence ended and the Republic's began.[4] 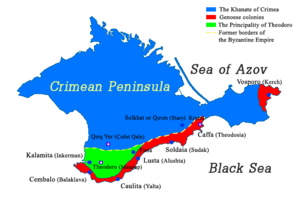 Crimea in the middle of the 15th century; Genoese colonies shown in red.

Many of Genoa's overseas territories were governed either directly or indirectly by the Bank. In 1453 the Republic handed over governance of Corsica, Gazaria, and a number of other possessions to Bank officials, though over the course of the fifteenth century the Republic gradually reclaimed many of its territories from Bank control.[5] The Taman peninsula remained in the control of the de Ghisolfi family, but the princes of that clan now reported to the Bank.

The Bank lent considerable sums of money to many rulers throughout Europe during the fifteenth and sixteenth centuries, gaining widespread influence. Ferdinand and Isabella maintained accounts there, as did Christopher Columbus. Before leaving for his fourth voyage, Columbus wrote a letter to the Governors of the Bank of St. George, Genoa, dated at Seville, 2 April 1502.[6] He wrote "Although my body is here my heart is always near you."[7] Charles V was heavily in debt to the Bank during much of his reign. Niccolò Machiavelli writes in book VIII, chapter XXIX of the Istorie Fiorentine:

This establishment presents an instance of what in all the republics, either described or imagined by philosophers, has never been thought of; exhibiting within the same community, and among the same citizens, liberty and tyranny, integrity and corruption, justice and injustice; for this establishment preserves in the city many ancient and venerable customs; and should it happen (as in time it easily may) that the San Giorgio should have possession of the whole city, the republic will become more distinguished than that of Venice.[1]

After Napoleon invaded Italy, he suppressed independent banks, and this led to the Bank's closure in 1805.[8]