From Infogalactic: the planetary knowledge core
Jump to: navigation, search
Not to be confused with The Royal Bank of Scotland.

The Bank of Scotland plc, (Scottish Gaelic: Banca na h-Alba),[2] is a commercial and clearing bank based in Edinburgh, Scotland. With a history dating to the 17th century, it is the second oldest surviving bank in the United Kingdom (the Bank of England having been established one year before), and is the only commercial institution created by the Parliament of Scotland to remain in existence. It was one of the first banks in Europe to print its own banknotes and it continues to print its own sterling banknotes under legal arrangements which allow Scottish banks to issue currency.

In June 2006, the HBOS Group Reorganisation Act 2006 was passed by the Parliament of the United Kingdom, allowing the bank's structure to be simplified. As a result, The Governor and Company of the Bank of Scotland became Bank of Scotland plc on 17 September 2007.

Bank of Scotland has been a subsidiary of Lloyds Banking Group since 19 January 2009, when HBOS was acquired by Lloyds TSB. 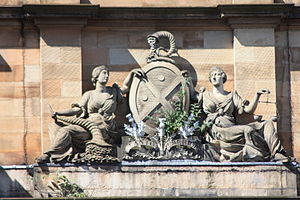 The Governor and Company of the Bank of Scotland was established by an Act of the Parliament of Scotland on 17 July 1695,[3] the Act for erecting a Bank in Scotland, opening for business in February 1696. Although established soon after the Bank of England (1694), the Bank of Scotland was a very different institution. Where the Bank of England was established specifically to finance defence spending by the English government, the Bank of Scotland was established by the Scottish government to support Scottish business, and was prohibited from lending to the government without parliamentary approval.[3] The founding Act granted the bank a monopoly on public banking in Scotland for 21 years, permitted the bank's directors to raise a nominal capital of £1,200,000 pound Scots (£100,000 pound sterling), gave the proprietors (shareholders) limited liability, and in the final clause (repealed only in 1920) made all foreign-born proprietors naturalised Scotsmen "to all Intents and Purposes whatsoever".[3] John Holland, an Englishman, was one of the bank's founders.[3] Its first chief accountant was George Watson.[4] 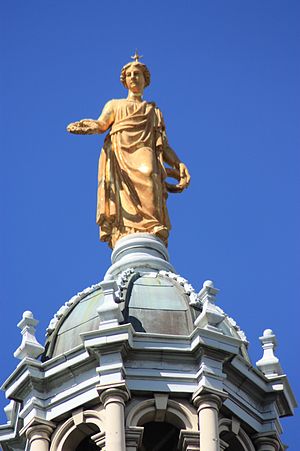 Golden statue of Fame on top of the main dome, Bank of Scotland Head Office, Edinburgh by John Rhind

The Bank of Scotland was suspected of Jacobite sympathies.[3] Its first rival, The Royal Bank of Scotland was formed by royal charter in 1727.[3] This led to a period of great competition between the two banks as they set to drive each other out of business.[3] Although the "Bank Wars" ended in around 1751,[3] competition soon arose from other sources, as other Scottish banks were founded throughout the country.[3] In response, the Bank of Scotland itself began to open branches throughout Scotland. The first branch in London opened in 1865.[5]

The bank also took the lead in establishing the security and stability of the entire Scottish banking system, which became more important after the collapse of the Ayr Bank in 1772,[6] in the crisis following the collapse of the London house of Neal, James, Fordyce and Down. The Western Bank collapsed in 1857, and the Bank of Scotland stepped in with the other Scottish banks to ensure that all Western Bank's notes were paid.[7] See Credit crisis of 1772.

In 1959 Bank of Scotland became the first bank in the UK to install a computer to process accounts centrally.[9] At 11 am on 25 January 1985 the Bank introduced HOBS (Home and Office Banking Services), an early application of remote access technology being made available to banking customers. This followed a small-scale service operated jointly with the Nottingham Building Society for two years but developed by Bank of Scotland. The new HOBS service enabled customers to access their accounts directly on a television screen, using the Prestel telephone network.

The arrival of North Sea Oil to Scotland in the 1970s allowed the Bank of Scotland to expand into the energy sector. The Bank later used this expertise in energy finance to expand internationally. The first international office opened in Houston, Texas, followed by more in the United States, Moscow and Singapore. In 1987, the Bank acquired Countrywide Bank[9] of New Zealand (later sold to Lloyds TSB in 1998). The Bank later expanded into the Australian market by acquiring the Perth-based Bank of Western Australia.[9]

A controversial period in the Bank's history was the attempt in 1999 to enter the United States retail banking market via a joint venture with evangelist Pat Robertson. The move was met with criticism from civil rights groups in the UK due to Robertson's controversial views on homosexuality. The Bank was forced to cancel the deal when Robertson described Scotland as a "dark land overrun by homosexuals".[10] 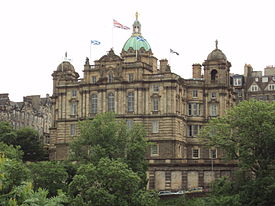 Headquarters at North Bank Street, Edinburgh (the street being named in honour of the bank moving there in 1806).

In the late 1990s, the UK financial sector market underwent a period of consolidation on a large scale. Many of the large building societies were demutualising and becoming banks in their own right or merging with existing banks. For instance Lloyds Bank and TSB Bank merged in 1995 to create Lloyds TSB.[11] In 1999, the Bank of Scotland made a takeover bid for the NatWest Bank.[12] Since the Bank of Scotland was significantly smaller than the English-based NatWest, the move was seen as an audacious and risky move. However, The Royal Bank of Scotland tabled a rival offer, and a bitter takeover battle ensued, with the Royal Bank the victor.[13]

The Bank of Scotland was now the centre of other merger opportunities. A proposal to merge with the Abbey National was explored, but later rejected.[14] In 2001, the Bank of Scotland and the Halifax agreed a merger to form HBOS ("Halifax Bank of Scotland").[15] The headquarters was to stay in Edinburgh, and both banks' brands would continue to be used.

In 2006, HBOS secured the passing of the HBOS Group Reorganisation Act 2006, a private Act of Parliament that would allow the group to operate in a more simplified structure. The Act allowed HBOS to make the Governor and Company of the Bank of Scotland a public limited company, Bank of Scotland plc, which became the principal banking subsidiary of HBOS. Halifax plc transferred its undertakings to Bank of Scotland plc, and although the brand name was retained, Halifax then began to operate under the latter company's UK banking licence.

Although the Bank of Scotland today is not a central bank, it retains the right (along with two other Scottish commercial banks) to issue pound sterling banknotes to this day. These notes are equal in value to notes issued by the Bank of England, the central bank of the United Kingdom.

Along with the Bank of England, the Bank of Scotland was one of the first European banks to issue paper currency redeemable for cash on demand (which was an extremely useful facility given the poor state of the Scottish coinage at the end of the 17th century) on a sustainable basis after the earlier failed attempt of the Swedish Stockholms Banco in 1661-64. Following the Acts of Union in 1707, the bank supervised the reminting of the old Scottish coinage into Sterling.

The right to issue banknotes was extended to other banks after 1716 when the Bank of Scotland's monopoly was allowed to lapse.[citation needed] Up until the middle of the 19th century, privately owned banks in Great Britain and Ireland were permitted to issue their own banknotes, and money issued by provincial Scottish,[18] English, Welsh and Irish banking companies circulated freely as a means of payment.[19] While the Bank of England eventually gained a monopoly for issuing banknotes in England and Wales, attempts to restrict Scottish banks from issuing notes were met with popular opposition.

In 1826, there was outrage in Scotland at the attempt of the United Kingdom Parliament to prevent the production of banknotes of less than five pounds face value. Sir Walter Scott wrote a series of letters to the Edinburgh Weekly Journal under the pseudonym "Malachi Malagrowther" which provoked such a response that the government was forced to relent and allow the Scottish banks to continue printing £1 notes. For this reason Sir Walter still appears on all Bank of Scotland notes.[citation needed]

Bank of Scotland's previous note issue was in 1995, known as the Tercentenary Series as they were issued in the year of the three hundredth anniversary of the foundation of the bank. Each denomination features Sir Walter Scott on the front, and on the back are representations of industries that Scotland excels in:

These notes continue in circulation and are gradually being replaced by the 2007 series.

Bank of Scotland began issuing a new series of banknotes in the Autumn of 2007, which feature the common theme of Scottish bridges.[20] It will take at least three years for the current issue of Bank of Scotland notes to be phased out of circulation. In keeping with the bank's tradition, the front of the notes depict an image of Sir Walter Scott; the image on the 2007 series is based on the portrait of Scott painted by Henry Raeburn.[21] 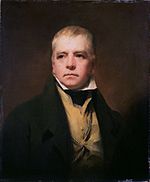 While the colours and sizes of all of the new notes are the same as previous designs, text on the notes is larger than before. The raised, large denomination also acts as an aid for the partially sighted. 'Cornerstones' have been added to the new notes. These are watermark patterns on all corners of the notes, which will improve their durability.

Some new security features have also been added to the new design. These include a metallic security thread embedded in every banknote, which contains the numerical value of the note and the note's bridge image. A new hologram and foil patch has been introduced on the front of the £20, £50 and £100 notes, which features the Bank of Scotland logo and the numerical value of the note.

The Bank has several brands including:

Bank of Scotland sponsored the Scottish Premier League from its inception in 1998 to season 2006/2007 when it declined to renew the deal in favour of investing in grassroots sport instead. Bank of Scotland also sponsors scottishathletics.