From Infogalactic: the planetary knowledge core
Jump to: navigation, search
File:Gazela3.jpg
A banks dory used for cod fishing from the Gazela

The Banks dory, also known as the Grand Banks dory, is the most common variation of the family of boats known as dories. They were used as traditional fishing boats from the 1850s on the Grand Banks of Newfoundland.[1] The Banks dory is a small, open, narrow, flat-bottomed and slab-sided boat with a particularly narrow transom. They were inexpensive to build and could be stacked or nested inside each other and stored on the decks of larger fishing vessels which functioned as mother ships.

Banks dories have long overhangs at the bow and stern which helps them lift over waves. There were one-man and two-man versions. The larger ones (12 ft along the bottom or more) could be fitted with sails and a tiller. The dories became more stable in rough weather when they were loaded with about half a ton of catch.

The Banks dory type is very simple and efficient to produce making them well suited to mass production. By 1880, Bank dories were being built in large numbers in the Massachusetts towns of Gloucester, Beverly, Essex, Newburyport, and Salisbury (Amesbury). Other major areas of production included Seabrook, New Hampshire; Lunenburg, Nova Scotia; Shelburne, Nova Scotia and both Portland and Bremen, Maine. Salisbury alone had 7 shops producing between 200 and 650 boats a year. The firm of Higgins and Giford of Gloucester advertised in 1886 that it had built over 3,000 dories in the preceding 13 years.[2] Founded in 1793, Lowell's Boat Shop of Amesbury Massachusetts is the oldest continuously operating boat shop in United States. It the first to build these boats in large numbers and excelled at their mass production. In the year 1911 Lowell's Boat Shop produced 2029 dories, averaging 7 dories a working day. A National Landmark and working museum, Lowell's Boat Shop continues to build its dories and skiffs in the Lowell tradition to this day.

File:Shelburnecountymuseum.jpg
The Dory Shop Museum, seen on the right, in Shelburne, Nova Scotia.

In Nova Scotia, the towns of Lunenburg and Shelburne maintained a rivalry in mass production of dories. A distinction emerged in 1887 with the use in Shelburne of "dory clips", metal braces used to join frames, versus the more expensive but stronger natural wood frames used in Lunenburg dories. The John Williams Dory Shop in Shelburne was one of several Shelburne factories mass-producing dories. It is now the Dory Shop Museum, operated by the Nova Scotia Museum and continues to produce banks dories for local and visiting customers.[3] 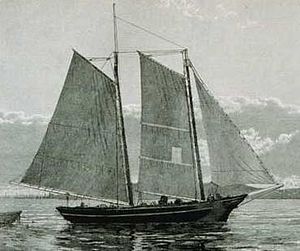 The barquentine, Gazela Primeiro, while not a schooner, was one of the last of the dory mother ships. She had a long association with dories and the Grand Banks cod industry and made her final voyage in 1969.

Banks dories have been capable of surviving long voyages, some unintentional, when the fishermen became separated from their mother ships. One of the more famous adventures was by Howard Blackburn, who survived 5 days in the North Atlantic in January.

A Banks dory is seen in Winslow Homer's painting The Fog Warning.

The rugged construction, affordability and ease of stowage made banks dories popular for work boats on large sailing vessels as well as steamships and motor vessels. These same virtues made them popular for inshore fishermen in some locales. They were also used in later years as lifeboats and tenders on commercial motor fishing boats such as Cape Islander fishing boats.[4] In recent times, the history and iconic look of banks dories have made them popular for amateur boat builders and some recreational boaters