Bannow (Irish: Banú) (Yola: Baannough) is a civil parish lying east of Bannow Bay on the south-west coast of County Wexford, Ireland. In modern times the main settlement is the village of Carrig-on-Bannow (or Carrig). In Norman times there was a borough called Bannow on Bannow Island at the mouth of the Bay. This town has since disappeared, probably due to the silting up of the natural harbour channels in the 14th century, and the former island is now attached to the rest of the parish.

File:BannowPlaque.JPG
Plaque near former Bannow Island, recalling the location where the Normans first landed in Ireland, in 1169.

It is believed that the Vikings had a strong early presence in the area, due to the survival of numerous Norse place-names in the locality. The Norman conquest of Ireland began in Bannow Bay in 1169, when three ships commanded by Robert Fitz-Stephen arrived at the behest of Diarmait MacMurrough to support his claim to the Kingdom of Leinster. Another group of Normans under Raymond le Gros landed the following year on the far side of Bannow Bay, on the Hook Peninsula at Baginbun, which was then called Irish: Dún Domhnaill. There was a small promontory fort there, easy for the Normans to defend and thereby ensure a safe landing.[citation needed]

At Bannow Island, the ruins can still be seen of the 13th-century Norman Romanesque parish church of St Mary, originally impropriated to the monks of Canterbury.[1] It consists of a nave and chancel. Another famous Norman soldier and officer who landed in the first invasion was Meiler Fitzhenry, whose son adopted his father's name, and thus began the Meyler family of County Wexford, who later were prominent in the Wexford Rebellion of 1798.

Bannow Borough was a borough constituency returning two members to the Parliament of Ireland until the Act of Union 1800 disenfranchised it. It was a pocket borough with the same proprietor and electors as Clonmines Borough, another rotten borough for the deserted town of Clonmines at the northern limit of Bannow Bay. The most prominent local landlords in Bannow from the late 17th century were the Boyse family, who lived at Bannow House. The last member of the Boyse family left the area in 1948.[citation needed]

During the Irish Rebellion of 1798, the fleeing loyalist garrison of the town of Wexford crossed the nearby Scar at Barrystown on their way to Duncannon Fort. In the late 19th century, the area was heavily involved in the Land Wars.[citation needed] 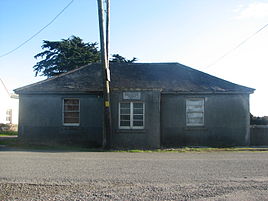 Bannow is a Roman Catholic parish in the Diocese of Ferns.[2] The parish church in Carrig-on-Bannow was first built in 1856 and has been altered several times since. It has an adjoining cemetery. Carrig also has a national school, Garda Station,[3] handball alley, post office, and three public houses. A kilometre away is an Anglican church at Balloughton, and at nearby Grantstown is an Augustinian priory. There are beaches on Bannow Island, at Cockle Strand, and Cullenstown.

The local GAA Club is Bannow-Ballymitty GAA Club,[6] whose pitch is located at Grantstown.

There is also a somewhat recently arisen, but now very strong tradition, in the playing and mastery of traditional Irish music in the parish. From small beginnings, and teaching/playing classes which were founded through the aegis of the after school program and voluntarily staffed and supervised locally by Martha Torpey, John Marshall, Kathleen Hayes, Fr. Harry Sinnott and Andy Monahan in the late 1970s, over the years a sense of great community tradition and excellence has grown in tandem with this ever strengthening cultural activity. They formed the Danescastle Music Group (Bannow C.C.E.) which has (as of 2010) over 150 pupils. It is a Co. Wexford branch of Comhaltas. Other members of Comhaltas Ceolteori Eireann in the parish include the Gleeson family, the Murphy Bros, Sean Stafford, Nick Bennett and many more traditional musicians and singers. Colfers pub is a popular venue for traditional sessions. Also the Phil Murphy Weekend is held every year in Carrig on Bannow. Bannow is well known for weekend music sessions, particularly Barretts 'Brandane Inn', and Colfer's pub, Carrig-on -Bannow.[7]