The Banque de France, headquartered in Paris, is the central bank of France; it is linked to the European Central Bank (ECB). Founded in 1800, it helped resolve the financial crisis of 1848 and emerged as a powerful central bank. Its main charge is to implement the interest rate policy of the European System of Central Banks (ESCB).

In 1800, financial power in France was in the hands of about ten to fifteen banking houses whose founders, in most cases, came from Switzerland in the second half of the eighteenth century. These bankers, mostly Protestant, were deeply involved in the agitations leading up to the French Revolution. When the revolutionary violence got out of hand, they orchestrated the rise of Napoleon, whom they regarded as the restorer of order. As a reward for their support, Napoleon, in 1800, gave the bankers a monopoly over French finance by giving them control of the new Bank of France.[1] For the first fifteen years it was the sole issuer of bank notes in Paris, and this privilege was extended to other financially important towns and the rest of the country by 1848.[2]

Linkage with the ESCB 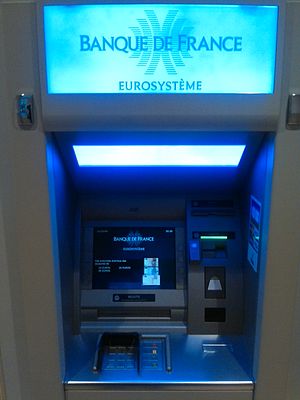 ATM of the Banque de France in Paris.

On 1 June 1998, a new institution was created, the European Central Bank (ECB), charged with steering the single monetary policy for the euro. The body formed by the ECB, and the national central banks (NCB) of all the member states of the European Union, constitute the European System of Central Banks (ESCB). 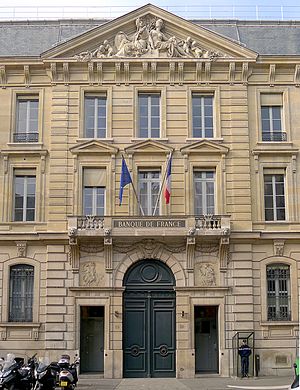 In 2010, the French government's Autorité de la concurrence (the department in charge of regulating competition) fined eleven banks, including Banque de France, the sum of €384,900,000 for colluding to charge unjustified fees on check processing, especially for extra fees charged during the transition from paper check transfer to "Exchanges Check-Image" electronic transfer.[5][6]