From Infogalactic: the planetary knowledge core
Jump to: navigation, search
For other uses, see Banquet (disambiguation). 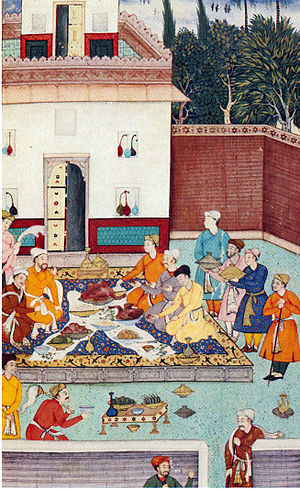 A banquet for Babur

A banquet (/ˈbæŋk.wɪt/; French: [bɑ̃.kɛ]) is a large meal or feast,[1] complete with main courses and desserts. It usually serves a purpose such as a charitable gathering, a ceremony, or a celebration, and is often preceded or followed by speeches in honor of someone.

Overall, there is an archaeological debate of when feasting began. Archaeologist Brian Hayden argues that feasts were an important event because the surplus of food that resulted into feasts turned into social and political ties and a competition in order to display one's own wealth. During these feasts, luxury foods were offered to their guest. What these luxury goods were are still up to debate. However, Hayden argues that animal meat and rice are some of these luxury goods because they were domesticated despite their difficulty in doing so.[2] The term banquet, however, termed from a different time period.

The idea of banqueting is ancient (see Sellisternium, Belshazzar's Feast, and Mead halls). In the 16th century, a banquet was very different from our modern perception and stems from the medieval 'ceremony of the void'. After dinner, the guests would stand and drink sweet wine and spices while the table was cleared, or ‘voided’. (Later in the 17th century ‘void’ would be replaced with the French ‘dessert’.) During the 16th century, guests would no longer stand in the great chamber whilst the table was cleared and the room prepared for entertainment, but would retire to the parlour or banqueting room.

As the idea of banqueting developed, it could take place at any time during the day and have much more in common with the later practice of taking tea. Banqueting rooms varied greatly from house to house, but were generally on an intimate scale, either in a garden room or inside such as the small banqueting turrets in Longleat House. 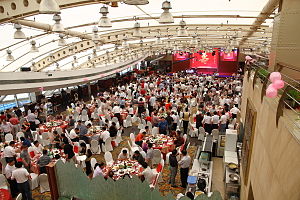 Chinese banquet for a birthday celebration
File:Menu card with crests of T.-C. Bisse-Challoner, mid 19th century, as used in Mayfair or Surrey, UK.jpg
An English menu card for the household of Col. Bisse-Challoner, c. 1838-1860.

Today, banquets serve many purposes from training sessions, to formal business dinners. Business banquets are a popular way to strengthen bonds between businessmen and their partners. It is common that a banquet is organized at the end of an academic conference. A luau is one variety of banquet originally used in Hawaii. The Nei Mongol provincial government in China levies a tax on banquets.