Bar-le-Duc, formerly known as Bar, is a commune in the Meuse département, of which it is the capital. The department is in Lorraine in northeastern France.

The lower, more modern and busier part of the town extends along a narrow valley, shut in by wooded or vine-clad hills, and is traversed throughout its length by the Ornain, which is crossed by several bridges. It is limited towards the north-east by the Marne-Rhine Canal, on the south-west by a small arm of the Ornain, called the Canal des Usines, on the left bank of which the upper town (Ville Haute) is situated.

Bar-le-Duc was at one time the seat of the countship, later Duchy of Bar. Though probably of ancient origin, the town was unimportant until the 10th century when it became the residence of the counts. Originally part of the early medieval duchy of Upper Lorraine, at some stage in the early modern period it was acquired by the neighbouring dukes of Lorraine. 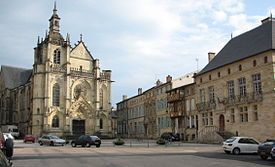 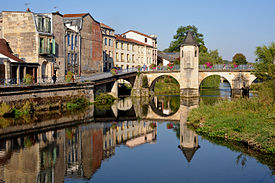 Notre-Dame Bridge over the Ornain

The Ville Haute, which is reached by staircases and steep narrow thoroughfares, is intersected by a long, quiet street, bordered by houses of the 15th, 16th and 17th centuries. In this quarter are the remains (16th-century) of the chateau of the dukes of Bar, dismantled in 1670, the old clock-tower, and the college, built in the latter half of the 16th century. Its church of Saint-Étienne (constructed during the 14th and 15th centuries) contains a skillfully carved effigy in white stone of a half-decayed corpse, erected to the memory of René of Châlon (died 1544), the work of 16th-century artist Ligier Richier, a pupil of Michelangelo.

The lower town contains the official buildings and the churches of Notre-Dame, the most ancient in the town, and St. Antony, with 14th-century frescoes. Among the statues of distinguished natives of the town is one to Nicolas Oudinot, whose house serves as the hotel-de-ville. Other sights include the Notre-Dame Bridge, with five arches surmounted by a chapel in the middle.

The highly rarefied Bar-le-duc jelly, also known as Lorraine Jelly, is a spreadable preparation of white currant or red currant fruit preserves, hailing from this town. First referenced in the historical record in 1344, it is also colloquially referred to as Bar Caviar. 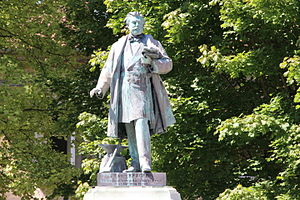 Bar-le-Duc was the birthplace of:

Other notable residents were:

Bar-le-Duc is twinned with: