The use of the term bar to mean "the whole body of lawyers, the legal profession" comes ultimately from English custom. In the early 16th century, a railing divided the hall in the Inns of Court, with students occupying the body of the hall and readers or benchers on the other side. Students who officially became lawyers crossed the symbolic physical barrier and were "admitted to the bar".[1] Later, this was popularly assumed to mean the wooden railing marking off the area around the judge's seat in a courtroom, where prisoners stood for arraignment and where a barrister stood to plead. In modern courtrooms, a railing may still be in place to enclose the space which is occupied by legal counsel as well as the criminal defendants and civil litigants who have business pending before the court.

In many Commonwealth jurisdictions, including in England and Wales, the "bar association" comprises lawyers who are qualified as barristers or advocates (collectively known as "the bar", or "members of the bar"), while the "law society" comprises solicitors. These bodies are sometimes mutually exclusive, while in other jurisdictions, the "bar" may refer to the entire community of persons engaged in the practice of law.

Membership in the bar is a privilege burdened with conditions. 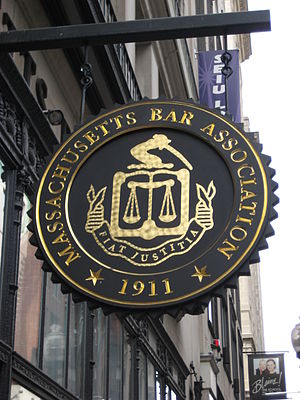 Although bar associations historically existed as unincorporated voluntary associations, nearly all bar associations have since been organized (or reorganized) as corporations. Furthermore, membership in some of them (see the next section below) is no longer voluntary, which is why some of them have omitted the word "association" and merely call themselves the "state bar" to indicate that they are the incorporated body that constitutes the entire admitted legal profession of a state.

Some states require membership in the state's bar association to practice law there. Such an organization is called a mandatory, integrated, or unified bar,[3][4] and is a type of government-granted monopoly. They exist at present in a slight majority of U.S. states: Alabama, Alaska, Arizona, California, Florida, Georgia, Hawaii, Idaho, Kentucky, Louisiana, Maine, Michigan, Mississippi, Missouri, Montana, Nebraska, Nevada, New Hampshire, New Mexico, North Dakota, Oklahoma, Oregon, Rhode Island, South Carolina, South Dakota, Texas, Utah, Virginia, Washington State, West Virginia, Wisconsin, and Wyoming. The District of Columbia, the U.S. Virgin Islands, Guam and the Northern Mariana Islands also have unified bars. The mandatory status of the Puerto Rico Bar Association was eliminated in 2009 by an act of the legislature, ratified by recently appointed majority of the Puerto Rico Supreme Court. By act of the Puerto Rico legislature, the mandatory status was reinstated in June, 2014. The Supreme Court of Puerto Rico struck down this act in October, 2014, finding that the it unconstitutionally usurped powers of the Supreme Court.

In some states, like Wisconsin, the mandatory membership requirement is implemented through an order of the state supreme court, which can be revoked or canceled at any time at the court's discretion. In others, like Oregon, the state legislature passed a law and created a government agency. California went farther than any other state and wrote the State Bar of California into its constitution.

The first state to have an integrated bar association was North Dakota in 1921.[5]

A voluntary bar association is a private organization of lawyers. However, the membership may not be restricted only to registered lawyers. The membership can extend to people interested in goals and purpose of the Association. Each Association chooses its own purposes (e.g., social, educational, and lobbying functions), but does not regulate the practice of law or admit lawyers to practice.

There is no mandatory federal bar association. The Federal Bar Association is a private, voluntary group.

Most American law schools have a student bar association, which is a student organization that fulfills various functions, including sometimes serving as the student government.

Judges may or may not be members of the bar. Etymologically, they sit "on the bench", and the cases which come before them are "at bar" or "at bench". Many states in the United States require that some or all judges be members of the bar; typically these limit or completely prohibit the judges from practicing law while serving as a judge.

The U.S. Constitution contains no requirement that Federal judges or U.S. Supreme Court justices be members of the bar. However, there are no modern instances of the President nominating or the Congress approving any candidate who is not a member of any bar. There are various professional associations of judges, such as the American Judges Association, that perform some of the educational and other service functions of bar associations.