From Infogalactic: the planetary knowledge core
Jump to: navigation, search
Not to be confused with Barbara J. Bain.

Bain was born Mildred Fogel [1][2][3] in Chicago, the daughter of Russian Jewish immigrants.[4] She graduated from the University of Illinois with a bachelor's degree in sociology. Developing an interest in dance, she moved to New York City, where she studied alongside Martha Graham. Dissatisfied with her career as a dancer, she went into modeling; jobs with Vogue, Harper's and other publications followed.

Still uninspired, however, Bain entered the Theater Studio to study acting; first under Curt Conway, then Lonny Chapman. Progressing to the Actors Studio, she was instructed by Lee Strasberg.[5][6]

Bain's first acting role was in Paddy Chayevsky's play Middle of the Night, which embarked on a national tour in October 1957.[5][7] Accompanying Bain was fellow actor and newly acquired husband Martin Landau; the final leg of the tour brought the couple to Los Angeles, where they settled permanently.[5] After moving, Bain established herself at the Actors Studio West, where she continues to teach classes and perform scene work.[8] 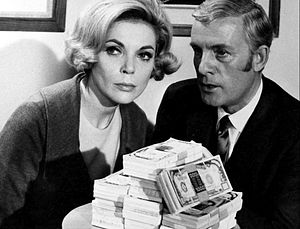 Bain's earliest television appearances included CBS's Tightrope, with Mike Connors, and three ABC series: The Law and Mr. Jones with James Whitmore, Adventures in Paradise with Gardner McKay, and Straightaway with Brian Kelly and John Ashley. After a recurring role as David Janssen's romantic interest in Richard Diamond, Private Detective in 1959, she guest-starred as Madelyn Terry in a 1960 episode of Perry Mason, "The Case of the Wary Wildcatter", and in 1964 played the role of Elayna Scott in "The Case of the Nautical Knot".

Between 1966 and 1969, Bain appeared—alongside her then husband, Martin Landau—in the major role of Cinnamon Carter in Mission: Impossible; she also starred as the character in a 1997 episode of Diagnosis: Murder. She won three consecutive Emmy Awards for Best Dramatic Actress for her performance in 1967, 1968 and 1969, in addition to a Golden Globe Award nomination in 1968.[9]

She starred opposite Landau again in the science-fiction TV series Space: 1999 (1975–77), as Dr. Helena Russell, and the made-for-TV film The Harlem Globetrotters on Gilligan's Island (1981). Bain also appeared in The Dick Van Dyke Show, in the episode "Will You Two Be My Wife?", and My So-Called Life, playing the main character Angela Chase's grandmother in one episode. Other appearances include "Matroyoshka", an episode of the 1990s science-fiction series Millennium.

In 1998, Bain was a special guest star in the Walker, Texas Ranger episode "Saving Grace", as the Mother Superior. In 2006, she had a minor role in one episode of CSI: Crime Scene Investigation ("Living Legends"). In 2008, co-starring with her daughter Juliet Landau, Bain voiced the character of Verdona Tennyson in "What Are Little Girls Made Of?", an episode of Ben 10: Alien Force.

On April 28, 2016, Bain was honored with the 2,579th star on the Hollywood Walk of Fame. Bain's star is located at 6767 Hollywood Blvd. Lifelong friends Edward Asner and Dick Van Dyke were on hand to speak and assist in the unveiling of the star.

Bain married actor Martin Landau in 1957; they divorced in 1993. The couple had two daughters, actress Juliet Landau and film producer Susan Bain Landau Finch[10] (born Susan Meredith Landau). Bain is Jewish.[11] She has contributed to many charitable causes, including literacy.

When asked about watching the development of her daughter's acting career, Bain told Attention Deficit Delirium: "I think it's wonderful. She wants it, she's very good at it, so she should do it. She's very gifted. I've seen her in the theater, and we've been on stage together. We did a play in Los Angeles together. It was gorgeous because I was in the wings and could watch her, and she could be in the wings and watch me. I handed her a handkerchief at the end of her big crying scene. I've never been nervous about her because she knows what she's doing, so I'm very calm when I watch her and very excited to see what she's doing. I don't take pride because it doesn't seem like anything that I did. It seems more exquisite pleasure, but not pride. I didn't do anything, she did it. In kindergarten she said she wanted to be a singer or dancer or actress. She does sing and did dance. She didn't mess around. She went right after what she was going to do."[12]