Barbara of Portugal (Maria Madalena Bárbara Xavier Leonor Teresa Antónia Josefa; 4 December 1711 – 27 August 1758) was an Infanta of Portugal and later Queen of Spain as wife of Ferdinand VI of Spain.

Born Maria Madalena Josefa Teresa Bárbara, Barbara was the eldest child of King John V of Portugal and his wife, Archduchess Maria Anna of Austria, a daughter of Emperor Leopold I. The Princess was baptised Maria Madalena Bárbara Xavier Leonor Teresa Antónia Josefa, her names honouring a number of saints and relatives. She was usually referred to as Bárbara or Maria Bárbara, a name never before used among Portuguese royals, in honour of Saint Barbara, the saint of her birthday. She was a first cousin of the future Empress Maria Theresa as well as Maria Josepha of Austria. Although her parents were married in 1708, they remained childless for nearly three years. The King then made a promise to God that if an heir to the throne was born, a great convent would be built as a sign of gratitude. On 4 December 1711 Barbara was born, and, as promised, the King had the Convent of Mafra built.

Barbara was born as heiress-presumptive to the Portuguese throne, styled as Princess of Brazil. Her status as heiress presumptive lapsed when the Queen gave birth to a son, Pedro, two years later. Pedro died at the age of two, though another son, Joseph, born before Pedro's death, prevented Barbara from ever being heiress-presumptive again. 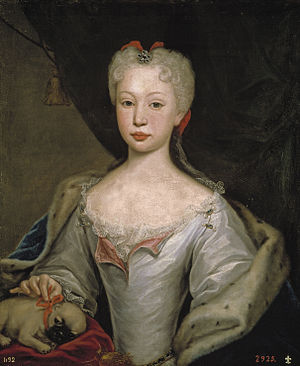 Barbara in her younger years. By Domenico Duprà

Barbara had a fine education and loved music. A prodigiously talented keyboard player, she was the only student of Domenico Scarlatti, the great harpsichordist and composer, from age 9 or 10 until Scarlatti died in 1757, a year before her own death. She was considered to marry Louis XV of France.

In 1729 at the age 18, Barbara married the future Ferdinand VI of Spain, two years her junior. Her brother Joseph married Ferdinand's half-sister, the Spanish Infanta Infanta Mariana Victoria, who was previously a rejected bride of Louis XV. The double marriage was meant to repair the Portuguese-Spanish alliance.[1] Scarlatti followed her to Madrid after her marriage and remained with her, composing hundreds of harpsichord sonatas for her. During her husband's reign, Barbara presided over magnificent parties and concerts at the Royal Palace of Aranjuez, which was her favorite retreat.

During their tenure as prince and princess of Asturias, Ferdinand and Barbara became the center of the opposition called Spanish party in parallel to a deteriorating relation to Portugal, and was from 1733 until 1737 kept under more or less house arrest in their apartments and prevented to show themselves in public and watched by the spies of queen Elizabeth. This gave Barbara the time to deepen her relationship with the timid Ferdinand and his ill health.[2]

Although Barbara was not considered beautiful by her contemporaries — her homely looks were thought by observers to cause her future husband a visible shock when he was first presented to her — 'Ferdinand the Learned' (as he was later known) became deeply attached to her,[1] sharing her passion for music.[citation needed] Ferdinand soon became dependent on Barbara for advice and support; when he ascended the Spanish crown as Ferdinand VI, the French ambassador noted "it is rather Barbara who succeeds Elizabeth [step-mother of Ferdinand] than Ferdinand succeeding Philippe."[1] Barbara was well-educated, adept at languages, an avid reader of many varied subjects and had a love of music.[1]

Upon their succession, Barbara was exposed to attempts to separate her from Ferdinand's confidence from among others the queen dowagers supporters, and made an alliance with three members of the Spanish party, who had been in opposition during the previous regime, Ensenada, Huascar and Carvajal, in securing the "Spanish party" as her supporters and the dismissal of all power holders of the previous regime which threatened her own influence over Ferdinand.[2] Encouraged by Barbara, Ferdinand fired minister Villarias who was replaced by Carvajal, and in July 1747 the dowager queen was exiled from court.[2] 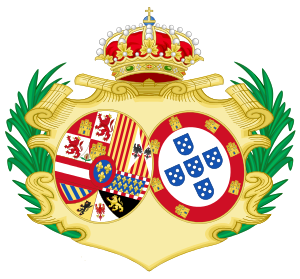 Coat of arms of Queen Barbara

In contrast to her predecessor as queen, Barbara did not like to flaunt her influence over her spouse and the government policy, and she made a moderately positive impression upon the public.[2] She was not as self-assured nor did not have as much political ambition as Elisabeth Farnese, and her policy focused mainly upon a friendly relationship between Spain and Portugal in cooperation with her father and the Portuguese ambassador Belmonte.[2] Queen Barbara participated regularly in the affairs of state: the ministers, who respected her, presented to her all documents of state before they were given to the king, because: "only she knows what ought either be said or hidden from the king":[2] she was the channel through which the ministers worked with the king, as it was she who advised him as how to achieve the desired result from the king, and the ministers relied upon her for their work as, the British ambassador Benjamin Keene reported: "She can sway him as she pleases, with as much power, but much less difficulty, than ever the Dowager did the late King, his father."[2] In 1754, she was behind the fall of her previous ally Ensenada. Keene and Huascar presented the queen with a paper implying that minister Ensenada was making puppets of the royal couple. They succeeded to convince her to act against Ensenada, and in cooperation with Richard Wall and Huascar, Barbara convinced Ferdinand to exile Ensenada.[2]

The couple produced no viable children,[1] with Barbara having a stillborn son in 1733. Barbara suffered from severe asthma for most of her life and became quite overweight later in life.[3] She died at the Royal Palace of Aranjuez, on the outskirts of Madrid on 27 August 1758. Barbara's death was said to have broken her husband's heart.