The Barbary lion (Panthera leo leo), also known as the Atlas lion, was an African lion population native to North Africa, including the Atlas Mountains, that is now considered extinct in the wild.[2] Pease referred to the Barbary lion as the North African lion, and accounted that the population has been diminished since the mid 19th century following the introduction of firearms and bounties for shooting them.[1] The last recorded shooting of a wild Barbary lion took place in Morocco in 1942 near Tizi n'Tichka. Small groups of Barbary lions may have survived in Algeria until the early 1960s and in Morocco until the mid-1960s.[3]

A lion from Constantine, Algeria was considered the type specimen of the specific name Felis leo used by Linnaeus in 1758.[4][5] The Barbary lion was first described by the Austrian zoologist Johann Nepomuk Meyer under the trinomen Felis leo barbaricus on the basis of a type specimen from Barbary.[6] 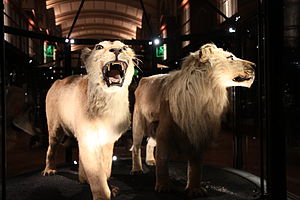 The Barbary lion was long considered one of the biggest lion subspecies.[7] Museum specimens of male Barbary lion were described as having very dark and long-haired manes that extended over the shoulder and to the belly. Head-to-tail length of stuffed males varies from 2.35 to 2.8 m (7 ft 9 in to 9 ft 2 in), and females measure around 2.5 m (8 ft 2 in). A 19th century hunter described a large male allegedly measuring 3.25 m (10.7 ft) including a 75 cm (30 in) long tail.[8][9] In some historic accounts the weight of wild males was indicated as very heavy and reaching 270 to 300 kilograms (600 to 660 lb). But the accuracy of the measurements may be questionable, and the sample size of captive Barbary lions were too small to conclude they were the biggest lion subspecies.[10]

Before it became possible to investigate the genetic diversity of lion populations, the colour and size of lion manes was thought to be a sufficiently distinct morphological characteristic to accord a subspecific status to populations.[11] Results of a long-term study of lions in the Serengeti National Park indicate that various factors such as ambient temperature, nutrition and level of testosterone influence the colour and size of lion manes.[12] Sub-Saharan lions kept in a cool environment of European and North American zoos usually develop bigger manes than their wild counterparts. Barbary lions may have developed long-haired manes because of the temperatures in the Atlas Mountains that are much lower than in other African regions, particularly in winter.[10] Therefore, the size of manes is not regarded as appropriate evidence for identifying Barbary lion ancestry. Results of mitochondrial DNA research published in 2006 support the genetic distinctness of Barbary lions in a unique haplotype found in museum specimens that are believed to be of Barbary lion descent. The presence of this haplotype is considered a reliable molecular marker for the identification of Barbary lions surviving in captivity.[11]

Pease accounted in 1913 that in areas where lions were not very numerous, they were more frequently found in pairs or family parties comprising a lion, lioness and one or two cubs. He several times came across two old lions and a lioness living and hunting together.[1] Observations of wild Barbary lions made between 1839 and 1942 involved solitary animals, pairs and family units. Analysis of these historical records suggests that Barbary lions retained living in prides even when under increasing persecution during the last decades, especially in the eastern Maghreb. The size of prides was likely similar to prides living in sub-Saharan habitats, whereas the density of the Barbary lion population is considered to have been lower than in moister habitats.[3]

When Barbary stags and gazelles became scarce in the Atlas Mountains Barbary lions preyed on herds of livestock that were carefully tended.[13] They also preyed on wild boar and red deer.[14]

Extinction in the wild

Barbary lions inhabited the range countries of the Atlas Mountains including the Barbary Coast.[9] Jardine remarked in 1834 that at the time lions may have already been eliminated from the coast lines, marking the border to human settlements.[15]

In Algeria, they lived in the forest-clad hills and mountains between Ouarsenis in the west, the Pic de Taza in the east, and the plains of the Chelif River in the north. There were also many lions among the forests and wooded hills of the Constantine Province eastwards into Tunisia and south into the Aurès Mountains. By the middle of the 19th century their numbers had been greatly diminished. The cedar forests of Chelia and neighbouring mountains harboured lions until about 1884.[1] The last survivors in Tunisia were extirpated by 1890.[16]

In the 1970s, Barbary lions were assumed to have been extirpated in the wild in the early 20th century.[9] But a comprehensive review of hunting and sighting records indicates that the last Barbary lion was shot in the Moroccan part of the Atlas Mountains in 1942. Barbary lions were sighted in Morocco and Algeria into the 1950s, and small remnant populations may have survived into the early 1960s in remote areas.[3] 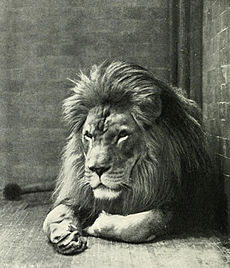 The Romans used Barbary lions in the Colosseum to battle with gladiators.[17]

In the Middle Ages, the lions kept in the menagerie at the Tower of London were Barbary lions, as shown by DNA testing on two well-preserved skulls excavated at the Tower in 1936-1937. The skulls were radiocarbon-dated to 1280-1385 AD and 1420-1480 AD. The growth of civilizations along the Nile and in the Sinai Peninsula by the beginning of the second millennium BC stopped genetic flow by isolating lion populations. Desertification also prevented the Barbary lions from mixing with lions located further south in the continent.[18]

Historically, Barbary lions were offered in lieu of taxes and as gifts to royal families of Morocco and Ethiopia. The rulers of Morocco kept these 'royal lions' through war and insurrection, splitting the collection between zoos when the royal family went briefly into exile. After a respiratory disease nearly wiped out the royal lions in the late 1960s, the current ruler established enclosures in Temara near Rabat, Morocco, to house the lions and improve their quality of life. There are currently a small number of 'royal lions' that have the pedigree and physical characteristics to be considered as mostly pure Barbary descendents. Some were returned to the palace when the exiled ruler returned to the throne.[10]

Emperor Haile Selassie I of Ethiopia had a collection of Barbary lions that were kept in the Addis Ababa Zoo.[20]

Five tested samples of lions from the famous collection of the King of Morocco are not maternally Barbary lions. Nonetheless, genes of the Barbary lion are likely to be present in common European zoo lions, since this was one of the most frequently introduced subspecies. Therefore, many lions in European and American zoos, which are managed without subspecies classification, are in fact partly descendants of Barbary lions.[11]

In 2006, mtDNA research revealed that a lion specimen kept in the German Neuwied Zoo originated from the collection of the King of Morocco and is very likely a descendant of a Barbary lion.[2]

In a comprehensive study about the evolution of lions, 357 samples of 11 lion populations were examined. Results indicate that four "Atlas" lions from Morocco did not exhibit any unique genetic characteristics. The Moroccan cats shared mitochondrial haplotypes (H5 and H6) with central African lions and together with them were part of a major mtDNA grouping (lineage III) that also included Asiatic samples. According to the authors, this scenario was in line with their theories on lion evolution. They conclude that lineage III developed in east Africa and then traveled north and west in the first wave of lion expansions out of the region some 118,000 years ago. It apparently broke up into haplotypes H5 and H6 within Africa and then into H7 and H8 in west Asia.[21]

While the historical Barbary lion was morphologically distinct, its genetic uniqueness remains questionable, and the taxonomic status of surviving lions frequently considered as Barbary lions, including those that originated from the collection of the King of Morocco, is still unclear.[22]

The Living Treasures Wild Animal Park in New Castle, Pennsylvania, claims to keep a pair of Barbary lions in the park's collection.[23] The Zoo des Sables d'Olonne, Vendee, France, also claims to have a male and female Atlas lion.[24] 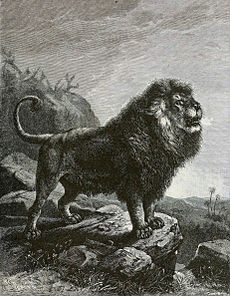 The former popularity of the Barbary Lion as a zoo animal provides the only hope to ever see it again in the wild in North Africa. Many zoos provide mating programmes, which will help to increase the population of the species.[citation needed]

After years of research into the science of the Barbary Lion and stories of surviving examples, WildLink International, in collaboration with Oxford University, launched its ambitious International Barbary Lion Project. Oxford used the very latest DNA techniques to identify the DNA 'fingerprint' of the Barbary Lion subspecies. Researchers took bone samples from remains of Barbary Lions in museums across Europe, like those in Brussels, Paris, Turin and others. These samples were returned to Oxford University, where the science team extracted the DNA sequence to identify the Barbary as a separate subspecies.[citation needed]

Although the Barbary is extinct, and is certainly extinct in the wild, WildLink International looked to identify a handful of lions in captivity around the world that may be descended from the original Barbary Lion. These descendants were to be tested against the DNA fingerprint, and the degree of any hybridization (from crossbreeding) could then be determined. The best candidates were to then enter a selective breeding programme slated to 'breed back' the Barbary Lion. The final phase of the project intended to see the lions released into a national park in the Atlas Mountains of Morocco.[citation needed]

In March 2010, two lion cubs were moved to The Texas Zoo in Victoria, Texas, where efforts were made to preserve the species under the WildLink International conservation programme. Whether the cubs are of Barbary lion descent, is not yet determined.[25] In 2011, the Port Lympne Animal Park in Kent received a female Barbary lion as mate for the resident male.[26]

More recently a number of researchers and zoos have supported the development of a studbook of lions directly descended from the King of Morocco's collection.[22] This work has been conducted on the precautionary principle that this subpopulation of animals may hold unique Barbary lion genes as well as demonstrating the morphology of the ancestral Barbary lion.