The Barberini were a family of the Italian nobility that rose to prominence in 17th century Rome. Their influence peaked with the election of Cardinal Maffeo Barberini to the papal throne in 1623, as Pope Urban VIII. Their urban palace, the Palazzo Barberini, (completed in 1633 by Bernini), today houses Italy's Galleria Nazionale d'Arte Antica (National Gallery of Ancient Art).

The Barberini family were originally a family of minor nobility from the Tuscan town of Barberino Val d'Elsa, who settled in Florence during the early part of the 11th century.[1]

Carlo Barberini (1488–1566) and his brother Antonio Barberini (1494–1559) were successful Florentine grain, wool and textile merchants. In 1530 Antonio participated in the defense of the Florentine Republic but after the capture of the city by Imperial troops, and the return to power of the Medici, Antonio grew weary of Medici rule and left Florence in 1537 to oversee Barberini business in Rome.[2]

In 1552, Carlo's son Francesco followed his uncle to Rome and business flourished. Francesco became a very rich man and bought a number of high offices within government and the Catholic church. In 1559, his uncle Antonio was murdered by forces loyal to the Medici.

Francesco continued to build his fortune and amass titles until his death in 1600. Ordinarily his estate would have been "fined" by the Camera Apostolica for operating business while holding church office but his relatives successfully appealed to the head of the organization Francesco had, himself, once directed. The continuation of Barberini business fell to his nephews (the sons of his brother, also Antonio Barberini, who had died in 1571) including Maffeo Barberini.

The Barberini acquired great wealth and influence when Cardinal Maffeo Barberini was elected to the papal throne in 1623, taking the name Pope Urban VIII. He elevated a brother Antonio Marcello Barberini (Antonio the Elder) and two nephews, Francesco Barberini and Antonio Barberini, to the cardinalate.[3] He made another brother Duke of Monterotondo, and gave a third nephew, Taddeo Barberini, the principality of Palestrina.[1] Taddeo was also made Gonfalonier of the Church, Prefect of Rome and Commander of Sant'Angelo.[3]

The ecclesiastical, diplomatic and cultural accomplishments of Urban's reign were overshadowed by the nepotism the pope practised. Urban's contemporary, John Bargrave, wrote:[4]

Likewise, the War of Castro, toward the end of Urban's papacy, sullied Urban's reputation and the popularity of those family members who survived him. It is estimated that during the course of Urban's reign, the Barberini amassed 105 million scudi in personal wealth.[3]

When the pope removed the ancient bronze beams from the portico of the Pantheon to procure bronze for the baldachin of St. Peter's Basilica and for the papal cannon foundry, an anonymous critic punningly wrote:[5]

This translates to "What the barbarians did not do, the Barberini did". The pope erected a tablet proudly proclaiming his re-use of these hidden beams for the glory and defense of the church.

Wars of Castro, exile and restoration 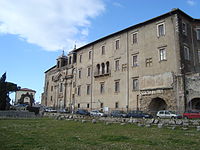 The Palazzo Colonna Barberini in Palestrina; the comune over which various Barberini family members were given control.
Main article: Wars of Castro

The Barberini participated extensively in the First War of Castro. The conflict began when Odoardo Farnese, Duke of Parma and Piacenza, visited Rome and insulted the pope's nephews by suggesting the brothers were too young to manage the Pope's affairs. The war produced no clear victor, and Pope Urban died in 1644, only months after a peace accord was signed.[3]

Despite Urban's appointment of a number of relatives as cardinals, the College of Cardinals elected Pope Innocent X of the Pamphili family. Almost immediately, Innocent X launched an investigation into the conduct of various members of the Barberini family during the wars.[3]

The three nephews who had risen to prominence under their uncle Pope Urban VIII, cardinals Antonio and Francesco and Prince Taddeo were forced into exile and fled to Paris under the protection of Cardinal Mazarin. Antonio and Taddeo left first, by sea, but not before hanging the French coat of arms above the door of the Palazzo Barberini to confirm they were under the protection of France. Francesco joined his brothers soon after.

Taddeo's wife, Anna Colonna also joined her husband and children in Paris but not before making a passionate appeal (in person) to the Pope, urging him not to strip the Barberini of their assets. The Pope agreed and, though he paid some debts out of the Barberini estate, left the Barberini alone.[3]

In Paris they relied on the hospitality of Louis XIV, King of France, until 1653 when most of the family finally returned to Rome. Though Taddeo died in exile in 1647, his brothers eventually reconciled with the papacy through the marriage of Taddeo's younger son Maffeo with Olimpia Giustiniani, a niece of Pope Innocent. Maffeo was given his father's former title, that of Prince of Palestrina.

Taddeo's older son Carlo Barberini was made a cardinal by Pope Innocent X. Taddeo's daughter, Lucrezia Barberini, married Francesco I d'Este, Duke of Modena (who had previously sided with the Farnese during the First War of Castro), further stabilizing relations. 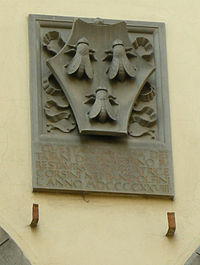 Family coat-of-arms at the Palazzo Barberini.

The 1627 marriage of Taddeo Barberini and Anna Colonna, daughter of Filippo I Colonna began the century-long process which would eventually see the Barberini merge with the Colonna family.

Though Urbano's wives bore him no legitimate male heirs, Urbano fathered a son, Maffeo Callisto Barberini in 1688 prior to any one of his three marriages. The will of Urbano Barberini's last wife, Maria Teresa Boncompagni, makes mention of this Maffeo Callisto as the Marquis of Corese. A large portion of the Barberini estate was left for him in her will.[7]

Later her progeny came into conflict with his over claims to the Barberini estate but the quarrel was settled with an agreement signed in Paris in 1811 which divided the estate between the two claimant branches of the family.

The Colonna line became extinct again on the death of Prince Enrico Barberini-Colonna and the name went to his daughter and heiress Maria and her husband Marquis Luigi Sacchetti, who received the title of Prince of Palestrina and permission to use the Barberini name.

Patrons of the arts

The Palazzo Barberini, the Barberini library (now a core section of the Vatican's Biblioteca Apostolica), and the many buildings, altars, and other projects spread across Rome (and marked with the heraldic three bees) give evidence of the family's wealth, taste and magnificence in the seventeenth century. The family commissioned many artists, such as Lorenzo Ottoni, to undertake various Barberini-centric projects. The family were also important early patrons of opera, maintaining "star" singers like Marc'Antonio Pasqualini on payroll, and building the private Teatro delle Quattro Fontane. Many objects from the Barberini art collections are scattered in museums around the world including:

A nucleus remains in the hands of the family, as well as in the Galleria Nazionale d'Arte Antica, which occupies part of the Palazzo Barberini in Rome. The cultural influence of the dynasty was considerable, and provided the subject for a major international conference in December 2004 (and subsequent publication), entitled I Barberini e la Cultura Europea.

Family tree of the 16th and 17th century Barberini[6] (hereditary patriarchy of the family is indicated by the colored squares).