From Infogalactic: the planetary knowledge core
Jump to: navigation, search
This article is about the type of building. For other uses, see Barbican (disambiguation). 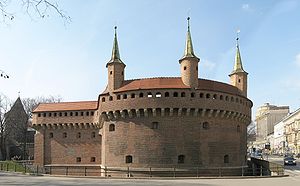 The barbican in Kraków 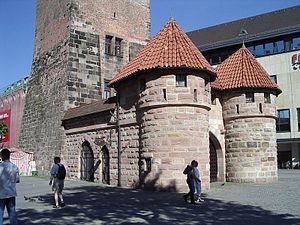 The barbican of the White Tower in Nuremberg (reconstruction)

A barbican is a fortified outpost or gateway, such as an outer defense to a city or castle, or any tower situated over a gate or bridge which was used for defensive purposes. Usually barbicans were situated outside the main line of defences and connected to the city walls with a walled road called the neck. In the 15th century, with the improvement in siege tactics and artillery, barbicans lost their significance. However, several barbicans were built even in the 16th century.

Fortified or mock-fortified gatehouses remained a feature of ambitious French and English residences into the 17th century.

Fortifications in East Asia also featured similar structures. In particular, gates in Chinese city walls were often defended by an additional "archery tower" in front of the main gatehouse, with the two towers connected by walls extending out from the main fortification. Called literally "jar walls", they are often referred to as "barbicans" in English.

The word comes from Latin barbecana, signifying the "outer fortification of a city or castle," with cognates in the Romance languages, deriving ultimately from Arabic barbakh or Persian باب خانه bab-e-khaneh "gate-house" and "towered gateway"[1] or from the medieval English burgh-kenning.[2][3]