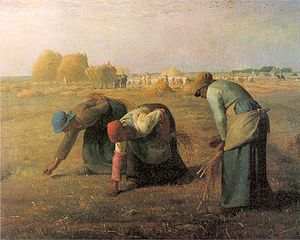 The Barbizon school of painters were part of an art movement towards Realism in art, which arose in the context of the dominant Romantic Movement of the time. The Barbizon school was active roughly from 1830 through 1870. It takes its name from the village of Barbizon, France, near the Forest of Fontainebleau, where many of the artists gathered. Some of the most prominent features of this school are its tonal qualities, color, loose brushwork, and softness of form.[1]

In 1824 the Salon de Paris exhibited works of John Constable, an English painter. His rural scenes influenced some of the younger artists of the time, moving them to abandon formalism and to draw inspiration directly from nature. Natural scenes became the subjects of their paintings rather than mere backdrops to dramatic events. During the Revolutions of 1848 artists gathered at Barbizon to follow Constable's ideas, making nature the subject of their paintings. The French landscape became a major theme of the Barbizon painters.[2]

Millet extended the idea from landscape to figures — peasant figures, scenes of peasant life, and work in the fields. In The Gleaners (1857), for example, Millet portrays three peasant women working at the harvest. Gleaners are poor people who are permitted to gather the remains after the owners of the field complete the main harvest. The owners (portrayed as wealthy) and their laborers are seen in the back of the painting. Millet shifted the focus and the subject matter from the rich and prominent to those at the bottom of the social ladders. To emphasize their anonymity and marginalized position, he hid their faces. The women's bowed bodies represent their everyday hard work.

During the late 1860s, the Barbizon painters attracted the attention of a younger generation of French artists studying in Paris. Several of those artists visited Fontainebleau Forest to paint the landscape, including Claude Monet, Pierre-Auguste Renoir, Alfred Sisley and Frédéric Bazille.[4] In the 1870s those artists, among others, developed the art movement called Impressionism and practiced plein air painting.

Painters in other countries were also influenced by this art. Beginning in the late nineteenth century, many artists came to Paris from Austria-Hungary to study the new movements. For instance, the Hungarian painter János Thorma studied in Paris as a young man. In 1896 he was one of the founders of the Nagybánya artists' colony in what is now Baia Mare, Romania, which brought impressionism to Hungary. In 2013 the Hungarian National Gallery opens a major retrospective of his work, entitled, ''János Thorma, the Painter of the Hungarian Barbizon, 8 February - 19 May 2013, Hungarian National Gallery[5]