Strýcová was a strong junior player, winning two Grand Slams in girls' singles: the 2002 Australian Open and then defending that title at the 2003 Australian Open. She also won three Grand Slam girls' doubles titles between 2001 and 2003.

She reached world number 1 in both singles and doubles on the junior rankings, achieving both in 2002, and was named the ITF Junior World Champion that same year.[1] In her junior career, she beat several players who went on to become notable professionals such as Maria Sharapova, Anna-Lena Grönefeld, Tatiana Golovin, Shahar Pe'er and Maria Kirilenko.

Turning professional in 2003, Strýcová had already worked her ranking into the top 300 after some good results in ITF Women's Circuit events over 2002. She continued to play mostly ITF circuit events throughout the year, and made her Grand Slam debut at Wimbledon, qualifying and losing in the first round to Tatiana Perebiynis. She finished the year ranked world number 161.

2004 turned out to be the year that Strýcová stepped up considerably. She began the year by qualifying for the Australian Open and then reached the fourth round at the WTA tournament in Indian Wells, beating seeded player Eleni Daniilidou before losing to Justine Henin, a result that broke her into the top 100 for the first time. She recorded another notable win over Anna Smashnova in Amelia Island, and won her first two Grand Slam main draw matches at the Australian Open and French Open. After hitting a rough patch in the middle part of the season, she finished the year strongly by reaching her first WTA semifinal at an event in Guangzhou and winning an ITF event in Saint-Raphaël, France. She finished the season ranked world number 56.

Strýcová's progress took a step backwards in 2005, dropping out of the top 100 in the world after failing to back up her breakthrough season and winning just 17 matches throughout the season. Despite this, she achieved some notable results in doubles, reaching four WTA doubles finals and winning the title on two of those occasions. 2006 also begun poorly for her in singles, as she struggled to string together wins and subsequently dropped out of the top 200 of the world rankings in April 2006 before recovering slightly after some good results in ITF events. She married her coach between the 2006 and 2007 seasons. In 2007, Záhlavová-Strýcová played mostly on the ITF circuit once more and achieved some good results, reaching several semifinals throughout the season, but still sat outside the top 100.

After a few years seemingly in limbo, Záhlavová-Strýcová's plugging away at ITF events finally managed to bring with it some results by 2008, winning titles in Fort Walton Beach, Redding (both American events) and Szczecin, Poland, and reaching the second round in WTA events in Amelia Island and Charleston. She qualified for Wimbledon and made the third round of a Grand Slam for the first time in her career thus returning to the top 100, where she remained until the end of the season, her second top-100 year-end finish.

Záhlavová-Strýcová failed to make any progress in her first five tournaments of the season, including at the Australian Open where she lost to Stéphanie Cohen-Aloro, but she enjoyed some success in two small tournaments in Mexico, reaching the semifinals in Acapulco and the quarterfinals in Monterrey, beating top 20 player Flavia Pennetta at the latter event.

Following that, she returned to struggling ways, losing her opening match in all but three tournaments up to July. She fell out of the top 100 after Wimbledon, where she was defending third round points, by losing in the first round to Ekaterina Makarova.

Záhlavová-Strýcová's results improved during the latter part of the year, starting with a quarterfinal appearance at the WTA event in Bad Gastein, as well as reaching the doubles final in Prague. She then played a $25,000 in Trnava, Slovakia, where she reached the semifinals, before qualifying and winning her first round match at the US Open, losing to Victoria Azarenka in the second round. She built on these performances in ITF Women's Circuit events at the end of the season, winning the $100,000+H event in Ortisei, Italy, and the $50,000+H event is Ismaning, Germany, and worked her way back into the top 100 for the end of the season. In doubles, she won two straight events at the WTA tournaments in Quebec City and Luxembourg, her fourth and fifth WTA doubles titles. 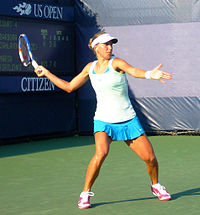 At the 2010 Australian Open, Záhlavová-Strýcová won her first round against Regina Kulikova in a match that lasted 4 hours and 19 minutes – breaking the record for longest match in women's Grand Slam history (which itself was broken a year later by Francesca Schiavone and Svetlana Kuznetsova). She lost in the second round to Dinara Safina. In February and March, she won three doubles titles in Paris, Acapulco and Monterrey, her sixth, seventh and eighth tournament wins in the doubles discipline.

At the French Open, Záhlavová-Strýcová lost in first round to Rossana de los Ríos, before reaching the third round of a Grand Slam for the second time at Wimbledon, where she beat Elena Vesnina and Daniela Hantuchová and lost to Maria Sharapova. Her Wimbledon performance boosted her confidence and thus at the Prague Open she managed to make the first singles final of her career, dismantling Patty Schnyder with the loss of only two games in the semifinals. In the final, she lost to Ágnes Szávay. As a result of her recent form, she rose into the top 50 for the first time in singles following Prague.

Záhlavová-Strýcová continued to enjoy success in doubles for the rest of the season. With her regular partner Iveta Benešová, she won the biggest title of her career at the Premier 5 tournament in Tokyo, and then partnered Renata Voráčová to win Linz, helping her to finish the season in the top 20 of the doubles ranking. In singles competition, she struggled to build on her strong summer results, failing to advance in six of the ten tournaments she played following Prague, among them a first round loss at the US Open to Maria Kirilenko, thus dropping to world number 69 by the end of the year.

Záhlavová-Strýcová defeated Marina Erakovic in the final of the 2011 Bell Challenge to claim her first WTA singles title.

Záhlavová-Strýcová was banned for six months, backdated to 16 October 2012 until 15 April 2013, for doping.[2] The ban disqualified all results during the period of the ban and mandates the return of all prizes won during that period.[3] Záhlavová-Strýcová made her return at the 2013 Porsche Tennis Grand Prix in Stuttgart. She lost in first round of qualifying to Mirjana Lučić-Baroni. In the first round of doubles, she and partner Julia Görges lost to the pairing of Liezel Huber and Janette Husárová. In May, she won the 2013 Empire Slovak Open, a $75,000 ITF event, and her first tournament win since coming back from her ban.

At the 2014 Wimbledon Championships, she defeated reigning Australian Open champion Na Li in third round, in soon-to-be last professional match for world No. 2. Also, she beat Caroline Wozniacki in the 4th round in straight sets after a struggle at the end of the second, during which Wozniacki defended four match points. Advancing to a grand slam singles quarterfinal for the first time, she lost in straight sets to eventual champion, compatriot Petra Kvitová.

Záhlavová-Strýcová started the year strongly, with a semifinal finish at the 2015 ASB Classic in Auckland and a quarterfinal showing in Sydney, losing to Caroline Wozniacki and Tsvetana Pironkova respectively.

On 2 March 2015, she achieved a career-high ranking of World no. 20. It is the first time in the Open Era that the World's Top 20 featured four Czech women with Petra Kvitova at no. 4, Lucie Safarova at no. 11, and Karolína Plíšková at no. 15.

She has been known to be vocal with her dissatisfaction during changeovers, and is noted for racket abuse.[4] In a match against Maria Sharapova at the 2008 Bausch & Lomb Championships she threw her tennis racket and yelled at the chair umpire.[4] In 2010 at Wimbledon, in another match against Sharapova, she twice slammed her racket on the ground.[5]

She was related to tennis player Sandra Záhlavová by marriage, being married to Záhlavová's cousin, former tennis player, Jakub Herm-Záhlava. He was also her coach, having been in that position since 2007.[6] In 2015, the couple divorced and her name was reverted back to Barbora Strýcová.[7]