Barbour County is a county located in north-central West Virginia. At the 2010 census, the population was 16,589.[1] The county seat is Philippi,[2] which was chartered in 1844. Both county and city were named for Philip Pendleton Barbour (1783–1841), a U.S. Congressman from Virginia and Associate Justice of the U.S. Supreme Court. The county was formed in 1843[3] when the region was still part of the state of Virginia. In 1871, a small part of Barbour County was transferred to Tucker County, West Virginia.

The Battle of Philippi, also known as the "Philippi Races", was fought in Barbour County on June 3, 1861. Although a minor action, it is generally considered the first land engagement of the American Civil War.

Alderson Broaddus University, an American Baptist institution, is located in the county. The University's Physician Assistant (PA) program is one of the oldest and best established in the world.

The first white settlement in present-day Barbour County was established in 1780 by Richard Talbott – along with his brother Cotteral and sister Charity – about three miles (5 km) downriver from the future site of Philippi.[4] At this time the region was still a part of Monongalia County, Virginia. The region had had no permanent Indian settlements and so conflicts with Native Americans were relatively infrequent in the early days. Nevertheless, the Talbotts were obliged to leave their homestead several times for safety and twice found it necessary to retreat back east of the Alleghenies, returning each time. No member of this eventually large family was ever killed by Indian attacks.[5]

Over time, parts of the future Barbour County were included in the newly created Harrison (1784), Randolph (1787), and Lewis (1816) Counties. Barbour County itself was created in 1843 and named for the late Virginia politician and jurist Philip Pendleton Barbour (1783–1841). (Barbour had served as a U.S. Congressman from Virginia, Speaker of the House, and Associate Justice of the United States Supreme Court.) The settlement of Philippi – formerly "Anglin's Ford" and "Booth's Ferry" – was platted, named, and made the county seat in the same year; it was chartered in 1844. By the 1850s, when a major covered bridge was constructed at Philippi to service travellers on the Beverly-Fairmont Turnpike, the County's population was approaching 10,000 people.

In April 1861, an Ordinance of Secession from the United States of America was approved throughout the state of Virginia in a referendum. Delegates from 25 western counties, however, assembled at Wheeling on 13 May for the first of a two meetings (see Wheeling Convention) called to repeal the Ordinance. The delegates from Barbour County for the first convention were Spencer Dayton, John H. Shuttleworth, and E.H. Manafee.

On 3 June 1861, Philippi was the scene of the first land battle of the American Civil War. The battle was later lampooned as the "Philippi Races" because of the hurried retreat by the Confederate troops encamped in the town. (The skirmish is reenacted every June during the town's "Blue and Gray Reunion".) At daylight on June 3, two columns of Union forces under the command of Col. Benjamin Franklin Kelley and Col. Ebenezer Dumont, with perhaps 3,000 men, arrived from Grafton and attacked about 800 poorly armed Confederate recruits under the command of Col. George A. Porterfield. The Union troops had marched all night through a heavy rain storm to arrive just before daylight. The surprise attack awakened the sleeping Confederates. After firing a few shots at the advancing Union troops, the Southerners broke lines and began running frantically to the south, some still in their bed clothes.

The Union victory in a relatively bloodless battle propelled the young Major General George B. McClellan into the national spotlight, and he would soon be given command of all Union armies. The battle also inspired more vocal protests in the Western part of Virginia against secession. On 11 June, the second Wheeling Convention met in that city and Barbour County was again represented by Dayton and Shuttleworth, who were this time joined by N.H. Taft. The Convention nullified the Virginia Ordinance of Secession and named Francis H. Pierpont governor. These events would eventually result in the separate statehood of West Virginia.

The economy and infrastructure in Barbour grew steadily, but slowly, through the late 19th century. Although the first railroad had reached nearby Grafton in 1852, a narrow-gauge railroad was not laid through the County until the early 1880s; a standard gauge line followed in the 1890s.

In 1990, private developers offered Barbour County citizens $4M to $6M annually in host fees to accept out-of-state garbage into a County landfill over the following three decades. Up to 200,000 tons of garbage per month would be delivered.[6] (At the time, the County's annual budget was only about $1M.) County voters rejected the offer.[7]

Barbour County is situated on the Allegheny Plateau at the western edge of the Allegheny Mountains (represented by Laurel Mountain at the County's eastern boundary). Most of the County is drained by the Tygart Valley River which traverses it from south to north and on which its three largest settlements – Philippi, Belington, and Junior – are sited. Tributaries of the Tygart in the County include Teter Creek, Laurel Creek, Hacker's Creek, the Buckhannon River and the West Fork River. A portion of the County in the west drains into the Middle Fork River, principally through Elk Creek. Audra State Park – the County's only state park – is situated on the Middle Fork in the southwest corner. Teter Creek Lake Wildlife Management Area – the County's only WMA – is located on that stream and lake in the eastern portion. All of the mentioned streams are part of the greater Monongahela River watershed.

Bituminous coal mining has been significant in Barbour; seven times as much tonnage has been produced from underground as by surface mining. Natural gas and oil wells provide a modest amount of employment. Wholesale lumber production (wood and wood products) is also present. (The county is a member of the West Virginia Hardwood Alliance Zone.) There is notable production of eggs and horse raising, but the major agricultural products are livestock, forage, dairy foods and orchard fruits. 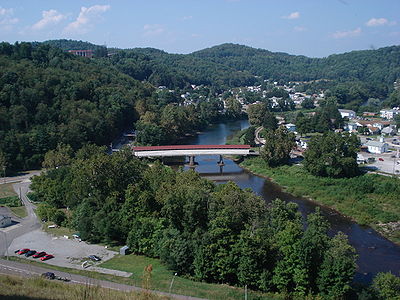 Barbour County is divided into eight magisterial districts: Barker, Cove, Elk, Glade, Philippi, Pleasant, Union and Valley. Philippi District is sub-divided into that city's four wards. The town of Belington, however, has its Wards 1 and 2 in Valley District and Wards 3 and 4 in Barker District.