It is the main airport of Catalonia, the second largest in Spain behind Madrid Barajas Airport and one of the busiest in the world. It is a main base for Vueling, a hub for Iberia Regional and low-cost giant Ryanair as well as a focus city for Air Europa. The airport mainly serves domestic, European and North African destinations, also having flights to Middle East (Egypt, Israel, Jordan, Dubai, Qatar), Asia (China and Singapore), Latin America (Argentina, Brazil and Colombia), North America (United States and Canada) and Sub-Saharan Africa (Senegal, Gambia, Ghana and Cabo Verde). The Airport was a hub for Spanair before it suspended services on 27 January 2012.[6]

The Barcelona–Madrid air shuttle service, known as the "Puente Aéreo" (in Spanish), or "Pont Aeri" (in Catalan) literally "Air Bridge", was the world's busiest route until 2008, with the highest number of flight operations (971 per week) in 2007.[7] The schedule has been reduced since February 2008, when a Madrid–Barcelona high-speed rail line was opened, covering the distance in 2 hours 30 minutes, and quickly became popular.

Barcelona's first airfield, located at El Remolar, began operations in 1916. However, it did not have good expansion prospects, so a new airport at El Prat opened in 1918. The first plane was a Latécoère Salmson 300 which arrived from Toulouse with final destination Casablanca. The airport was used as headquarters of the Aeroclub of Catalonia and the base for the Spanish Navy's Zeppelin fleet. Scheduled commercial service began in 1927 with an Iberia service to Madrid Cuatro Vientos Airport. This was Iberia's first route. During the time of the Second Spanish Republic El Prat was one of the bases of LAPE (Líneas Aéreas Postales Españolas).[9]

In 1948, a runway was built (now called runway 07-25); in the same year the first overseas service was operated by Pan American World Airways to New York City, using a Lockheed Constellation. Between 1948 and 1952, a second runway was constructed (runway 16–34), perpendicular to the previous, also taxiways were constructed and a terminal to accommodate passengers. In 1963, the airport reached one million passengers a year. A new control tower was built in 1965. In 1968, a new terminal was opened, which still exists and is in use as what is now Terminal 2B.[10]

On 3 August 1970, Pan American World Airways inaugurated regular service between Barcelona, Lisbon and New York, operated by a Boeing 747. On 4 November of the same year, Iberia began the "Air-shuttle" service between Barcelona and Madrid-Barajas. A few years later, in 1976, a terminal was built specifically for Iberia's air-shuttle service and a terminal exclusively for cargo, an annexed mail service and an aircraft ramp for air cargo. In 1977, the airport handled over 5 million passengers annually.

From the late seventies to the early nineties, the airport was stalled in traffic and investments until the 1992 Summer Olympics held in Barcelona. El Prat underwent a major development consisting of the modernization and expansion of the existing terminal, which became known as Terminal B, and the construction of two further terminals flanking that, known as Terminals A and C respectively.[10] The development included jetways for direct access to the aircraft. This reform was designed by architect Ricardo Bofill Levi.

In 1992, a new control tower was inaugurated also designed by Ricardo Bofill Levi, but this was replaced by another much needed control tower in 2006. 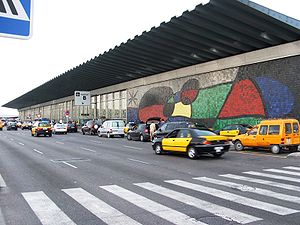 Terminal 2B with artwork by Miró

Due to the strong drop in air traffic after 1999 and the crisis in the aviation sector in 2001 many charter operations from Girona and Reus were diverted to El Prat, which helped the airport to survive the crisis. 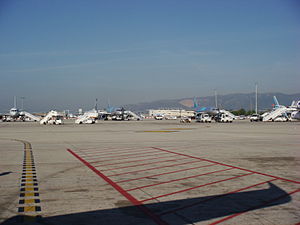 On 1 February 2014, Barcelona–El Prat was the first Spanish airport to receive a daily flight with the Airbus A380, on the Emirates route to Dubai International Airport. Emirates also offers a second daily flight, but with Boeing 777 aircraft.

One of the main airlines that operates out of Barcelona, Norwegian Air Shuttle, has announced its intention of starting long-haul routes out of Barcelona–El Prat, from 2016, to destinations such as Los Angeles, San Francisco, New York, Orlando and Miami, operated by Boeing 787 aircraft.

Most of the traffic at Barcelona Airport is domestic and European, in which Vueling has an operational base. Intercontinental connections have not generated a significant amount of passenger traffic during the last years. In the early twenty-first century the airport passenger carried numbers and the number of operations increased significantly.

Low-cost airline traffic grew significantly, especially after the creation of operating bases by Vueling and Clickair at the airport. Vueling and Clickair merged in July 2009, operating under the Vueling name. Other low-cost airlines operate from the airport, including Ryanair, EasyJet, Norwegian Air Shuttle, EasyJet Switzerland, Wizz Air and Transavia.com. A new base was established at the airport in September 2010.

The airport has 3 runways, two parallel, nominated 07L/25R and 07R/25L (the latter opened in 2004), and a cross runway 02/20. There are two terminals: T2, which is the sum of the previous Terminals A, B and C, located on the north side of the airport and T1, on the west side, which opened on 16 June 2009. As of 2014[update] the two terminals had a combined total of 268 check-in counters and 64 boarding gates. Operations at the airport are restricted exclusively to Instrument flight rules (IFR) flights, except for sanitary, emergency and government VFR flights.

A plan for expansion (Plan Barcelona)[11] was completed in 2009, adding a third terminal building (also designed by Ricardo Bofill) and control tower. An additional runway (07R/25L) was also built. The airport became capable of handling 55 million passengers annually (up from 33 million in 2007). The airport expanded in area from 8.45 to 15.33 square kilometres (3.26 to 5.92 sq mi). Further expansion was planned to be finished by 2012, with a new satellite terminal to raise capacity to 70 million passengers annually.

The airport is the subject of a political discussion over management and control between the Generalitat of Catalonia and the Spanish Government, which has involved AENA (airport manager) and various airlines, Iberia and Spanair mainly. Part of the controversy is about the benefits that the airport generates, which are used in maintenance and investments in other airports in the network of AENA and government investments in other economic areas.[by whom?]

Terminal 1 from the tarmac 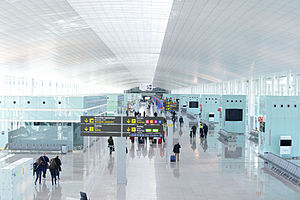 The terminal handles both Schengen and non-Schengen flights.

The forecast is that the airport will be able to handle 55 million passengers annually and will reach 90 operations an hour.

The extension of the airport with a total investment of €5.1 billion in the future[when?] will include a new satellite terminal and refurbishment of existing terminals. The civil engineering phase of the South Terminal has been made possible by a budget of €1 billion.

Terminal 2 is divided into three linked sections, known as Terminal 2A, 2B and 2C. Terminal 2B is the oldest part of the complex still in use, dating back to 1968. Terminals 2A and 2C were added in order to expand the airport capacity before the arrival of the 1992 Summer Olympics held in city.[10] This expansion was also designed by Ricardo Bofill Levi.

Following the opening of Terminal 1 in 2009, Terminal 2 became almost empty until the airport authorities lowered landing fees to attract low-cost and regional carriers to fill the terminal. Whilst this has helped, the complex is nowhere near full capacity and Terminal 2A is currently unused. Terminal 2C is used only by EasyJet and EasyJet Switzerland flights, with flights to the UK using module M0, whilst flights to the rest of Europe use module M1. Terminal 2B is mostly used by Ryanair and others. And T2A is adapted for large airplanes, such as B777. 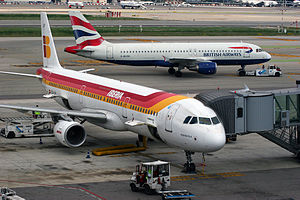 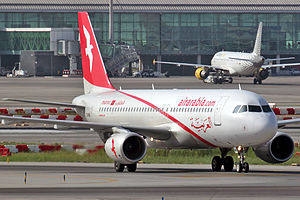 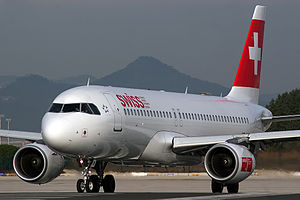 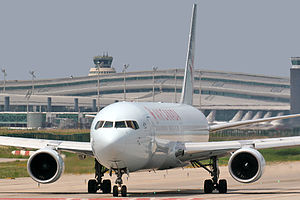 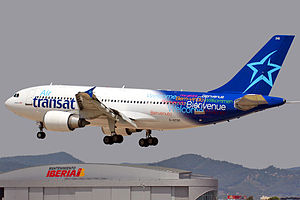 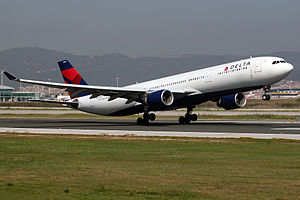 Graphical volume of passenger traffic between 1963 and 2006

Terminal 2 has its own Rodalies Barcelona commuter train station on the line R2, which runs from the Maçanet-Massanes station every 30 minutes, with major stops at Barcelona Sants railway station and the fairly central Passeig de Gràcia railway station to provide transfer to the Barcelona Metro system, also in Clot station. Passengers for T1 must take a connecting bus from Terminal 2B to Terminal 1. As part of the major expansion above, a new shuttle train is going to be built from Terminal 1 to Barcelona Sants (connected with the high speed train, the AVE) and Passeig de Gràcia Stations is expected by April 2018. The airport will also be connected by subway in February 2016 by Line 9 of the Barcelona Metro as announced by the Catalan Government.

There is provision for parking cars at the airport, with about 24,000 parking spaces.

Taxi ranks exist outside any of the main terminal exits Terminal 1 (T1) or Terminal 2 (and of the 3 buildings of Terminal 2 - T2A, T2B or T2C). Taxis operate continuously. The journey to the city centre will take between 25 to 40 minutes depending on road conditions. If you are travelling from Terminal 1 rather than Terminal 2, this will add an extra 4 km to your journey and take approximately 5 minutes more.