In linguistics, the minimalist program (MP) is a major line of inquiry that has been developing inside generative grammar since the early 1990s, starting with a 1993 paper by Noam Chomsky.[1]

Chomsky presents MP as a program, not as a theory, following Imre Lakatos's distinction.[2] The MP seeks to be a mode of inquiry characterized by the flexibility of the multiple directions that its minimalism enables. Ultimately, the MP provides a conceptual framework used to guide the development of grammatical theory. For Chomsky, there are minimalist questions, but the answers can be framed in any theory. Of all these questions, the one that plays the most crucial role is this: why language has the properties it has.[3] The MP lays out a very specific view of the basis of syntactic grammar that, when compared to other formalisms, is often taken to look very much like a theory.[citation needed]

The MP appeals to the idea that the language ability in humans shows signs of being incorporated under an optimal design with exquisite organization, which seems to suggest that the inner workings conform to a very simple computational law or a particular mental organ. In other words, the MP works on the assumption that universal grammar constitutes a perfect design in the sense that it contains only what is necessary to meet our conceptual and physical (phonological) needs.[4]

From a theoretical standpoint, and in the context of generative grammar, the MP draws on the minimalist approach of the principles and parameters program, considered to be the ultimate standard theoretical model that generative linguistics has developed since the 1980s. What this approach suggests is the existence of a fixed set of principles valid for all languages, which, when combined with settings for a finite set of binary switches (parameters), may describe the specific properties that characterize the language system a child eventually comes to attain.[5]

The MP aims to get to know how much of the principles and parameters model can be taken as a result of this hypothetical optimal and computationally efficient design of the human language faculty. In turn, more developed versions of the Principles and Parameters approach provide technical principles from which the MP can be seen to follow.[6]

The MP aims at the further development of ideas involving economy of derivation and economy of representation, which had started to become significant in the early 1990s, but were still peripheral aspects of transformational grammar.[7]

The exploration of minimalist questions has led to several radical changes in the technical apparatus of transformational generative grammatical theory. Some of the most important are:[8]

A major development of MP inquiry is bare phrase structure (BPS), a theory of phrase structure (sentence building prior to movement) developed by Noam Chomsky.[9] The introduction of BPS has moved the Chomskyan tradition toward the dependency grammar tradition, which operates with significantly less structure than most phrase structure grammars.[10]

This theory contrasts with X-bar theory, which preceded it, in four important ways:

BPS incorporates two basic operations: "merge" and "move". Although there is active debate on exactly how "move" should be formulated, the differences between the current proposals are relatively minute. The following description follows Chomsky's original proposal.

Merge is a function that takes two objects (say α and β) and merges them into an unordered set with a label (either α or β, in this case α). The label identifies the properties of the phrase.

Furthermore, the phrase "drink water" can not typically be put in the same places as the noun water:

So, the phrase is identified with a label. In the case of "drink water", the label is drink since the phrase acts as a verb. For simplicity, this phrase is called a verb phrase (VP). If "cold" and "water" were merged to get "cold water", this would be a noun phrase (NP) with the label "water"; it follows that the phrase "cold water" can appear in the same environments as the noun water in the three test sentences above. So, for drink water, there is the following:

This can be represented in a typical syntax tree as follows:

Merge can also operate on structures already built. If it could not, then such a system would predict only two-word utterances to be grammatical. If a new head is merged with a previously formed object (a phrase).

Here, γ is the label, so that γ "projects" from the label of the head. This corresponds to the following tree structure: 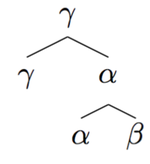 Merge operates blindly, projecting labels in all possible combinations. The subcategorization features of the head then license certain label projections and eliminate all derivations with alternate projections.

A "phase" is a syntactic domain first hypothesized by Noam Chomsky in 1998.[11] A simple sentence is often decomposed into two phases, CP and vP (see X-bar theory). Movement of a constituent out of a phase is (in the general case) only permitted if the constituent has first moved to the left edge of the phase. This condition is described in the "phase impenetrability condition", which has been variously formulated within the literature. In its original conception, only the vP in transitive and unergative verbs constitute phases. The vP in passives and unaccusative verbs (if even present) are not phases. This topic is, however, currently under debate in the literature.[12]

In the late 1990s, David E. Johnson and Shalom Lappin published the first detailed critiques of Chomsky's minimalist program.[13] This technical work was followed by a lively debate with proponents of minimalism on the scientific status of the program.[14][15][16] The original article provoked several replies[17][18][19][20][21] and two further rounds of replies and counter-replies in subsequent issues of the same journal.

Lappin et al. argue that the minimalist program is a radical departure from earlier Chomskyan linguistic practice that is not motivated by any new empirical discoveries, but rather by a general appeal to "perfection", which is both empirically unmotivated and so vague as to be unfalsifiable. They compare the adoption of this paradigm by linguistic researchers to other historical paradigm shifts in natural sciences and conclude that the adoption of the minimalist program has been an "unscientific revolution", driven primarily by Chomsky's authority in linguistics. The several replies to the article in Natural Language and Linguistic Theory Volume 18 number 4 (2000) make a number of different defenses of the minimalist program. Some claim that it is not in fact revolutionary or not in fact widely adopted, while others agree with Levine and Johnson on these points, but defend the vagueness of its formulation as not problematic in light of its status as a research program rather than a theory (see above).

Further readings on the minimalist program

Much research has been devoted to the study of the consequences that arise when minimalist questions are formulated. This list is not exhaustive.

Works on the main theoretical notions and their applications