From Infogalactic: the planetary knowledge core
Jump to: navigation, search
This article is about the town in County Durham, England. For the castle of the same name situated in the town, see Barnard Castle (castle).

Barnard Castle is a market town in Teesdale, County Durham, England. It is named after the castle around which it grew up. It is the main settlement in the Teesdale area, and is a popular tourist destination. The Bowes Museum has the best collection of European fine and decorative arts in the North of England, housed in a "magnificent" 19th-century French-style chateau.[2] Its most famous exhibit is the 18th-century Silver Swan automaton, though art includes work by Goya and El Greco.

Barnard Castle sits on the north bank of the River Tees, opposite Startforth and 21 miles (34 km) south-west of the county town of Durham. Nearby towns include Bishop Auckland to the north-east, Darlington to the east and Richmond in North Yorkshire to the south-east.

Barnard Castle's largest single employer is the pharmaceuticals giant GlaxoSmithKline, which has a manufacturing facility on the outskirts of town.[3][4][5]

Before the Norman conquest the upper half of Teesdale had been combined into an Anglo-Norse estate which was centred upon the ancient village of Gainford and mortgaged to the Earls of Northumberland. The first Norman Bishop of Durham, Bishop Walcher, was murdered in 1080. This led to the surrounding country being attacked and laid waste by the Norman overlords. Further rebellion in 1095 caused the king William II to break up the Earldom of Northumberland into smaller baronies. The Lordship of Gainford was given to Guy de Balliol. The earthwork fortifications of the castle were re-built in stone by his successor, Bernard de Balliol I during the latter half of the 12th century.[6] The castle passed down through the Balliol family (of which the Scottish king, John Balliol, was the most important member) and then into the possession of Richard Neville, Earl of Warwick. King Richard III inherited it through his wife, Anne Neville, but it fell into ruins in the century after his death.

The remains of the castle are a Grade I listed building, whilst the chapel in the outer ward is Grade II* listed.[7] Both sets of remains are now in the care of English Heritage and open to the public.

Walter Scott frequently visited his friend John Sawrey Morritt at Rokeby Hall and was fond of exploring Teesdale. He begins his epic poem Rokeby (1813) with a man standing on guard on the round tower of the Barnard Castle fortress.[8]

Charles Dickens and his illustrator Hablot Browne (Phiz) stayed at the King's Head in Barnard Castle while researching his novel Nicholas Nickleby in the winter of 1837-38. He is said to have entered William Humphrey's clock-maker's shop, then opposite the hotel, and enquired who had made a certain remarkable clock. William replied that his boy Humphrey had done it. This seems to have prompted Dickens to choose the title "Master Humphrey's Clock" for his new weekly, in whichThe Old Curiosity Shop and Barnaby Rudge appeared.[9][10][11] 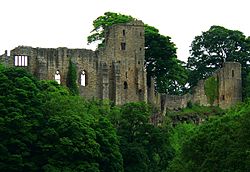 The castle at Barnard Castle

The Bowes Museum, housed in a chateau-like building, was founded by John Bowes and his wife Josephine, and is of national status. It contains an El Greco, paintings by Goya, Canaletto, Boucher, Fragonard and a collection of decorative art. A great attraction is the 18th century silver swan automaton, which periodically preens itself, looks round and appears to catch and swallow a fish.

John Bowes lived at nearby Streatlam Castle (now demolished). His Streatlam stud never had more than ten breeding mares at one time, but produced no fewer than four Derby winners in twenty years. The last of these, "West Australian", was the first racehorse to win the Triple Crown (1853).

Although never a big manufacturing centre, in the 18th century industry centred on hand loom wool weaving, and in the early 19th century the principal industry was spinning and the manufacture of shoe thread.[17] 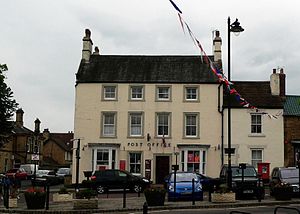 Barnard Castle is for all purposes (historic, ceremonial and administrative) located in County Durham.

Barnard Castle was the administrative centre of the former Teesdale district of County Durham until its abolition on 1 April 2009. The town is now administered by Durham County Council Unitary Authority, as principal authority and by Barnard Castle Town Council, as a parish. The Town Council elects a ceremonial Town Mayor annually. It is part of the Bishop Auckland parliamentary constituency, which as of 2010 is represented in parliament by Helen Goodman (Labour). It is in the North East England region, which serves as a constituency for the European Parliament.[18] Between 1894 and 1967 the town was administratively part of Barnard Castle Urban District.[19]

The local police force is Durham Constabulary. The town is the base for the Barnard Castle division, which covers 300 square miles (780 km2). This division is within the force's south area.

The most important employer in Barnard Castle is GlaxoSmithKline which has a large pharmaceutical manufacturing plant on the outskirts of the town which employs around 1000 people.[20] GSK has invested £80 million into the plant since 2007.[21]

Barnard Castle is located in a picturesque area of Teesdale and tourism is important to the local economy. Several holiday parks are located nearby including a Camping and Caravanning Club site. The town has a number of antique shops and an antique centre which attracts antique buyers from all around the world. The High Street has many independent shops.

Nearby Startforth has a young offenders' institution.

Barnard Castle has road connections to Bishop Auckland, Spennymoor and central County Durham via the A688 and Darlington, Stockton-on-Tees, and Middlesbrough by the A67. Barnard Castle is also located 4 miles (6.4 km) from the A66 with access to both the M6 to the west and the A1(M) to the east. The B6278 also connects Barnard Castle with Middleton-in-Teesdale.

Unusually, Barnard Castle was served by two railways stations. A Bill was approved in 1854 for a line from a junction with the Stockton & Darlington Railway at Darlington to Barnard Castle and opened on 9 July 1856, with intermediate stations at Broomielaw, Winston, Gainford & Piercebridge. The terminus at Darlington only lasted five years. In 1856 the South Durham & Lancashire Railway proposed a line from Bishop Auckland to Tebay via Barnard Castle and Kirkby Stephen but only the western section was built with the Company receiving its Bill in 1857. The line opened on 8 August 1861 from a second terminus at Barnard Castle to a junction with the Lancaster & Carlisle Railway at Tebay with intermediate stations at Lartington, Bowes, Barras, Kirkby Stephen, Ravenstondale & Gaisgill. The two stations at Barnard Castle were some distance apart; the earliest station became a through station and closed to passengers on 1 May 1862, but remained in use as a goods depot. The second station was closed under the Beeching cuts on 5 April 1965 and the site was eventually built on by Glaxo Smith Kline.[22] Today rail access is via Bishop Auckland, 15 miles (25 km) or Darlington, 16 miles (26 km). 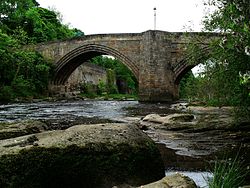 Barnard Castle School, an independent co-educational boarding school, is located on the eastern edge of the town. Its notable former pupils include: ex-England Rugby players Rob Andrew, now Director of Elite Rugby for the Rugby Football Union (RFU), the Underwood brothers, Tony and Rory along with present England player Mathew Tait and his younger brother Alex, member of the Newcastle Falcons and England U20s team.

Students Rory Clegg, and Alex Gray were members of the England Under 18 rugby union squad.[23]

Teesdale School is an 11-18 comprehensive school on the outskirts of the town, just off the A688.

Green Lane school is a primary school for 4-11 year olds, situated on a road of the same name not far from Teesdale School.

The annual live music festival, organised by Teesdale Community Resources in conjunction with the Barnard Castle Meet Committee, runs over the Whit weekend alongside the many other 'Meet' activities. It is a three-day event with out-of-town bands playing on the Saturday and local bands & up and coming TCR bands playing on the Sunday and Monday. It is a family friendly event and entrance is totally free.

The Barnard Castle Meet is an annual carnival festival held on the second bank holiday weekend in May, the schools' summer half-term week. The Meet, as it is known locally, has grown from the North East Cyclists' Meet dating back to 1885, and since the early 1900s the town has staged a carnival and grand procession through the town centre on the bank holiday Monday. The weekend is now probably the largest event in the Barnard Castle and Teesdale calendar. There are around twenty separate events that the Meet Committee asserts 'reach every corner of the community'. In recent years, with the R 'n' B festival no longer in the Meet Weekend programme, the Committee has staged its own music event showcasing local and national talent on the Sunday and Monday, with all technical and musical support from Teesdale Community Resources (TCR). The 2010 Meet, the largest for several years, began with the Crowning of the Meet Queen on 29 May.

The Barnard Castle Band, founded in 1860, is a brass band based in the town, well known outside the area as a result of the march Barnard Castle by Goff Richards.[24]