Barney Bush[2] (birth name Bernard Bush; September 30, 2000 – February 1, 2013)[3] was a Scottish Terrier owned by former U.S. President George W. Bush and former First Lady Laura Bush. Barney had his own official web page which redirected to an extension of the White House website. Barney was born in New Jersey and he was often referred to as the "First Dog". 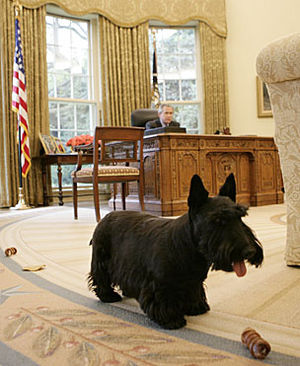 Barney at play in the Oval Office.

Barney is said to have enjoyed playing with volleyballs and golf balls, and enjoyed observing games of horseshoes. There are various web sites across the Internet devoted to Barney. Most notably, he was the main star of the White House's annual Christmas videos during the Bush administration.

Barney was featured in several films that go by the name of Barneycam and are made by the White House Staff, and star both Barney himself and Miss Beazley, the other presidential canine. These movies can be found on the George W. Bush archived White House web site. 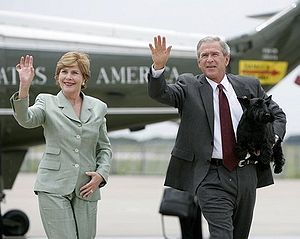 Barney was evoked in a famous Bush quote cited by Bob Woodward about the Iraq War in State of Denial: Bush at War, Part III (ISBN 0743272234) and repeated during a 60 Minutes interview:

"Late last year he had key Republicans up to the White House to talk about the war. And said, 'I will not withdraw even if Laura and Barney are the only ones supporting me.' Barney is his dog," Woodward says. "My work on this leads to lots of people who spend hours, days with the president."[4]

White House official Karl Rove remarked shortly after his resignation that Barney was "a lump." Barney has also been criticized by Russian President Vladimir Putin who feels a world leader should own large robust dogs, not smaller breeds such as the Scottish Terrier. At a later date, when Putin introduced Bush to Koni, his black labrador, Putin is reported to have remarked that Koni is "(b)igger, tougher, stronger, faster, meaner, than Barney."[5]

On November 27, 2006, Barney was featured in an article in satirical newspaper The Onion titled "Troop Morale Boosted By Surprise Visit From First Dog".[6] The article described a fictitious visit by Barney to troops in Iraq.

On December 14, 2006, The Daily Show satirized Barney's Holiday Extravaganza.[7] Barney was, at one point, satirized in "The Bugle".

On January 23, 2007, Scottie Tails posted a satire video of a Wheaten-colored terrier named Kenzie asking Barney to contact her about a date.[8][9]

On November 6, 2008, Barney bit Reuters news reporter Jon Decker's finger.[10] Barney had bitten Boston Celtics public relations director Heather Walker on the wrist on September 19, 2008 breaking the skin and drawing blood, but the incident was not reported until after the November 6 elections. Laura Bush's spokesperson joked afterwards that "I think it was his way of saying he was done with the paparazzi."[11]

On February 1, 2013, Bush posted this to his Facebook page, Statement by President George W. Bush on the passing of Barney Bush:

Laura and I are sad to announce that our Scottish Terrier, Barney, has passed away. The little fellow had been suffering from lymphoma and after twelve and a half years of life, his body could not fight off the illness.

Barney and I enjoyed the outdoors. He loved to accompany me when I fished for bass at the ranch. He was a fierce armadillo hunter. At Camp David, his favorite activity was chasing golf balls on the chipping green.

Barney guarded the South Lawn entrance of the White House as if he were a Secret Service agent. He wandered the halls of the West Wing looking for treats from his many friends. He starred in Barney Cam and gave the American people Christmas tours of the White House. Barney greeted Queens, Heads of State, and Prime Ministers. He was always polite and never jumped in their laps. Barney was by my side during our eight years in the White House. He never discussed politics and was always a faithful friend. Laura and I will miss our pal.[3]

Barney was survived by the Bushes’ other Scottish Terrier, Miss Beazley, who later died in 2014.[12]

Barney and Miss Beazley are honored with a bronze sculpture at the George W. Bush Library.[13] 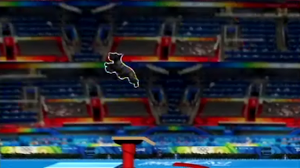 Barney in A Red, White, and Blue Christmas.

Barney has starred in eleven government film productions. His latest, Barney Cam VII: A Red, White and Blue Christmas, is a 2008 Christmas video featuring George W. Bush and members of his immediate family, and many American Olympians.[14] In it, he dreams of winning several honors for the United States before being woken up by President Bush, who needs Barney's help in preparing for Christmas.