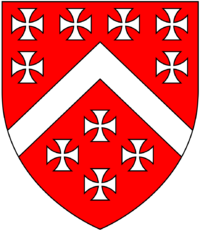 Arms of Berkeley: Gules, a chevron between ten crosses pattée six in chief and four in base argent. Motto: Virtute non Vi, "By virtue not by force" 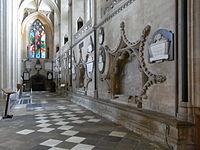 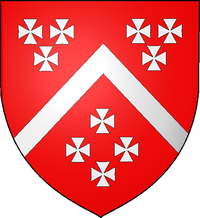 The title Baron Berkeley originated as a feudal title and was subsequently created twice in the Peerage of England by writ. It was first granted by writ to Thomas II de Berkeley, 1st Baron Berkeley (1245–1321), 6th feudal Baron Berkeley, in 1295, but the title of that creation became extinct at the death of his great-great-grandson, the fifth Baron by writ, when no male heirs to the barony by writ remained, although the feudal barony continued. The next creation by writ was in 1421, for the last baron's nephew and heir James Berkeley. His son and successor William was created Viscount Berkeley in 1481, Earl of Nottingham in 1483, and Marquess of Berkeley in 1488. He had no surviving male issue, so the Marquesate and his other non-inherited titles became extinct on his death in 1491, whilst the barony passed de jure to his younger brother Maurice. However William had disinherited Maurice because he considered him to have brought shame on the noble House of Berkeley by marrying beneath his status to Isabel, daughter of Philip Mead of Wraxhall, an Alderman and Mayor of Bristol. Instead he bequeathed the castle, lands and lordships comprising the Barony of Berkeley to King Henry VII and his heirs male, failing which to descend to William's own rightful heirs. Thus on the death of King Edward VI in 1553, Henry VII's unmarried grandson, the Berkeley inheritance returned to the family. Therefore, Maurice and his descendants from 1492 to 1553 were de jure barons only, until the return of the title to the senior heir Henry (and indirectly to his mother Anne), becoming de facto 7th Baron in 1553.[2] Upon his death he was succeeded by his relative George Harding. His son, the ninth Baron, was created Earl of Berkeley and Viscount Dursley, which remained united to the barony until the death of the sixth Earl in 1882, when the earldom passed to a male heir and the barony passed to a female one, Louisa Milman. At Louisa's death, the barony went to Eva Mary Foley, upon whose death the barony fell into abeyance. The abeyance was terminated a few years later in favour of Mary Lalle Foley-Berkeley. Upon her death, the barony went to her nephew Anthony Gueterbock, who is the present holder. In 2000, he was created Baron Gueterbock for life in the Peerage of the United Kingdom. The epithets of each baron were coined by John Smyth of Nibley (d.1641), steward of the Berkeley estates, the biographer of the family and author of "Lives of the Berkeleys".

The feudal barony of Berkeley was created circa 1155, when King Henry II granted the royal castle of Berkeley to Robert Fitzharding under the feudal land tenure per baroniam. Prior to that time the castle had been held in fee-farm by Roger I "de Berkeley", a Norman noble, possibly a son of Roger I of Tosny (died circa 1040),[3] who acquired the surname "de Berkeley". He held extensive lands, including Dursley, in-chief of the king in 1086, as recorded by Domesday Book. He retired as a monk to St Peter's Abbey, Gloucester, about 1091.

His son Roger II (d. about 1131) and grandson Roger III (d. after 1177) also held the manor of Dursley in-chief of the king. In 1152 Roger III was deprived of the farm of Berkeley during the civil war between King Stephen and the Empress Maud. He was later restored to Dursley, and founded the family of "Berkeley of Dursley",[4] but Berkeley Castle was granted by barony to Robert FitzHarding, a native Englishman and royal financier of Bristol, whose family also took the name "de Berkeley". To mollify the ill-feelings of Roger of Dursley, Henry II encouraged each family to marry their respective male heirs to the eldest daughters of the other, which was successfully accomplished.[5]

From 1295 the feudal barony continued concurrently with the barony by writ.

The feudal barony continued until the Tenures Abolition Act 1660

The heir apparent is his son the Hon. Thomas FitzHardinge Gueterbock (b. 1969)

The Earldom of Berkeley, together with the Viscountcy Dursley, was separated from the barony in 1882, but the accession was not fully established. In 1942 both titles became extinct or dormant.