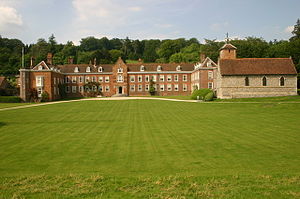 Stonor House, the seat of the Baron Camoys.

By his first wife, Margaret de Brewes, Ralph de Camoys (d.1336) had a son, Thomas de Camoys, 2nd Baron Camoys, (d.1372) who married a wife named Margaret, and by her had a son, Ralph Camoys. This first creation of the barony expired with the death on 11 April 1372 without male heirs of Thomas de Camoys, 2nd Baron Camoys, his son, Ralph having predeceased him.[3]

Thomas de Camoys (d.1421) was twice married, firstly to Elizabeth Louches, the daughter of William Louches of great Milton and Chiselhampton, and secondly to Elizabeth Mortimer, daughter of Edmund Mortimer, 3rd Earl of March, and widow of Henry 'Hotspur' Percy.[6] By his first wife, Elizabeth Louches, he had a son, Sir Richard Camoys, who married Joan Poynings, and by her had three sons, John, Ralph and Hugh, and two daughters, Margaret and Eleanor.[7] Sir Richard Camoys predeceased his father, dying sometime before 24 June 1416.[8]

The barony was inherited by Sir Richard's third son, Hugh de Camoys, 2nd Baron Camoys, who died a minor and a ward of the King on 18 June 1426.[9] On his death the barony fell into abeyance between his sisters, Margaret and Eleanor. It remained in abeyance for 413 years until 1839, when Thomas Stonor, 3rd Baron Camoys successfully claimed the barony as a descendant of Margaret de Camoys.[10] He had previously represented Oxford in the House of Commons and later held office as a Lord-in-Waiting (government whip in the House of Lords) in the Liberal administrations of Lord John Russell, Lord Palmerston and William Ewart Gladstone as well as in the coalition government of Lord Aberdeen. He was succeeded by his grandson, Francis Stonor, 4th Baron Camoys, who served as a Lord-in-Waiting in the Liberal governments of William Gladstone and Lord Rosebery. The title is currently held by his great-grandson, Thomas Stonor, 7th Baron Camoys, who succeeded his father in 1976. He served as Lord Chamberlain of the Household between 1998 and 2000.

The ancestral seat of the Stonor family is Stonor Park, Henley-on-Thames, Oxfordshire.

The heir apparent is the present holder's son, the Hon. Ralph William Stonor (b. 1974)