Baron Chandos is a title that has been created twice in the Peerage of England.

The first creation was in 1337 when Roger de Chandos was summoned to parliament. Most sources read that the title became extinct on his death, although others include a 2nd and 3rd Lord (his son and grandson) before the title went extinct. 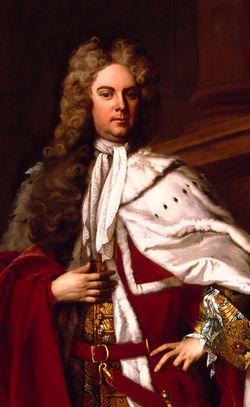 The second creation was in 1554 for John Brydges, who became "Baron Chandos, of Sudeley in the county of Gloucester". He was a former MP for Gloucestershire.

The three succeeding barons were all Members of Parliament and persons of some importance — see particularly Grey, 5th Baron, and his elder son George, 6th Baron. George had six daughters but no sons, and after the death of his brother William in 1676 the barony came to a kinsman, Sir James Brydges, Bart., who was English ambassador to Istanbul from 1680 to 1685.

The eighth baron's eldest son, James Brydges (1674–1744), succeeded his father as ninth Baron Chandos in 1714. In the same year, he was created Earl of Carnarvon (second creation) and Duke of Chandos in 1719. Subsidiary titles included Marquess of Carnarvon (1719) and Viscount Wilton (1714). All of these titles were in the Peerage of Great Britain.

The 1st Duke built an exceptionally grand country house called Cannons that, though it was parodied in his lifetime, was a seat of great learning and culture: Handel was the resident composer from 1717 until 1719. Brydges' Cannons was demolished after his death, to pay the debts he incurred in the South Sea Bubble disaster, and by his son. It was replaced by a modest villa built by William Hallett, and Canons is now occupied by North London Collegiate School whose Archives contain some information on the Duke, his second wife Cassandra Willoughby, and subsequent owners of Canons.

With the death of the third duke in 1789, the titles became extinct, and the barony became dormant. An attempt was made by Samuel Egerton Brydges to claim the barony, initially on behalf of his older brother Edward Tymewell Brydges and then on his own behalf. Litigation lasted from 1790 to 1803 before the claims were rejected, but Egerton Brydges continued to style himself per legem terrae Baron Chandos of Sudeley. It seems likely that not only was the claim groundless but that the evidence was forged.

The 3rd Duke's son-in-law, the 2nd Marquess of Buckingham, was created Duke of Buckingham and Chandos in 1822.