John Cornewaille, 1st Baron Fanhope and Milbroke, KG, also known as Sir John Cornwall, (c. 1364 — 11 December 1443) and Sir John Cornouayl, was an English nobleman, soldier and one of the most respected chivalric figures of his era.

Sir John was the son of Sir John Cornewaille, who had been in service to Francis II, Duke of Brittany, and his wife, a niece of the Duke of Brittany. He was born aboard a ship which was docked in Mount's Bay, in Cornwall, and baptized at Marazion, in England. He was a noted "Master of grammar" and had a great influence on the teaching English in schools. See also John Trevisa.

In 1400, Sir John married the widowed Elizabeth of Lancaster, Duchess of Exeter. Elizabeth was the daughter of John of Gaunt, the third surviving son of King Edward III of England, and the younger sister of Henry IV of England. She had previously been married to John Holland, 1st Duke of Exeter, with whom she had six children. John Holland was executed for conspiring to assassinate Henry IV during the Epiphany Rising. Sir John’s marriage to Elizabeth caused some scandal as he failed to ask Henry IV for permission to marry his sister Elizabeth, which resulted in Sir John being arrested. However the marriage is said to have been a happy and loving one.[1]

Sir John and Elizabeth had two children together, John Cornewaille, who was born c. 1403 and died in December 1421. Young John Cornwall was only seventeen when he was killed at the Siege of Meaux. He died next to his father, who witnessed his son’s head being blown off by a gun-stone. Sir John was deeply affected by witnessing the death of his son and heir, and vowed never to wage war on Christian princes.[2] Sir John and Elizabeth's daughter was Constance Cornwall who married John FitzAlan, 14th Earl of Arundel, and died in 1427. Neither of Sir John’s children had any children of their own. Additionally, Sir John fathered two illegitimate sons, John and Thomas, whom he recognized in his will. Elizabeth predeceased Sir John in death; she died on 24 November 1425 and was buried at Burford Church, Burford, Shropshire, England. 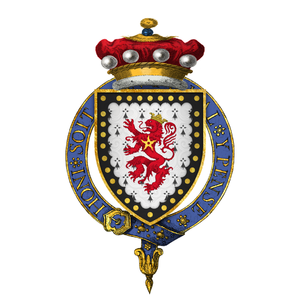 Sir John excelled in combat and was victorious in numerous tournaments, defeating many other knights in mêlée combat. During the Middle Ages, tournaments were regarded as the greatest test of a warrior's skill and valour; an idea reinforced by the prominent place that it occupied in popular Arthurian lore of the era.

As a soldier, Sir John had a long and distinguished career, serving in many campaigns. Early in his career, he is known to have served King Richard II in Scotland, fought for the Duke of Lancaster in Brittany, and fought for King Henry IV against Owain Glyndŵr during the Welsh Uprising. Sir John continued his military service for King Henry V and King Henry VI during the Hundred Years' War, most notably during in the battle of Agincourt, where he led the English vanguard on the march from Harfleur. He also served as a diplomat to the Armagnacs in France for his brother-in-law, Henry IV. Sir John held great favor through his relation and service to Henry IV, Henry V, and Henry VI.

Sir John amassed a considerable fortune and a great deal of land during his lifetime. He accomplished this through his marriage with Elizabeth, victories in tournaments, and the spoils of war. At the battle of Agincourt, Sir John captured Guillebert de Lannoy, and Louis, Count of Vendôme, whom he ransomed for large sums for money; and from 1429–1432, Henry VI granted custody of Charles, Duke of Orléans to Sir John. He profited greatly from the ransoms of prisoners, and used the spoils to build Ampthill Castle, and to buy Oyster Hill Manor from the Mayor of London, William Walworth. Sir John also became heavily involved in the mercantile community in London.

King Henry IV made Sir John Cornwall a Knight of the Garter in 1409. He was created Baron Fanhope and a member of the King’s Privy Council on 17 July 1433, and Baron Milbroke on 30 January 1442, by King Henry VI. Sir John’s titles became extinct on his death, as he left no legitimate issue.

Sir John died on 11 December 1443 at Ampthill Castle, in Bedfordshire, England. He was buried at Blackfriars Preachers, Ludgate, in Middlesex, England.

After his death, Ampthill Castle became royal property. Eventually, it was where Catherine of Aragon lived from 1531–1533, while Henry VIII was attempting to divorce her. Ampthill Castle is now in ruins, and the friary, along with Sir John's tomb, was destroyed during the Protestant Reformation. Upon his death, it was discovered that Sir John was owed £2,989 in Exchequer tallies by the crown (roughly £1.48 or $2.39 million in today’s money).