This article is about Baron Grey of Powis. For the title Baron Powis, see Earl of Powis.

Heirs to the Kingdom of Powys

Powys lies in mid-Wales, encompassing the three ancient counties of Montgomeryshire, Radnorshire and Breconshire. The Kingdom of Powys was a principality, that emerged during the Dark Ages following the Roman withdrawal from Britain. Powys Wenwynwyn was the southern portion of the former princely state of Powys which split following the death of Madog ap Maredudd of Powys in 1160. Owen de la Pole (i.e. of Welshpool) was the last Prince of Powys who surrendered the principality of Powys to Edward I at the Parliament of Shrewsbury in 1283, only to receive it back again from the king as a free Baron of England (Marcher Lord). Following the death of his son, Owen's daughter Hawise de la Pole became his heir. Hawise de la Pole married John Charleton, 1st Baron Cherleton, (1268–1353), and their male descendants owned the lordship until the 5th Baron Cherleton died in 1422. 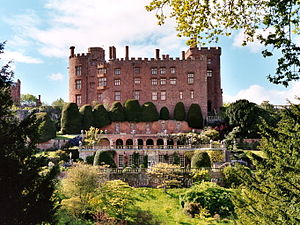 Powis Castle, located in Powys, near the town of Welshpool was originally built c. 1200 as a fortress of the Welsh Princes of Powys. It is the residence of the Earl of Powis, known for its extensive, attractive gardens. Photo taken by Alexander Forst-Rakoczy

Edward, the last Charleton to hold a title of Powis, died in 1422 leaving the title in abeyance.[2]

For a time, the heirs of both Joan and Joyce claimed the title of Powys. John Tiptoft, Joyce's son, was called baron Tiptoft and Powys in his creation to be Earl of Worcester. Joan's great grandson, John Grey was summoned to Parliament as Baron Grey de Powys.[4]

The Greys and Tiptofts divided not only the estates but also Powis Castle near Welshpool, Wales. In 1540 John Leland (died 1552), English poet and antiquary, noted that he found at Castel Coch (English: Red Castle) "two Lords Marchers" castles within one wall. At that time the part of John Sutton, 3rd Baron Dudley, great-grandson of Joyce Tiptoft, was almost in ruin, that of Lord Grey, grandson of Joan the elder sister was "metely good". The outer ward had been the share of the Tiptofts and inner ward that of the Greys.[4][8][9]

Lord Dudley sold the Tiptoft/Dudley share of Powis Castle to his nephew the 3rd and last Baron Grey of Powis, son of his sister Margaret, probably before 1538.[10]

Since neither John, Henry nor Richard were called to Parliament as Baron Grey of Powis, rather, referred to as Lord of Powis, they were not made Barons of Powis.[2] 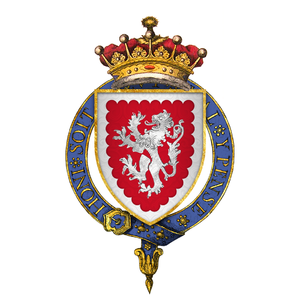 Arms of Grey's, Earls of Tankerville and Barons of Powis: Gules, a lion rampant and a border engrailed, both argent.

The next three generations of Powis Greys were called to Parliament and received title of Baron of Powis:[2]

John Grey, 2nd Baron Grey of Powis (1485–1504) was son of John and Lady Anne Herbert Grey. John married Margaret, daughter of Edward Sutton, 2nd Baron Dudley. John died in 1504 at the age of nineteen. His son and heir, Edward, was a year old.[5]

Edward Grey, 3rd Baron Grey of Powis (died 1551[5] or 1559 [15]). Edward traveled with the Duke of Suffolk to France, including the taking of Bray and other places from the French.[16] In 1525 Edward married Anne Brandon, Baroness Grey of Powys, daughter and co-heir of Charles Brandon, 1st Duke of Suffolk with whom he had no issue.[17] The marriage was not successful and in 1537 Anne left Edward for her lover, Randal Haworth[18] (whom she later married). By the time Anne took Randal as her lover, Edward had already taken a mistress, Jane Orwell [Orrell] by whom he had illegitimate children, and upon whom he would later entail the greater part of his estates comprising the barony of Powys.[16] Anne's father, with the assistance of Thomas Cromwell, forced Grey to support her, and succeeded in obtaining for her an annuity of £100. He also asked Cromwell to help discipline Anne so that she would "live after such an honest sort as shall be to her honor and mine".[19] In 1540, Grey petitioned the Privy Council to punish Anne for adultery, and also accused Anne and Haworth of conspiring to murder him. No action was taken against Anne, and she remained with her lover; however, this scandalous arrangement caused her to be excluded from Charles Brandon's will, which contained generous bequests to her two half-sisters, Frances and Eleanor.[19]

In 1551 Edward Grey died without lawful issue and the barony went into abeyance. He left six illegitimate children by Jane Orwell [Orrell]: Edward, Walter, Andrew, Thomas, Jane, and Cecily or Anne. According to Edward's will dated 11 June 1544, Edward left to his issue:

His property and titles he left to his children in the following manner:

In 1568 Edward Grey of London, son of 3rd Baron Grey of Powis, came of age and conveyed the manors of Plas Y Dynas and Trewern in Montgomeryshire to Edward Kynaston, and later the manor of Pontesbury to William Leighton.[5] In 1587 Edward sold the lordship and castle of Powys to his kinsman Sir Edward Herbert, the second son of William Herbert, 1st Earl of Pembroke (1501–1570). Edward Herbert's son, William Herbert became the 1st Baron Herbert of Powis. The Herberts rebuilt Powis Castle into its current state of splendor.[4][5]