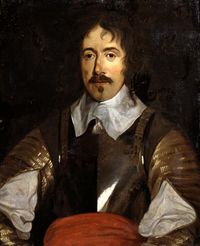 Baron Holles, of Ifield in the County of Sussex, was a title in the Peerage of England. It was created on 20 April 1661 for the Honourable Denzil Holles, second son of John Holles, 1st Earl of Clare.[1] He was succeeded by his son, the second Baron. He had already been created a Baronet, of Winterbourne in the County of Dorset, in the Baronetage of England in 1660. The titles became extinct on the death of his son, the third Baron and second Baronet, in c. 1692.