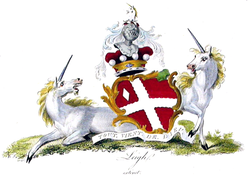 The coat of arms of the Barons Leigh
(of the first creation).

Baron Leigh has been created twice as an hereditary title, once in the Peerage of England and once in the Peerage of the United Kingdom. The first creation came in the Peerage of England 1643 when Sir Thomas Leigh, 2nd Baronet, was created Baron Leigh, of Stoneleigh in the County of Warwick. The Leigh Baronetcy, of Stoneleigh in the County of Warwick, had been created in 1611 for his grandfather and namesake Thomas Leigh.[1] The latter was the second son of Sir Thomas Leigh (d. 1571), Lord Mayor of London in 1558, whose third son Sir William Leigh was the grandfather of Francis Leigh, 1st Earl of Chichester. The titles became extinct on the death of the fifth Baron Leigh in 1786.

The barony was revived in 1839 when the poet Chandos Leigh was created Baron Leigh, of Stoneleigh in the County of Warwick, in the Peerage of the United Kingdom. He was a descendant of Rowland Leigh, eldest son of the aforementioned Sir Thomas Leigh (d. 1571), himself of a cadet branch of the ancient Leighs of West Hall, High Legh.[2] Both Lord Leigh's son, the second Baron, and grandson, the third Baron, served as Lord Lieutenant of Warwickshire. The third Baron was succeeded by his nephew, the fourth Baron. As of 2010[update] the title is held by the latter's grandson, the sixth Baron, who succeeded his father in 2003.

The Honourable Sir Edward Chandos Leigh, second son of the first Baron, was a cricketer and barrister. The Honourable and Very Reverend James Wentworth Leigh, third son of the first Baron, was Dean of Hereford.[3] The Honourable Gilbert Leigh, eldest son and heir of the second Baron, who sat as Member of Parliament for Warwickshire South predeceased his father. Theophilus Leigh, who belonged to a junior branch of the family, married Lady Mary Brydges, sister of James Brydges, 1st Duke of Chandos, and was the father of Thomas Leigh (died 1764): Thomas in turn was the father of Cassandra Leigh, mother of Jane Austen.

The family seat is Stoneleigh Abbey, Kenilworth, Warwickshire. The records of the Leigh family of Stoneleigh are held in the archives of the Shakespeare Birthplace Trust.