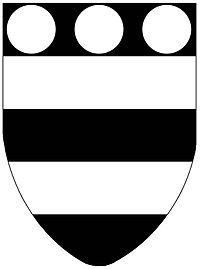 Baron Hungerford is a title in the Peerage of England. It was created on 7 January 1426 for Walter Hungerford, who was summoned to parliament, had been Member of Parliament, Speaker of the House and invested as Knight of the Order of the Garter before and was made Lord High Treasurer one year before he became a peer. The second baron was also created Baron de Moleyns on 13 January 1445 by writ of summons; both titles then merged. The third baron was attainted and the peerage forfeit in 1461. This attainder was reversed in 1485 for the then 4th baroness of Hungerford, and so it came into the Hastings family of Earls of Huntingdon until 1789, when it came into the Rawdon(-Hastings) family of the Marquesses of Hastings until 1868 when it fell into abeyance. This abeyance was terminated three years later for a member of the Abney-Hastings family and an Earl of Loudoun. In 1920 it again fell into abeyance, which was terminated one year later for the Philipps family of the Viscounts of St Davids where it has remained since.

Another Barony of Hungerford with the distinction de Heytesbury was created in the Peerage of England on 8 June 1526 for another Walter Hungerford, who was summoned to parliament. He was attainted in 1541 and the peerage forfeited. This attainder has not been reversed since.