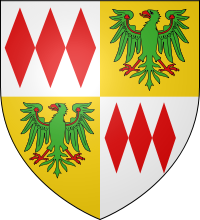 The titles Baron Montacute or Baron Montagu were created three and two times respectively in the Peerage of England. The family name was Latinised to de Monte Acuto, meaning "from the sharp mountain"; the French form is an ancient spelling of mont aigu, with identical meaning,[2] whence possibly came the imagery of the fusils in the family's arms.

The first creation was for Simon de Montagu (d.1316) who was summoned to parliament on 29 December 1299. The third baron was created Earl of Salisbury in 1337. On the death of the third earl, both titles became forfeit under attainder in 1400. Both titles were restored for the heir Thomas Montagu, 4th Earl of Salisbury in 1421. On his death, the barony was inherited by his daughter Alice, who was married to Richard Neville. After the death of their eldest son Richard Neville, the Kingmaker, the barony either fell into abeyance or became dormant in 1471. In 1485, it was restored to Edward Plantagenet, but he was attainted and the peerages forfeited again in 1499, when he died. In 1513, his sister Margaret was restored to the barony. When she was restored to the earldom of Salisbury in 1529, her son became the eleventh Baron Montacute, but he also was created Baron Montagu by writ of summons in 1529. Both baronies became forfeited at the attainder of the latter and his mother in 1539.

The second creation was for Edward Montagu, 1st Baron Montagu, son of William Montagu, 2nd Baron Montagu and Elizabeth Montfort. He was summoned to Parliament from 20 November 1348 to 20 November 1360 by writs directed Edwardo de Monte Acuto, 'whereby he is held to have become Lord Montagu'.[3][4] He died 14 July 1361. His son by his first marriage having predeceased him, his heir was his seven-week-old son by his second marriage, Edward, who survived him by only three months, dying on 4 October 1461,[5][4] at which time any barony created by writ fell into abeyance, according to modern doctrine, among the surviving daughters of his father.[5] In 1361 the only surviving daughter of Edward de Montagu's first marriage to Alice of Norfolk was Joan de Montagu, then aged 12. She married William de Ufford, 2nd Earl of Suffolk, by whom she had four sons and a daughter,[5][4] none of whom survived her. At her death before 27 June 1376, 'according to modern doctrine the barony emerged from abeyance, and vested in her half-sister, Audrey de Montagu, the only surviving daughter of her father's second marriage'.[5]

The third creation was for John de Montacute who was summoned to parliament on 15 February 1357. His successor (his son?) succeeded in the earldom of Salisbury in 1397 with which title it then merged. Either it had the same fate as the first creation, or it has stayed forfeited since 1400, 1471 or 1499.

The first creation was for John Neville, younger brother of the Kingmaker. John Neville was summoned to parliament on 23 May 1461. He was created Marquess of Montagu in 1470. At his death in 1471, both titles became forfeit under his attainder.

As mentioned above, there was a fifth creation in 1529 that became forfeit under attainder.

For titles in the name of Montagu conferred on the later family of Montagu (previously Ladde) and their descendants, see:

Title conferred on the family of Browne :