From Infogalactic: the planetary knowledge core
Jump to: navigation, search
File:LawleyArms.PNG
Arms of Lawley: Argent, a cross formée extended to the extremes of the shield chequy or and sable[1] 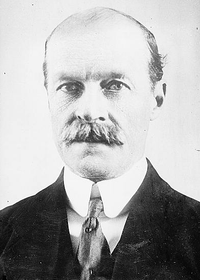 Baron Wenlock is a title that has been created three times, once in the Peerage of England and twice in the Peerage of the United Kingdom. The first creation came in 1461 when the soldier Sir John Wenlock was summoned to Parliament as Lord Wenlock. However, he was childless and on his death in 1471 the title became extinct.

The second creation came in the Peerage of the United Kingdom in 1831 when Sir Robert Lawley, 6th Baronet, was created Baron Wenlock, of Wenlock in the County of Shropshire. He had earlier represented Newcastle-under-Lyme in the House of Commons. However, he was childless and on his death in 1834 the barony became extinct. He was succeeded in the baronetcy by his younger brother, the seventh Baronet. He was a former Member of Parliament for Warwickshire.

On his death the title passed to his younger brother, the eighth Baronet. In 1820 he had inherited the Escrick estate in Yorkshire from his uncle Richard Thompson and had assumed by Royal license the surname of Thompson in lieu of Lawley. He also represented Wenlock and the East Riding of Yorkshire. In 1839, twelve years before he succeeded in the baronetcy, the barony created for his elder brother was revived when he was made Baron Wenlock, of Wenlock in the County of Shropshire. His son, the second Baron, was Member of Parliament for Pontefract and served as Lord Lieutenant of the East Riding of Yorkshire.

His eldest son, the third Baron, notably served as Governor of Madras. His fourth brother, the sixth Baron (who succeeded his elder brother in 1931, who in his turn had succeeded his elder brother in 1918), served as Governor of Western Australia, of the Transvaal Republic and of Madras. His only son and heir Hon. Richard Edward Lawley died at an early age and on Lord Wenlock's death in 1932 both titles became extinct.

The Lawley Baronetcy, of Spoonhill in the County of Shropshire, was created in the Baronetage of England on 16 August 1641 for Thomas Lawley, who represented Wenlock in Parliament. His son, the second Baronet, was Member of Parliament for both Wenlock and Shropshire. His eldest son, the third Baronet, also represented Wenlock in the House of Commons. The fifth Baronet was Member of Parliament for Warwickshire. He was succeeded by his eldest son, the sixth Baronet, who was elevated to the peerage as Baron Wenlock in 1831. The fourth and sixth Baronets served as High Sheriff of Staffordshire in 1743 and 1797 respectively. The seventh Baronet was High Sheriff of Warwickshire in 1839.