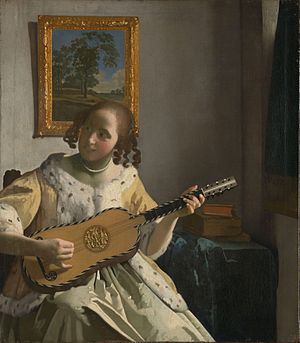 The Baroque guitar (c. 1600–1750) is a string instrument with five courses of gut strings and moveable gut frets. The first (highest pitched) course sometimes used only a single string.[1] 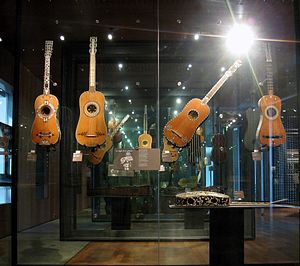 The Baroque guitar replaced the Renaissance lute as the most common instrument found in the home.[2][3] The earliest attestation of a five-stringed guitar comes from the mid-sixteenth-century Spanish book Declaracion de Instrumentos Musicales by Juan Bermudo, published in 1555.[4] The first treatise published for the Baroque guitar was Guitarra Española de cinco ordenes (The Five-course Spanish Guitar), c. 1590, by Juan Carlos Amat.[5][6] The baroque guitar in contemporary ensembles took on the role of a basso continuo instrument and players would be expected to improvise a chordal accompaniment with another basso continuo instrument playing the bass line.[7] Intimately tied to the development of the Baroque guitar is the alfabeto system of notation.

Three different ways of tuning the guitar are well documented in seventeenth-century sources as set out in the following table. This includes the names of composers who are associated with each method. Very few sources clearly indicate that one method of stringing rather than another should be used and it may have been up to the player to decide what was appropriate. 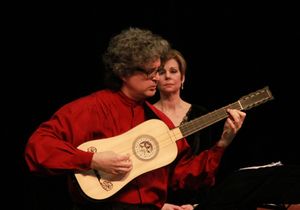