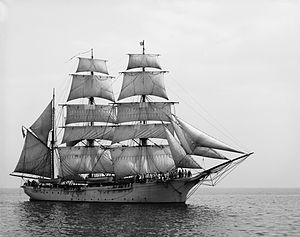 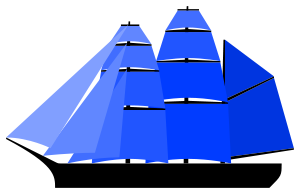 A barque, barc, or bark is a type of sailing vessel with three or more masts having the fore- and mainmasts rigged square and only the mizzen (the aftermost mast) rigged fore-and-aft.

The word barque entered English via French, which in turn came from the Latin barca by way of Occitan, Spanish or Italian. The Latin barca may stem from Celtic "barc" (per Thurneysen) or Greek "baris" (per Diez), a term for an Egyptian boat. The Oxford English Dictionary considers the latter improbable.[1]

The word barc appears to have come from Celtic languages. The form adopted by English, perhaps from Irish, was bark, while that adopted by Latin as barca very early, which gave rise to the French barge and barque. In Latin, Spanish and Italian the term barca refers to a small boat, not a full-size ship. French influence in England led to the use in English of both words, although their meanings now are not the same. Well before the 19th century a barge had become interpreted as a small vessel of coastal or inland waters. Somewhat later, a bark became a sailing vessel of a distinctive rig as detailed below. In Britain, by the mid-19th century, the spelling had taken on the French form of barque. Francis Bacon used this form of the word as early as 1605.[citation needed] Throughout the period of sail, the word was used also as a shortening of the barca-longa of the Mediterranean Sea.

The usual convention is that spelling barque refers to a ship and bark to tree hide, to distinguish the homophones.[citation needed]

"Barcarole" in music shares the same etymology, being originally a folk song sung by Venetian gondolier and derived from barca - boat in Italian. 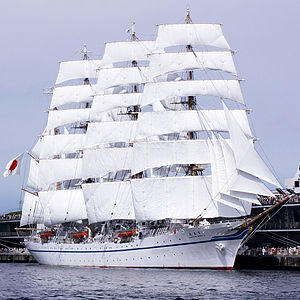 In the 18th century, the British Royal Navy used the term bark for a nondescript vessel that did not fit any of its usual categories. Thus, when the British Admiralty purchased a collier for use by James Cook in his journey of exploration, she was registered as HM Bark Endeavour to distinguish her from another Endeavour, a sloop already in service at the time. She happened to be a ship-rigged sailing vessel with a plain bluff bow and a full stern with windows.

William Falconer's Dictionary of the Marine defined "bark", as "A general name given to small ships: it is however peculiarly appropriated by seamen to those which carry three masts without a mizzen topsail. Our Northern Mariners, who are trained in the coal-trade, apply this distinction to a broad-sterned ship, which carries no ornamental figure on the stem or prow."[2]

The UK's National Archives states[citation needed] that there is a paper document surviving from the 16th century in the Cheshire and Chester Archives and Local Studies Service, which notes the names of Robert Ratclyfe, owner of the bark "Sunday" and 10 Mariners appointed to serve under Rt. Hon. the Earl of Sussex, Lord Deputy of Ireland. 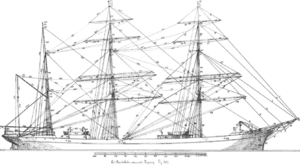 Rigging of a three-masted barque

By the end of the 18th century,[citation needed] the term barque (sometimes, particularly in the USA, spelled bark) came to refer to any vessel with a particular type of sail-plan. This comprises three (or more) masts, fore-and-aft sails on the aftermost mast and square sails on all other masts. Barques were the workhorse of the Golden Age of Sail in the mid-19th century as they attained passages that nearly matched full rigged ships but could operate with smaller crews.

The advantage of these rigs was that they needed smaller (therefore cheaper) crews than a comparable full-rigged ship or brig-rigged vessel as there were fewer of the labour-intensive square sails, and the rig itself is cheaper.[citation needed] Conversely, the ship rig tended to be retained for training vessels where the larger the crew, the more seamen were trained.

Another advantage is that a barque can outperform a schooner or barkentine, and is both easier to handle and better at going to windward than a full-rigged ship. While a full-rigged ship is the best runner available, and while fore-and-aft rigged vessels are the best at going to windward, the barque is often the best compromise,[citation needed] and combines the best elements of these two.

Most ocean-going windjammers were four-masted barques, since the four-masted barque is considered the most efficient rig available because of its ease of handling, small need of manpower, good running capabilities, and good capabilities of rising toward wind. Usually the main mast was the tallest; that of Moshulu extends to 58 m off the deck. The four-masted barque can be handled with a surprisingly small crew—at minimum, ten—and while the usual crew was around thirty, almost half of them could be apprentices.

A well-preserved example of a commercial barque is the Pommern, the only windjammer in original condition. Its home is in Mariehamn outside the Åland maritime museum. The wooden barque Sigyn, built in Göteborg 1887, is now a museum ship in Turku. The wooden whaling barque Charles W. Morgan, launched 1841, taken out of service 1921,[3] is now a museum ship at Mystic Seaport[4] in Connecticut. The Charles W. Morgan has recently been refit and is currently (Summer, 2014) sailing the New England coast. The United States Coast Guard still has an operational barque, built in Germany in 1936 and captured as a war prize, the USCGC Eagle, which the United States Coast Guard Academy in New London, Connecticut uses as a training vessel. The Sydney Heritage Fleet restored an iron-hulled three-masted barque, the James Craig, originally constructed as "Clan Macleod" in 1874 and sailing at sea fortnightly. The oldest active sailing vessel in the world, the Star of India, was built in 1863 as a full-rigged ship, then converted into a barque in 1901.

It was this type of ship that inspired the French composer Maurice Ravel to write his famous piece, Une Barque sur l'ocean, originally composed for piano, in 1905, then orchestrated in 1906.

In Ancient Egypt barques, referred to using the French word as Egyptian hieroglyphs were first translated by the Frenchman Jean-François Champollion, were a type of boat used from Egypt's earliest recorded times and are depicted in many drawings, paintings, and reliefs that document the culture. Transportation to the afterlife was believed to be accomplished by way of barques as well, and the image is used in many of the religious murals and carvings in temples and tombs.

The most important Egyptian barque carried the dead pharaoh to become a deity. Great care was taken to provide a beautiful barque to the pharaoh for this journey, and models of the boats were placed in their tombs. Many models of these boats, that range from tiny to huge in size, have been found. Wealthy and royal members of the culture also provided barques for their final journey. The type of vessel depicted in Egyptian images remains quite similar throughout the thousands of years the culture persisted.

Barques were important religious artifacts and since the deities were thought to travel in this fashion in the sky—the Milky Way was seen as a great waterway that was as important as the Nile on Earth—cult statues of the deities traveled by boats on water and ritual boats were carried about by the priests during festival ceremonies. Temples included barque shrines, sometimes more than one in a temple, in which the sacred barques rested when a procession was not in progress.[5][6] In these stations the boats would be watched over and cared for by the priests. 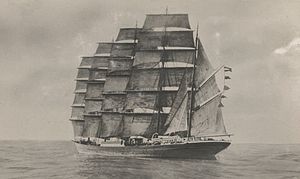