From Infogalactic: the planetary knowledge core
Jump to: navigation, search
This article is about the ship. For the fictional character in Mervyn Peake's Gormenghast novels, see Barquentine (Gormenghast).

A barquentine or schooner barque (alternatively "barkentine" or "schooner bark") is a sailing vessel with three or more masts; with a square rigged foremast and fore-and-aft rigged main, mizzen and any other masts. 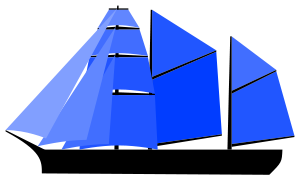 Today, barquentines are popular with modern tall ship and sail training operators as their suite of mainly fore-and-aft sails can be operated with ease and efficiency, but the single mast of square sails offers long distance speed and dramatic appearance in port.

The term "barquentine" is 17th century in origin, formed from "barque" in imitation of "brigantine", a two-masted vessel square-rigged only on the forward mast, and apparently formed from the word brig.[Note 1][2] 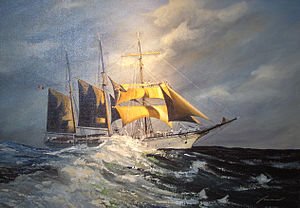 Painting of the Mercator by Yasmina