Barreiros was a Spanish manufacturer of engines, trucks, buses, tractors and automobiles.

The company was founded in 1954 as Barreiros Diesel S.A. by Eduardo Barreiros and based in Madrid. Established initially as a producer of diesel engines, at Ourense the company then expanded to make commercial vehicles, reaching licensing agreements with French Berliet (truck cabs), British AEC (buses and coaches), and German Hanomag (agricultural tractors) and Vidal & Sohn Tempo-Werke GmbH (light vans and trucks), all of them driven by Barreiros's own engines. Additionally a pay-in-kind contract with Polish Star was active in the late 1950s, by which engineless Star chassis-cab trucks were exported to Spain, while Barreiros engines were sent to Poland; the whole resulted in Barreiros-engined Star tractors being sold in China (and Polish trucks in Spain).

Later on Barreiros branched out into the production of passenger cars by means of cooperation (and capital links) with the Chrysler Corporation. An agreement was reached with Chrysler in 1963 to build the Dodge Dart, allowing the company to enter the car market. Sold as the Barreiros Dart, it had modified front styling, a four-speed gearbox, and all-around disc brakes. During that time, the Spanish automobile market was strongly protected, making entering it effectively only possible by domestic manufacturing. As the 1960s progressed, the range was extended with some smaller models from Chrysler's French subsidiary, Simca. The Barreiros-made Simca 1000 was launched in 1966, and later the Simca 1200 joined the range (in fact the French Simca 1100, but with a bigger standard engine for the Spanish market). 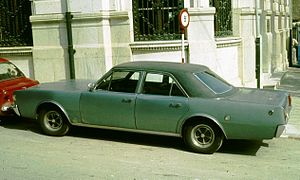 From 1965 to 1970, a Spanish version of the Dodge Dart based on the original from the United States was manufactured in the Barreiros Villaverde factory in Madrid, using the same 111-in (2,819 mm) wheelbase, but with different sheet metal; the Dodge 3700 (commonly known as the Dart) was produced from 1971 to 1978.[1][2] A total of 17,589 units were manufactured of both models in Spain, they were produced as a knock-down kit imported from Argentina due to the protectionist Spanish regulations of those years.[3][4]

The Dart and the 3700 were the biggest national production car available in Spain during all production years. It was an expensive luxury car with very low fuel economy by Spanish standards.

The GL designation was a luxury model,[5] while the GT was the sporty version.[6]

All gasoline Dodges had the biggest engine ever mounted into a mass-production car in Spain, the 225 cu in (3.7 l) Chrysler Slant 6 engine. The "3700" number is a reference to the 3.7 litres of displacement. No other six-cylinder engine car has been produced in as big numbers in Spain.

A diesel Dart (named "Barreiros Diesel") was also produced.[7] These models were very basic and very slow, and used the round tail lights from the first-generation Simca 1000.[8]

Production of the Spanish Dodge Dart/Dodge 3700 stopped in 1977. Peugeot bought the Villaverde factory, as Chrysler was divesting European operations in Spain, France, and the United Kingdom.

Spanish Dodges were popular with members of the Spanish government during the 1960s and 1970s. Admiral Luis Carrero Blanco was killed on 20 December 1973 while travelling in his Dodge 3700 GT.[1][10] On 12 June 1975, Fernando Herrero Tejedor, a Minister Secretary General of the Movimiento Nacional and the politician mentoring Adolfo Suárez, died in a car accident while travelling in his official Dodge 3700 in the municipality of Adanero.[11][12]

In 1969, Chrysler Europe took complete control of the company.

In 1975, Barreiros became for the first time the sole source for a Chrysler Europe model - the production lines of the slow-selling Chrysler 180 series were moved to Madrid from Simca's factory in Poissy.[13] Unlike in most other European countries, the Chrysler 180 became relatively popular in Spain. Barreiros also continued to assemble other Chrysler Europe models for the domestic market, including Simca 1307 (renamed Chrysler 150 in Spain to be more in line with the popular 180) and Simca Horizon.

On the truck and bus side, a full range of light, medium and heavy models was offered, still marketed as Barreiros in Spain and as Dodge or Fargo elsewhere, but eventually the Dodge badge prevailed in all markets.

In PSA and Renault hands

In 1978, Chrysler Europe was sold to PSA, which subsequently renamed all former Chrysler/Simca models to Talbot (so, for example, the Chrysler 150 became Talbot 150). Barreiros continued to assemble Talbot car models launched under the PSA reign, such as Talbot Solara or Talbot Samba.

The truck and bus division was sold to Renault, also called RVI, and for a short time, the old former Barreiros models, mostly trucks, were sold badged as Renaults / Spanish Renault.

Spanish Prime Minister Admiral Luis Carrero Blanco, under Generalissimo Francisco Franco, was assassinated riding in an armoured Dodge 3700 GT in 1973 by an 80 kg bomb planted by the Basque E.T.A. The car, whose armoured structure resisted the 80 kg dynamite bomb, was blown over a building and fell in an interior garden. Carrero Blanco and his driver died. The car is now on display at the Spanish Army museum in Toledo.[14] 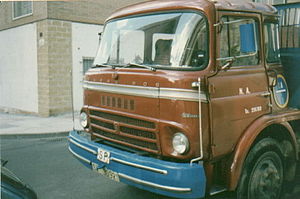