Sir Barrington Windsor Cunliffe CBE FBA FSA (born 10 December 1939), known as Barry Cunliffe, is a British archaeologist and academic. He was Professor of European Archaeology at the University of Oxford from 1972 to 2007. Since 2007, he has been an Emeritus Professor. 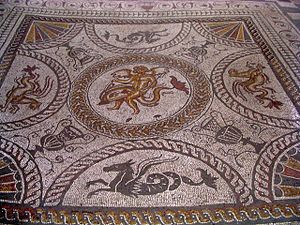 The dolphin mosaic found by Cunliffe's team at Fishbourne

Cunliffe's decision to become an archaeologist was sparked at the age of nine by the discovery of Roman remains on his uncle's farm in Somerset.[1] After studying at Portsmouth Northern Grammar School (now the Mayfield School) and reading archaeology and anthropology at the University of Cambridge, he became a lecturer at the University of Bristol in 1963. Fascinated by the Roman remains in nearby Bath he embarked on a programme of excavation and publication.

In 1966 he became an unusually young professor when he took the chair at the newly founded Department of Archaeology at the University of Southampton. There he became involved in the excavation (1961–68) of the Fishbourne Roman Palace in Sussex. Another site in southern England led him away from the Roman period. He began a long series of summer excavations (1969–88) of the Iron Age hill fort at Danebury, Hampshire and was subsequently involved in the Danebury Environs Programme (1989–95). His interest in Iron Age Britain and Europe generated a number of publications and he became an acknowledged authority on the Celts.

Other sites he has worked on include Hengistbury Head in Dorset, Mount Batten in Devon, Le Câtel in Jersey, and Le Yaudet in Brittany, reflecting his interest in the communities of Atlantic Europe during the Iron Age. In his later works he sets out the thesis that Celtic culture originated along the length of the Atlantic seaboard in the Bronze Age before being taken inland, which stands in contrast to the more generally accepted view that Celtic origins lie with the Hallstatt culture of the Alps. One of his most recent projects has been in the Najerilla valley, La Rioja, Spain, which straddles "the interface between the Celtiberian heartland of central Iberia and the Atlantic zone of the Bay of Biscay".[2]

Cunliffe lives with his wife in Oxford.

Cunliffe inspired the name for the character "Currant Bunliffe", an archaeologist in David Macaulay's 1979 book, Motel of the Mysteries.