From Infogalactic: the planetary knowledge core
Jump to: navigation, search
This article is about the baseball player. For the Olympic hoaxer, see Barry Larkin (Olympics).

Barry Louis Larkin (born April 28, 1964) is a retired Major League Baseball (MLB) player. Larkin played shortstop for the Cincinnati Reds from 1986 to 2004 and was one of the pivotal players on the 1990 Reds' World Series championship team. Larkin was elected to the National Baseball Hall of Fame in January 2012 and was inducted on July 22, 2012.[1]

Born and raised in Cincinnati, Larkin attended the University of Michigan, where he played college baseball. He briefly played in the minor leagues before making his MLB debut in 1986. He quickly won the starting shortstop role for the Reds and enjoyed a long run of strong seasons with the team. Larkin struggled with a string of injuries between 1997 and 2003, limiting his playing time in several seasons.

Larkin retired after the 2004 season and worked in a front office position for the Washington Nationals for several years until he joined ESPN as a baseball analyst. He served as a coach for the American team in the 2009 World Baseball Classic and managed the Brazilian national team in the qualifiers for the same event in 2013.

Larkin is considered one of the top players of his era, winning nine Silver Slugger awards and three Gold Glove awards. He was selected to the Major League All-Star Game twelve times, and was elected the 1995 National League Most Valuable Player.[2]

Larkin accepted a football scholarship to the University of Michigan to play for legendary coach Bo Schembechler, but during his freshman year he decided to play baseball exclusively. He was a two-time All-American and led the Wolverines to berths in two College World Series, in 1983 and 1984 (the last time Michigan reached the finals). Larkin was also named Big Ten Player of the Year in 1984 and 1985.[4] Larkin's number 16 was retired by the school on May 1, 2010.[1]

Larkin played with the Vermont Reds on their team that won the 1985 Eastern League Championship and in 1986 was the Rookie of the Year and AAA Player of the Year with the Denver Zephyrs.[5] In all, he played only 177 minor league games in his professional career.[6]

After arriving in the majors, Larkin battled fellow prospect Kurt Stillwell for the starting shortstop spot before establishing himself as the starter in 1987. In 1988 Larkin led all major leaguers by striking out only 24 times in 588 at bats.[5] Larkin batted .353 in the 1990 World Series to help lead the Reds to a four-game sweep of the Oakland Athletics.[5] On June 27–28, 1991, Larkin became the first shortstop ever to hit five home runs in the span of two consecutive games. He earned his fourth consecutive All-Star Game selection that season.[3]

After the 1991 season, Larkin questioned whether the Reds had a commitment to winning. He said he was likely to leave the team when his contract expired the next year, but he was encouraged when the Reds acquired pitchers Tim Belcher and Greg Swindell in the offeseason. In January 1992, the Reds signed him to a five-year, $25.6 million contract. At that time, only four players had larger contracts and Larkin was the highest-paid shortstop.[7] Larkin was not selected as an All-Star in 1992, but he won his fifth consecutive Silver Slugger Award.[3]

In 1993 he won the Roberto Clemente Award,[5] which recognizes players who display sportsmanship, community service and on-field ability.[8] In 1995, Larkin was sixth in batting (.319) and second in stolen bases (51) to win the National League's MVP award, the first by a shortstop since Maury Wills in 1962. He led the Reds to a central division title and the 1995 National League Championship Series, where he batted .389 during the series loss to the eventual champion Atlanta Braves.[5] In 1996, Larkin hit a career-high 33 home runs and stole 36 bases, becoming the first shortstop in Major League history to join the 30-30 club; he arguably had a better season in 1996 than he had in his MVP year of 1995.

Larkin was named the Reds' captain before the 1997 season, making him the first player to hold the honor since Dave Concepción's retirement. Beginning that season, Larkin suffered a series of injuries throughout the last few years of his career. He missed 55 games that year due to injuries to his calf and his Achilles tendon.[9] About three weeks before the opening of the 1998 season, Larkin decided to undergo neck surgery for a perforated disk. He was not in severe pain, but he was unable to lift his arm enough to play his defensive position.[10]

On September 27, 1998 Barry, his brother Stephen Larkin, second baseman Bret Boone, and third baseman Aaron Boone all played the infield at the same time for the last game of the 1998 season, making it the first time in MLB history that two sets of siblings were on the field at the same time.[citation needed]

In 1999, Larkin was nearly traded to the Los Angeles Dodgers. He later said that he was approached by a Los Angeles clubhouse attendant, who gave him a Dodgers jersey with his name on it. The jersey had been prepared as trade negotiations advanced so that the teams could be prepared for a trade-related press conference.[11]

In July 2000, Larkin blocked a trade to the New York Mets to remain with the Reds. The trade would have sent three players - top minor league outfielder Alex Escobar, pitcher Eric Cammack and pitcher Jason Saenz - from the Mets to the Reds in exchange for Larkin. Larkin said that he would have gone to New York, as he enjoyed playing there, but the Mets did not want to sign him to a multi-year contract. The Reds signed him to a three-year contract extension worth $27 million.[12] In the 2000 season, Larkin missed 59 games after he injured his finger twice and he suffered a knee sprain.[13] He underwent finger surgery in April and knee surgery in September.[14][15]

Larkin struggled with a groin injury in 2001, prompting criticism of his play. Broadcaster Joe Nuxhall said on air that Larkin had "lost it".[16] By August, the injury had limited Larkin to 45 games. He underwent season-ending surgery for a hernia that had been diagnosed during an evaluation of the groin injury.[16] During the 2002 season, Larkin played in 145 games but hit for the lowest batting average (.245) since his first full year in the major leagues. Though he did not miss many games, Larkin dealt with injuries to his rib cage, hamstring, shoulder, neck and toe.[17]

In 2003, Larkin had spent two stints on the disabled list with calf injuries by late May.[17] During strained contract negotiations with Reds COO John Allen in late 2003, Larkin almost left the team. Larkin and the Reds agreed to a one-year contract for 2004. Larkin called off a planned retirement ceremony scheduled for October 2, 2004, because he was not sure if he would retire. In that season, Larkin hit for a .289 batting average. He announced his retirement in February 2005.[18]

Commenting on Larkin's retirement after such a strong season, sports columnist Terence Moore drew a comparison to the retirement of Ted Williams. He wrote, "Barry Larkin wasn't quite Williams at the end, but he was in the vicinity when it comes to the big picture... After years of injuries, he showed what a healthy Larkin still could do, but he also showed that he preferred to leave the game more like Williams than just about anybody else you can name in baseball history."[19]

After his retirement, Larkin was hired as a special assistant to the general manager in the Washington Nationals organization. With the Nationals, he worked under former Reds general manager Jim Bowden. Larkin had hoped to work for the Reds, but USA Today reported that his 2003 contract disagreement with Allen eliminated that opportunity.[18] In 2008, he signed with the MLB Network as a studio analyst.[21]

He was the bench coach for the United States at the 2009 World Baseball Classic and managed the United States' second-round game against Puerto Rico when U.S. manager Davey Johnson left to attend his stepson's wedding.[22] On July 20, 2008, the Cincinnati Reds Hall of Fame and Museum inducted Larkin, César Gerónimo, August "Garry" Herrmann, and Joey Jay. The induction was held at the Duke Energy Center in downtown Cincinnati.[23] On Tuesday, March 24, 2009, the College Baseball Foundation announced the names of the ten players and coaches comprising the 2009 National College Baseball Hall of Fame Induction Class, which included Barry Larkin. 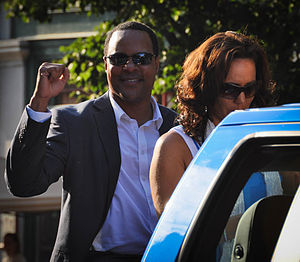 Larkin at the 2013 Baseball Hall of Fame induction parade

In 2011, Larkin left Washington for ESPN to serve as a Baseball Tonight analyst.[24] Larkin received great applause from Reds fans when he helped host Baseball Tonight's on-the-road coverage of Sunday Night Baseball at GABP on July 24, 2011. Crowd chants of "Barry Larkin" and "Hall of Fame" often caused the anchors to have to talk very loud to be heard. Larkin was coincidentally in Cincinnati for Baseball Tonight on the day of the 2011 Hall of Fame induction ceremonies.

He was invited by the Brazilian Baseball Federation to manage their national team in the qualifiers for the 2013 World Baseball Classic. Brazil beat host country Panama in Brazil's first time to qualify for the event. They were originally scheduled to play in Puerto Rico, but because of the huge Japanese baseball influence in Brazil, they played in Japan. The team played Cuba and China besides the home country. [28][29] The team went winless in its WBC debut and was eliminated after the first round.

Larkin built the Champions Sports Complex to use sports in the social, emotional, and educational development of youth. In 2008, Larkin released a charity wine called "Barry Larkin's Merlot", with 100% of its proceeds supporting Champions Sports Foundation.

In November 2013, Detroit Tigers general manager Dave Dombrowski confirmed that the organization had intended to interview Larkin for its open managerial position. Larkin declined the interview due the time commitment to the job. Brad Ausmus was named the new Tigers manager on November 3, 2013.[30]

In November 2014, the Tampa Bay Times reported that Larkin was among 10 candidates interviewed for the Tampa Bay Rays' managerial job.[31] Larkin was not among the team's three finalists, and the job ultimately went to Kevin Cash.[32] 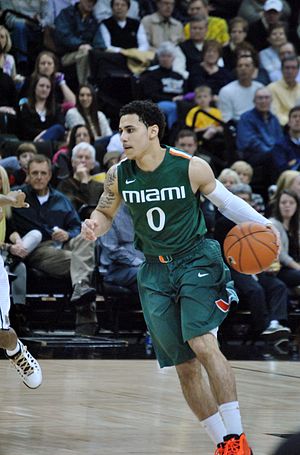 Larkin's brother, Stephen Larkin, was also a professional baseball player; he made it to the major leagues for one game with the Reds. Another brother, Byron Larkin, was a second-team All-American basketball player at Xavier University and is the color commentator on Xavier basketball radio broadcasts. Larkin's eldest brother, Mike, was a captain of the University of Notre Dame's football team in 1985.

Larkin and his wife Lisa have two daughters, Brielle D'Shea and Cymber, and a son, Shane. The family lives in Orlando, Florida. Shane played two seasons at the University of Miami before declaring himself eligible for the 2013 NBA Draft. Shane was subsequently traded to the Dallas Mavericks and made his NBA debut in November 2013. Larkin's daughters play lacrosse. Brielle D'Shea is named in honor of Shea Stadium, as Larkin enjoyed playing there.[33]