From Infogalactic: the planetary knowledge core
Jump to: navigation, search
For the judge, see Barry Sheen.

After a racing career stretching from 1968 to 1984 he retired from competition and relocated to Australia, working as a motorsport commentator and property developer.[1][3]

Sheene was born off the Gray's Inn Road,[4] London, the second child of parents Frank (resident engineer at the Royal College of Surgeons, himself a former competitive rider who retired in 1956 and an experienced motorcycle mechanic)[5][6][7] and Iris. He grew up in Queen Square, Holborn, London.[8] Before entering road racing Sheene found work as a messenger and delivery driver.[1]

Sheene first started to race in 1968, winning his first races at Brands Hatch riding father Frank's 125 cc and 250 cc Bultacos.[5] He improved to second behind Chas Mortimer in 1969 in the 125cc class on the Bultaco.

He became the British 125cc champion at age 20 in 1970, riding an ex-works 1967 Suzuki twin, previously ridden by Stuart Graham in the 1968 GPs and in selected 1969 events, that he purchased for £2,000!.[9] In 1971 still riding that RT67 Suzuki twin, he finished second in the 125 cc World Championship, probably missing the title due to injuries sustained in a well paid non championship race at Hengelo (Netherlands) and during the Race Of the Year at Mallory Park (compression fractures of three vertebrae and five broken ribs).[10]

His first Grand Prix win coming on that bike at Spa in Belgium, soon followed by a win on a 50 cc Van Veen Kreidler at Brno in Czechoslovakia, where he finished over two and a half minutes ahead.[2][11]

For 1972 Sheene was signed by Yamaha to ride a works Yamaha YZ635 for the 250 cc World Championship under the French importer Sonauto's banner. There was no Yamaha factory team at the time, but Sheene was one of six riders receiving support from the factory.[12] However, at the third round in Austria, after losing a sprint to the finish line to the Australian John Dodds for third place, he voiced his displeasure to team management about the performance of the bike. The next GP was the GP of Nations at Imola at the end of May, but Barry crashed in practice and broke his collarbone, preventing him from taking part in the race, and in the IOMTT (which was the 5th GP of 1972) as well.[13] Unfortunately for him, the next seven races of the world championship were all taking place in close succession in June and July and Barry would not be fit to take part in them.

His works Yamaha YZ635 was then given as from the GP of Jugoslavia to the Finnish rider, Jarno Saarinen, already a Yamaha factory rider in the 350cc class, who went on to win four races and the 250cc World Championship that year.[14]

Once back to fitness, Barry would get factory Yamahas back for domestic races over the summer (Silverstone, Scarborough, Mallory Park) (probably Kanaya's machines as Saarinen was there too, and Rod Gould as well), and for the last GP of the season, at Montjuich in Spain on September 23, where he scored a fine third place in 250cc.[15]

Sheene was signed by Suzuki during the off season 1972–1973 and won the newly formed Formula 750 European championship for them in 1973.[16] As a works Suzuki rider Sheene had two contracts, with the World Championship events taking precedence over his Suzuki GB contract for home and International events, if any race dates clashed.[17]

For 1974 Suzuki introduced the RG500 which Sheene rode to a second, third and a fourth scoring 30 points and finishing sixth in the World Championship.

A spectacular crash at the Daytona 200 in the 1975 season threatened to end his career, breaking his left thigh, right arm, collarbone and two ribs, yet he recovered and was racing again seven weeks afterwards. Again riding the RG500 he scored a memorable first 500 cc win at the Dutch TT.[8][18] 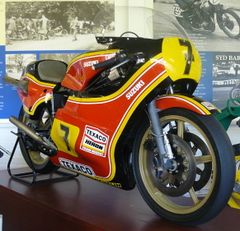 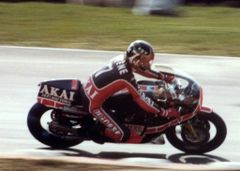 Sheene on the 1980 Akai Yamaha

Sheene's battle with Kenny Roberts at the 1979 British Grand Prix at Silverstone has been cited as one of the greatest motorcycle Grand Prix races of the 1970s.[20][21] After the 1979 season, he left the Heron-Suzuki factory team, believing that he was receiving inferior equipment to his team-mates. He switched to a privateer on a Yamaha machine, but soon started receiving works equipment. In 1981, Roberts the reigning World 500cc Champion for the third time in succession. Sheene,by now on a competitive Yamaha, was determined to take the championship from him. Ironically, Sheene and Roberts battled all season and let Suzuki riders Marco Lucchinelli of Italy and American Randy Mamola beat them for the top two spots. Roberts finished third and Sheene fourth in the final World Championship standings.

A crash at Silverstone where Sheene, riding his Yamaha, hit the obscured fallen machine of Frenchman Patrick Igoa[5] during practice for the 1982 British Grand Prix[22] largely ended his potential as a title threat, and he retired in 1984. He remains the only rider to win Grand Prix races in the 50cc and 500cc categories.[23]

Sheene was known for being outspoken in his criticism for what he considered to be dangerous race tracks, most notably, the Isle of Man TT course, which he considered too dangerous for world championship competition.[1][24] He was a colourful, exuberant character who used his good looks, grin and London accent to good effect in self-promotion, and combined with an interest in business was one of the first riders to make a lot of money from endorsements.[8] He is credited with boosting the appeal of motorcycle racing into the realm of the mass marketing media.[25] He also tried his hand as a TV show host, including the ITV series Just Amazing!, where he interviewed people who had, through accident or design, achieved feats of daring and survival (including the former RAF air gunner, Nicholas Alkemade, who survived a fall of 18,000 feet without a parachute from a blazing Avro Lancaster bomber over Germany in March 1944). Sheene and his wife Stephanie also starred in the low-budget film Space Riders.[8]

Finding fame and wealth through racing, Sheene had houses in Putney, south-west London, Norfolk and in 1977 he purchased a 700-year-old manor house in Charlwood, Surrey once owned by the actress Gladys Cooper.[4] He was contracted by Faberge to promote their Brut aftershave lotion.[1]

In 1975 while on crutches, Sheene met fashion model turned glamour model Stephanie McLean, who was Penthouse Pet of the Month for April 1970 and Pet of the Year in 1971, while they were working together on a photoshoot for Chrysler. She left her first husband for Sheene[1] and after she had divorced, the couple married in 1984, having a son and a daughter.[8]

Sheene enjoyed his lifestyle, socialising with friends such as James Hunt, Ringo Starr and George Harrison,[22] drinking and smoking heavily[26] even having a hole drilled through the chin-bar on his full-face helmet allowing him to smoke right up to the start of a race.[1]

The Sheene family moved to Australia in the late 1980s, in the hope that the warmer climate would help relieve some of the pain of Sheene's injury-induced arthritis, settling in a property near the Gold Coast.[8] He combined a property development business with a role as a commentator on motor sport. He began on SBS TV then moved to the Nine Network with Darrell Eastlake, and finally followed the TV broadcast rights of the Grand Prix motorcycle series to Network Ten.[3][8] Further to this, on Network Ten Sheene co-hosted the weekly motor sport television show RPM from 1997 to 2002 with journalist Bill Woods, and was involved in Ten's coverage of other motor sport including V8 Supercars for several years.

In the 1990s, Sheene appeared in a series of well known and popular television advertisements for Shell, with Australian motor sport icon Dick Johnson.

In later years, Sheene became involved in historic motorcycle racing,[1] often returning to England to race at Donington Park. He was also chosen to run with the Queen's Baton in the run-up to the 2002 Commonwealth Games held in Manchester, England.

In July 2002, at the age of 51, Sheene was diagnosed with cancer of the oesophagus and stomach.[22] Refusing conventional treatments involving chemotherapy, Sheene instead opted for a holistic approach involving a strict diet devised by Austrian healer Rudolf Breuss, intended to starve the cancer of nourishment.[1][22][26]

He died peacefully surrounded by his family at a hospital on Queensland's Gold Coast in 2003, aged 52, having suffered from the condition for eight months.[22]

Sheene is survived by his wife Stephanie and two children, Sidonie and Freddie.[8][22][27]

Following reconstruction of the Brands Hatch Circuit in England for safety concerns after requests by the F.I.M., the Dingle Dell section was changed for safety, and shortly after Sheene's death the new section was renamed Sheene's Corner in his honour. The FIM named him a Grand Prix "Legend" in 2001.[28] For the 2003 season, V8 Supercars introduced a medal in honour of Sheene, the Barry Sheene Medal, for the 'best and fairest' driver of the season. A memorial ride from Bairnsdale, Victoria to Phillip Island is held by Australian motorcyclists annually, before the MotoGP held at the island.[29]

On a side note, the obscure Eric Idle song "Mr. Sheene" which describes "Mr. Sheene's riding machine" appears to be about Barry Sheene.[7] It was released as a B-side of the 1978 single "Ging Gang Goolie" and is credited as released by Rutles-offshoot duo "Dirk and Stig." He is also featured on one of Artist Grayson Perry's Vases My Heroes (1994).

The following is a list of results achieved by Sheene.[2][30]