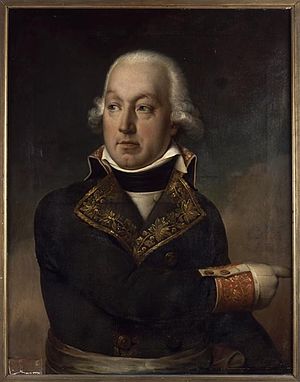 Schérer served in the Austrian army long before the Revolution, but defected to France in 1775. In 1780 Schérer became a major in an artillery regiment stationed in Strasbourg. He entered Dutch service in 1785 as a major in the Légion de Maillebois. In 1790 he was released from Dutch service with the rank of lieutenant colonel.

He returned to France in 1791 and in 1792 was made a captain in the 82nd Infantry Regiment, serving as aide-de-camp to General Jean de Prez de Crassier at the Battle of Valmy. In 1793 he served as a senior aide-de-camp to general Alexandre de Beauharnais on the Rhine. In 1794, Schérer was promoted to the rank of général de division and commanded a division in the Army of the Sambre and Meuse, serving with distinction at the Battle of Aldenhoven. On May 3, he married Marie Françoise Henriette Caroline Müller in a civil ceremony at Delle in the Franche-Comté. On November 3, 1794, he was named commander of the Army of Italy before his transfer to command the Army of the Eastern Pyrenees on March 3, 1795. On June 14, a 35,000-strong Spanish army defeated Schérer's 25,000 men in battle at Bàscara in Catalonia province in Spain.[1]

On August 31, 1795 he was again sent to Italy to replace François Kellerman (the older) as commander-in-chief of the Army of Italy. As commander of the Army of Italy, Schérer won the Battle of Loano (22–24 November 1795) against an Austrian army but failed to exploit his advantage due to his own caution and winter weather.[2] He was relieved of the command of this army on February 23, 1796 and replaced by Napoleon Bonaparte. Schérer was then unemployed for a number of months until being named Inspector-General of Cavalry, first of the Army of the Interior and then of the Army of the Rhine and the Moselle.

War of the Second Coalition

Schérer served as French Minister of War from July 22, 1797 to February 21, 1799. When the War of the Second Coalition broke out, Schérer was given command of the Army of Italy once again. He won an initial clash at Pastrengo on March 26. But he proved unable to stop the Russo-Austrian advance. He was defeated by Austrian General Pál Kray at the Battle of Magnano on April 5. "Schérer went into this battle without forming a reserve and was thus unable to react to crisis or opportunities effectively."[3] Forced to retire behind the river Mincio, he gave up command to Jean Moreau. Because of his loss of Italy he was forced to appear before a committee of inquiry. After securing an acquittal, he retired to private life on his estate at Chauny in Picardy, where he died in 1804.