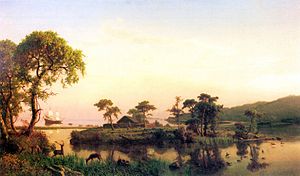 Bartholomew Gosnold (1571 – 22 August 1607) was an English lawyer, explorer, and privateer who was instrumental in founding the Virginia Company of London, and Jamestown in colonial America. He led the first recorded European expedition to Cape Cod. He is considered by Preservation Virginia (formerly known as the Association for the Preservation of Virginia Antiquities) to be the "prime mover of the colonization of Virginia".

Gosnold was born in Grundisburgh in Suffolk, England in 1571, and his family seat was at Otley, Suffolk. His parents were Anthony and Dorothy Bacon Gosnold. Henry Gosnold, the judge and friend of Francis Bacon, was his cousin. He graduated from the University of Cambridge and studied law at Middle Temple.[1] He was a friend of Richard Hakluyt and sailed with Walter Raleigh.

He obtained backing to attempt to found an English colony in the New World and in 1602 he sailed from Falmouth, England in a small Dartmouth bark, the Concord, with thirty-two on board. They intended to establish a colony in New England. Gosnold pioneered a direct sailing route due west from the Azores to what later became New England, arriving in May 1602 at Cape Elizabeth in Maine (Lat. 43 degrees).[2]

The next day, he sailed into Provincetown Harbor, where he is credited with naming Cape Cod.[3] Following the coastline for several days, he discovered Martha's Vineyard and named it after his deceased daughter, Martha, and the wild grapes that covered much of the land. Gosnold established a small post on Cuttyhunk Island, one of the Elizabeth Islands, near Gosnold, now in Massachusetts. The post was abandoned when settlers decided to return on the ship to England since they feared they had insufficient provisions to carry them through the winter.[2]

A notable account of the voyage, written by John Brereton, one of the gentlemen adventurers, was published in 1602, and this helped in popularising subsequent voyages of exploration and colonisation of the northeast seaboard of America.

Gosnold spent several years after his return to England promoting a more ambitious attempt; he obtained from King James I an exclusive charter for a Virginia Company to settle Virginia. To form the core of what would become the Virginia Colony at Jamestown, he recruited his brother Anthony, a cousin, his cousin-by-marriage Edward Maria Wingfield, as well as John Smith, in addition to members of his 1602 expedition. Gosnold himself served as vice-admiral of the expedition, and captain of the Godspeed (one of the three ships of the expedition; the other two being the Susan Constant, under Captain Christopher Newport, and the Discovery, under Captain John Ratcliffe).[4]

Gosnold also solicited the support of Matthew Scrivener, cousin of Edward Maria Wingfield. Scrivener became Acting Governor of the new Colony, but drowned in an accident in 1609 along with Anthony Gosnold, Bartholomew's brother, while trying to cross to Hog Island in a storm. (Scrivener's brother Nicholas had also drowned while a student at Eton).

File:PossibleGosnoldGravesite.jpg
Stone cross marking what is believed to be the gravesite of Bartholomew Gosnold

Gosnold was popular among the colonists and opposed the location of the colony at Jamestown Island due to what he perceived as its unhealthy location;[5] he also helped design the fort that held the initial colony. He died only four months after they landed, on 22 August 1607. George Percy's 'Discourse' that was printed in the fourth volume of Purchas His Pilgrimes (1625) records Gosnold's death "...Captain Bartholomew Gosnold one of Councile, he was buryed thereupon having all the ordinance in the Fourt shote offwith manye vollyes of small shot..."[2]

In 2003 Preservation Virginia announced that its archaeological dig at Jamestown had discovered the likely location of Gosnold's grave. It was also believed that he was buried outside the James day fort. The skeleton is currently on display at the Voorhees Archaearium at Historic Jamestowne.

Preservation Virginia began genetic fingerprinting, hoping to verify Gosnold's identity in time for the Jamestown quadricentennial. By June 2005 researchers and The Discovery Channel sought permission to take DNA samples from the remains of his sister, Elizabeth Tilney, located in the Church of All Saints, Shelley, near Hadleigh, and they were granted the first faculty for such purposes from the English diocese of St Edmundsbury and Ipswich.[7] Although they removed bone fragments from the church, they had difficulty in identifying the correct remains, and they were not able to conclude anything from their analysis. In November 2005 Preservation Virginia announced that, while they remained confident Tilney's remains were somewhere beneath the church floor, the tests they performed had not confirmed the link.