Bartlett is a city in Shelby County, Tennessee, United States, located northeast of Memphis, and is part of the Memphis metropolitan area. The population was 54,613 at the 2010 U.S. Census.[3]

The community from which the city of Bartlett grew was first called Union Depot and Green Bottom. It was the last major way station in Tennessee along the stagecoach route from Nashville westward and came into being about 1830. When the Memphis & Ohio Railroad took the place of the stages, Bartlett continued as a depot. This was a farming community, with major plantations along Stage Road.

On November 1, 1866,[4] with a population of less than 100, the city was officially incorporated and the name changed to Bartlett. Upon incorporation, Bryan Wither was named the city's inaugural mayor. It was named for Major Gabriel M. Bartlett, a planter, whose homeplace was located on the old Raleigh-Somerville Road (Stage Road) at the present location of Bartlett Station Plaza.

Bartlett's public school system was part of the Shelby County Schools[6] Until the end of the 2013-2014 school year. On July 16, 2013, the residents of Bartlett approved a referendum to form a Bartlett City School District.[7] This district launched in fall 2014 and includes the 11 school buildings within Bartlett city limits, according to an agreement reached between parties to a federal lawsuit.[8] The district's superintendent is David Stephens, former deputy superintendent of Shelby County Schools.[9]

Residents are in the Bartlett City Schools.

There were 13,773 households out of which 44.0% had children under the age of 18 living with them, 74.6% were married couples living together, 8.7% had a female householder with no husband present, and 14.2% were non-families. 12.1% of all households were made up of individuals and 4.3% had someone living alone who was 65 years of age or older. The average household size was 2.92 and the average family size was 3.18.

In existence since about 1829, Bartlett was incorporated in 1866 and remained a small town for another 100 years. From the "old" town of only 508 people at Stage Road and the railroad in 1960, Bartlett grew rapidly in the 1970s and 1980s both through new residents, largely due to "white flights" from Memphis, and through annexation, primarily to the east and north, to over 54,000 people today. In 2007, it was the ninth largest city in Tennessee.

Davies Manor Plantation is a historic property that includes the oldest log home in Shelby County open to the public, thirty-two acres of plantation land, and numerous outbuildings. These outbuildings range from a tenant cabin to a commissary, a gristmill to an outhouse. Additionally, the property contains several gardens, including a kitchen garden and a medicinal herb garden. There are even a walking tour and nature trails available for visitors who love the outdoors. The website is www.daviesmanorplantation.org 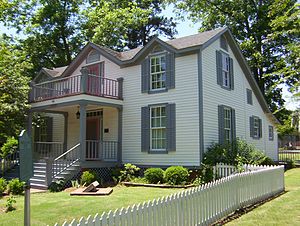 The Nicholas Gotten House is located at 2969 Court Street. It houses the Bartlett Museum, a local history museum operated by the Bartlett Historical Society.[14] The white frame structure was built by Nicholas Gotten in 1871 in the New England saltbox style.[15] A saltbox is a wooden frame house with a long, pitched roof that slopes down to the back.

The Bartlett Performing Arts & Conference Center, also known as BPACC, was finished in 1999 where it held its first show by Art Garfunkel.[17] BPACC is located at 3663 Appling Road, directly across the street from the Bartlett Police Station and Appling Middle School. The facility is not limited to performances but can be rented out for other events such as seminars or business meetings.[18]