Bas-Rhin (French pronunciation: ​[bɑ.ʁɛ̃]; Alsatian: Unterelsàss) is a department in the Alsace-Champagne-Ardenne-Lorraine region of France. The name means "Lower Rhine". It is the more populous and densely populated of the two departments of the traditional Alsace region, with 1,109,460 inhabitants in 2013. The prefecture and the General Council are based in Strasbourg. The INSEE and Post Code is 67.

The Rhine has always been of great historical and economic importance to the area, and it forms the eastern border of Bas-Rhin. The area is also home to some of the foothills of the Vosges Mountains.

The Bas-Rhin has a continental-type climate, characterised by cold, dry winters and hot, stormy summers, due to the western protection provided by the Vosges. However, the Alsatian climate is less continental than that of Burgundy. The average annual temperature is 10.4 °C (51 °F) in the lowlands (Entzheim) and 7 °C (45 °F) on high ground. The annual maximum temperature is high (30 °C (86 °F)). The average rainfall is 700 mm (27.56 in) per year.

Established according to data from the Infoclimat station at Strasbourg-Entzheim (the airport), over the period from 1961 to 1990.

This is the last French department to have kept the term Bas meaning "Lower" in its name. Other departments using this prefix preferred to change their names - e.g.: Basses-Pyrenees in 1969 became Pyrénées-Atlantiques and Basses-Alpes in 1970 became the department of Alpes-de-Haute-Provence. The same phenomenon was observed for the inférieur (also meaning "lower") departments such as Charente-Inférieure, Seine-Inférieure, and Loire-Inférieure.

Bas-Rhin is one of the original 83 departments created on 4 March 1790, during the French Revolution.

The borders of Bas-Rhin have changed many times:

Strasbourg, the chef lieu (principal city) of Bas-Rhin is one of two seats of the European Parliament, the other being in Brussels.

The demography of Bas-Rhin is characterized by high density and high population growth since the 1950s.

The population density of Bas-Rhin is 230.1 inhabitants per square kilometre in 2009 which is more than twice the average in France, which is 112 for the same year.

The first census was be conducted in 1801 and this count, renewed every five years from 1821, provides precise information on the evolution of population in the department.

Like other French departments, Bas-Rhin experienced a population boom after the Second World War, higher than the national level. The rate of population growth between 1946 and 2007 was 83.83%, compared to 57% nationally.

Sources : SPLAF Ldh/EHESS/Cassini until 1962, INSEE database from 1968 (population without double counting and municipal population from 2006)

According to the general census of the population of 1 January 2008, 2.3% of available housing in the department were second homes.

This table shows the main towns of the Bas-Rhin where second homes exceed 10% of total housing.

Communes with more than 10% Secondary Lodgings

The Bas-Rhin department has a high density of SMEs and SMIs and a higher proportion of workers in industry than the national average. Tourism activity is intense and creates many indirect jobs. The rate of unemployment is among the lowest in France: 6.5%. The average GDP per capita is €18,795 which places the region as the second largest in France with 2.9% of national GDP. Employment is distributed in the following way, as a percentage of the labor force: Agriculture: 8,411 or 2% Crafts and industry: 97,349 or 24.2% Building and Public Works: 23,928 or 6.0% Tertiary Sector: 271,984 or 67.8% Frontaliers:[9] 28,186

Weighting of the major economic sectors

Alsace and the adjacent Moselle department have a legal system slightly different from the rest of France. The statutes in question date from the period 1871 - 1919 when the area was part of the German Empire. With the return of Alsace-Lorraine to France in 1919, Paris accepted that Alsace and Moselle should retain some local laws in respect of certain matters, especially with regard to hunting, economic life, local government relationships, health insurance and social rights. It includes notably the absence of any formal separation between church and state: several mainstream denominations of the Christian church benefit from state funding, in contrast to principles applied in the rest of France.

The seat of the General Council is located in Strasbourg, in a building designed by the architect Claude Vasconi. The current prefect of the Bas-Rhin is Stéphane Fratacci. The representative of the Lower Rhine for the National Youth Council is Mr. Gautier Lutz.

Through its secondary and higher education institutions, Alsace is a very important region for students and is very internationally oriented. Strasbourg alone welcomes 75% of students in its university. Since the merger of three faculties and the IUT of Illkirch and of Schiltigheim it has become one of the largest universities in France. There are also renowned institutions such as the National School of Administration (ENA), the National Institute of Territorial Studies (INET), the Higher European Institute of Management, and the National School of Physics of Strasbourg.

The Château du Haut-Kœnigsbourg: built in the 12th century, the castle of Haut-Koenigsbourg dominates the plain of Alsace more than 700 metres (2,297 feet) above sea level. Destroyed during the Thirty Years War, it was restored from 1900 to 1908 by the German Emperor Wilhelm II. It houses a large collection of weapons and period furniture.

The Château du Fleckenstein: early 12th century, built by the imperial family of Hohenstaufen, the castle was occupied and turned into an impregnable fortress by the Fleckenstein family. Many activities are offered such as the "Castle of challenges". There is a large selection of 20 games crossing the forest and in the secret rooms of the castle to discover life in the Middle Ages.

The Château de Lichtenberg: built in the early 13th century on a hill overlooking the village, the site includes contemporary space-related cultural activities.

With more than 27 million tourists per year, Bas-Rhin is the 5th largest French department for the number of room-nights for visitors per year.

Other sites of interest are: 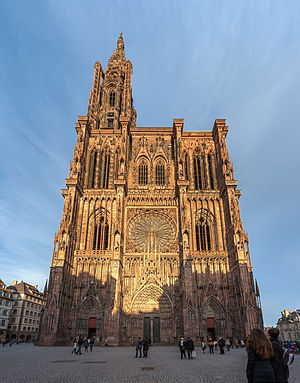 The Mont Sainte-Odile: a living spiritual place. Rising to 764 metres, this mountain in Vosges is topped by a monastery founded by Saint-Odile, the patron saint of Alsace. It is a tourist attraction and also a place of pilgrimage.

The Alsatian Museum: A museum of Art and Popular Traditions. There is a large collection of utilitarian objects, decorative objects, as well as costumes that depict everyday life in Alsace in the 18th and 19th centuries.

The Tomi Ungerer Museum: there is a large collection of drawings, archives, magazines, and toys donated to his hometown by the French illustrator Tomi Ungerer. It also hosts temporary exhibitions.

The Palais Rohan: The Rohan Palace was built between 1731 and 1742 at the request of Armand de Rohan-Soubise, Cardinal and Bishop of Strasbourg, who made his residence in the historic heart of the city. It also hosts the Arts and Crafts Museum, Archaeological Museum, and the Museum of Fine Arts.

The stork is the emblematic bird of Alsace. According to legend, it brings newborn babies wrapped in a cloth tightly in its beak. Once disppeared, it has now protected and become an integral part of the landscape. They can be seen mostly on the roofs of public buildings and more on houses.[12]

The traditional Alsatian costume is a symbol of the region. Although it is usually composed of a black hat and a red skirt, the symbol of Alsace, there are many other outfits that vary between villages but also according to the social status of the person. Today virtually disappeared, they can still be seen in some villages at various events and through folk groups.

Many traditions[13] have their origins in a quest for the meaning of life or in the rites of protection e.g. Christian festivals, even today create the rhythm of life in the villages of the region. The four seasons each have their share of celebrations: crop harvest, grape harvest, employers' feast days, crafts, yard sales, local produce.