From Infogalactic: the planetary knowledge core
Jump to: navigation, search
For other uses, see Bashi-bazouk (disambiguation). 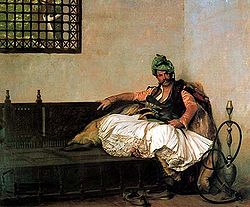 A bashi-bazouk or bashibazouk (Turkish başıbozuk, literally "damaged head", also named delibaş, literally "crazy head", both meaning "free headed", "leaderless", "disorderly") was an irregular soldier of the Ottoman army. A Bashi-Bazouk may be Turk but also Circassian, Kurd, Arab, Albanian.[1] They were particularly noted for their lack of discipline. 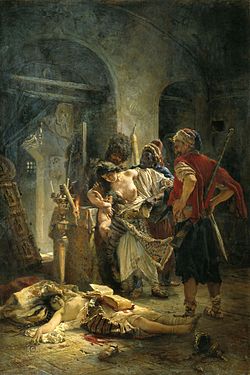 The Bulgarian martyresses by Konstantin Makovsky, a painting depicting the rape of Bulgarian women by the Bashi-bazouk during the April Uprising.[2][3] Unrestrained by the regulations that governed regular soldiers in the army, they became notorious for preying on civilians.[4]

Although Turkish armies always contained bashi-bazouk adventurers as well as regular soldiers, the strain on the Ottoman feudal system caused mainly by the Empire's wide expanse required heavier reliance on irregular soldiers. They were armed and maintained by the government, but did not receive pay and did not wear uniforms or distinctive badges. They were motivated to fight mostly by expectations of plunder.[5] Though the majority of troops fought on foot, some troops (called akinci) rode on horseback. Because of their lack of discipline, they were incapable of undertaking major military operations, but were useful for other tasks such as reconnaissance and outpost duty. However, their uncertain temper occasionally made it necessary for the Turkish regular troops to disarm them by force.[4]

The Ottoman army consisted of the following: 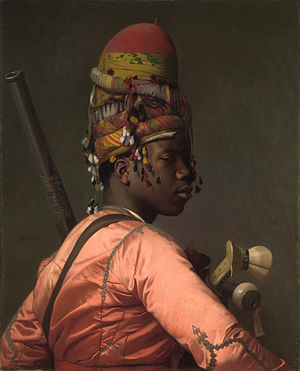 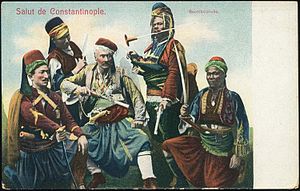 An attempt by Husrev Pasha to disband his Albanian bashi-bazouks in favor of his regular forces began the rioting which led to the establishment of Muhammad Ali's Khedivate of Egypt.[citation needed]

The bashi-bazouk were notorious for being brutal and undisciplined, thus giving the term its second, colloquial meaning of "undisciplined bandit" in many languages. A notable example of this use is in the comic series The Adventures of Tintin, where the word is often used as an expletive by Captain Haddock.[6][7]

Their use was abandoned by the end of the 19th century. However, self-organized bashi-bazouk troops still appeared later.

The term "bashibozouk" has also been used for a mounted force, existing in peacetime in various provinces of the Ottoman Empire, which performed the duties of gendarmerie.