From Infogalactic: the planetary knowledge core
Jump to: navigation, search
This article is about a federal subject of Russia. For the newspaper, see Bashkortostan (newspaper).

The Republic of Bashkortostan (Russian: Респу́блика Башкортоста́н, tr. Respublika Bashkortostan; IPA: [rʲɪsˈpublʲɪkə bəʂkərtɐˈstan]; Bashkir: Башҡортостан Республикаһы, Başqortostan Respublikahı), also known as Bashkiria (Russian: Башки́рия, tr. Bashkiriya; IPA: [bɐʂˈkʲirʲɪjə]) is a federal subject of Russia (a republic). It is located between the Volga River and the Ural Mountains. Its capital is the city of Ufa. With the population of 4,072,292 as of the 2010 Census, Bashkortostan is the most populous of the republics in Russia.[9]

The state has strong economic and cultural ties with its western neighbor the Republic of Tatarstan.[21][22][23]

The name "Bashkortostan" derives from the name of the Bashkir ethnic group, also known as Bashkorts.[citation needed] While the root of the name is Turkic (being a combination of 'baş', which in Turkish can mean head, chief, main, principal, and 'kurt' meaning wolf, one of the animals regarded as sacred to Turkic peoples);[citation needed] the suffix -stan is Persian, common to many Eurasian country-names. They speak the Bashkir language, which belongs to the Kypchak branch of the Turkic languages.[citation needed]

The first settlements in the territory of modern Bashkortostan date from the early Paleolithic period, but the Bronze Age spurred an upsurge in the population of this territory.[24] When people of the Abashevo culture started settling here they possessed high skills in manufacturing bronze tools, weapons, and decorations. They were the first to establish permanent settlements in the Southern Urals.

Bashkortostan takes its name from its native people — the Bashkirs. The Russian (Slavonic) name of the country — Bashkiriya — formed at the end of the 16th century. Originally it appeared in the forms Bashkir’, Bashkirda and Bashkir horde. The first written references to Bashkir tribes appear in compositions of Herodotus (5th century BCE). The ethnonym Bashkirs first became known in the 9th century. In the 10th century, Al-Balkhi wrote about Bashkirs as a people, divided into two groups, one of which inhabited the Southern Urals, while the other lived near the Danube river, close to the boundaries of Byzantium. His contemporary Ibn-Ruste described the Bashkirs as "an independent people, occupying territories on both sides of the Ural mountain ridge between Volga, Kama, Tobol and upstream of Yaik river".

After the early-feudal Mongolian state had broken down in the 14th century, the territory of modern Bashkortostan became divided between the Kazan and Siberia Khanates and the Nogai Horde. The tribes that lived there were headed by bi (tribal heads). After Kazan fell to Ivan the Terrible in 1554–1555, representatives of western and northwestern Bashkir tribes approached the Tsar with a request to voluntarily join Muscovy.[citation needed]

Starting from the second half of the 16th century, Bashkiria's territory began taking shape as a part of the Russian state. In 1798 the Spiritual Assembly of Russian Muslims was established[by whom?]— an indication that the tsarist Government recognized the rights of Bashkirs, Tatars, and other Muslim nations to profess Islam and perform religious rituals. Ufa Governorate (guberniya), with a center in Ufa, was formed in 1865— another step towards territorial identification.

After the Russian Revolution of 1917, the Bashkir Autonomous Soviet Socialist Republic (ASSR) was established on March 23, 1919;[4] first as Little Bashkortostan; eventually all of Ufa Governorate became incorporated into the newly established republic. During the Soviet period, Bashkiria was granted broad autonomous rights— the first among other Russian regions. The administrative structure of the Bashkir ASSR was based on principles similar to those of other autonomous republics of Russia.

The extraction of crude oil in Bashkiria began in 1932. At the end of 1943 large crude oil deposits were discovered.[by whom?] During the Great Patriotic War of 1941 to 1945, Bashkiria became one of the major regions of the Soviet Union to accommodate plants and factories evacuated from Western Russia, as well as great masses of people, while also providing the country with weaponry, fuel, and foodstuffs. After the war, a number of industries developed further in Bashkiria, such as mining, machine-building and (especially) oil-refining. Bashkiria's industry became a solid base for the further economic growth of all European outlying territories of Russia.

Bashkortostan contains part of the southern Urals and the adjacent plains. 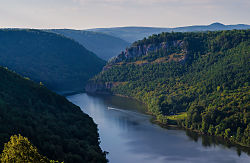 There are over 13,000 rivers in the republic. Many rivers are part of the deepwater transportation system of European Russia; they provide access to ports of the Baltic and Black seas. 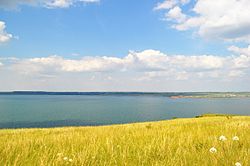 The republic contains part of the southern Urals, which stretch from the northern to the southern border. The highest mountains include: 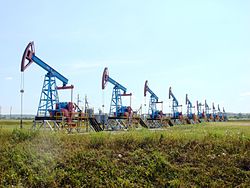 The republic has enough mineral resources to provide its power and fuel complex as well as petro-chemical, chemical, agro-industrial complex, ferrous and non-ferrous metallurgy, glass-making and ceramic branches with raw materials.

Bashkortostan is one of the major raw materials bases for Russia non-ferrous metallurgy. The republic has good deposits of lignite with a high degree of bitumenosity. This lignite can be used for obtaining a variety of different chemical products like resins, surface-active substances, gummy fertilizers, and other stimulants for plants growth. Mining-chemical raw materials (rock salt, lime, phosphorites, barytes, etc.) are quite substantial, and are utilized in the republic economy.

Bashkortostan is also rich in woods. The total territory covered with forests is about 62,000 square kilometers (24,000 sq mi). More than one third of the republic territory is covered with woods. The following types of trees dominate: birch tree, conifers, lime, oak, and maple. The general stock of timber according to some evaluation is 717.9 million m³. Bashkortostan forests have special sanctuaries and national parks. They cover more than 10,000 square kilometers (3,900 sq mi).

Bashkortostan is also rich in springs and sources of mineral, medicinal, and drinking water.

Main article: Administrative divisions of the Republic of Bashkortostan 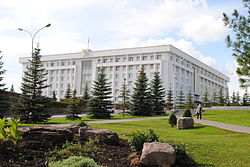 Rustem Khamitov assumed office on July 19, 2010. His predecessor was Murtaza Rakhimov, elected on December 17, 1993. Before the elections, Rakhimov was the Chairman of the Supreme Soviet of the Republic— the highest post at that time. Rakhimov was re-elected in December 2003 in a poll condemned by the OSCE for exhibiting "elements of basic fraud."

The Republic's parliament is the State Assembly—Kurultai, popularly elected every five years. The one-chamber State Assembly has 120 deputies.

The judicial power of the republic is in the hands of the Constitutional Court, the Supreme Court, the Court of Appeals, district Courts, and justices of the peace.

In full accord with universally recognized principles of international law, articles of the European Charter of Local Self-Government and the Constitution of the Russian Federation, the Republic of Bashkortostan ensures in its Constitution that local self-government is recognized and guaranteed within the republic's territory.

The state has strong ties with its neighbor Tatarstan.[26][27] 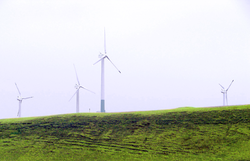 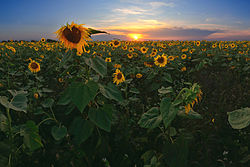 Sunflower field in Ishimbaysky District. Bashkortostan has a developed agriculture

Bashkortostan is one of the most developed regions of the Russian Federation in terms of its gross regional output, volume of industrial production, agricultural production, and investment in fixed assets.

The economy of Bashkortostan, being one of the largest industrial centers of Russia, is very diverse. Bashkortostan has a large agricultural sector. But the republic's most important industry is chemical processing; Bashkortostan produces more oil than any other region of Russia, about 26 million tons annually, and provides 17% of the country's gasoline and 15% of its diesel fuel. Other important products manufactured in Bashkortostan include alcohols, pesticides and plastics.

Bashkortostan is among the leaders in real estate development,[33] has a developed electric power industry[34] and tourism.[35]

According to Forbes the capital of republic, Ufa is the best city in Russia for business among cities with population over one million (2013).[36] 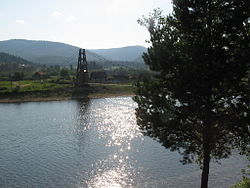 Bashkir village on the Inzer river 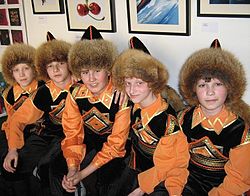 According to the 2010 Census, the ethnic composition was:[9] 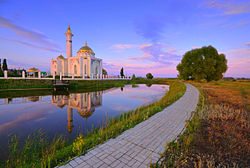 Islam is adhered to by a plurality of the nation's population[44] of Bashkir and Tatar descent. The Muslims of Bashkortostan follow Sunni Hanafi school of Islamic law.

Most ethnic Russians, Chuvash and Ukrainians are Orthodox Christians. Most Mari are Pagan. Non-religious people form a substantial part of any ethnic group in Bashkortostan. There are 13,000 Jews in the republic, with a historic synagogue in Ufa, and a new Jewish Community Center built in 2008.[45]

According to a 2012 official survey[42] 38% of the population of Bashkortostan is Muslim, 25.2% adheres to the Russian Orthodox Church, 3% are unaffiliated generic Christians, 1% are Orthodox Christian believers without belonging to any church or members of other Orthodox churches, and 2% are adherents of the Slavic native faith (Rodnovery), the Mari native religion, or Tengrism. In addition, 15% of the population declares to be "spiritual but not religious", 8% is atheist, and 7.8% follows other religions or did not give an answer to the question.[42]

About sixty scientific organizations are active in the republic. Fundamental and applied scientific research is under way at twelve institutes of the Russian Academy of Sciences, twenty-nine institutes of different branches of industry, as well as numerous design bureaus and organizations, universities, and colleges.

The country's system of popular education took shape over many centuries and reflects the Bashkir people's folklore, national customs, and traditions. When Islam spread in Bashkiria in the 10th century, an educational system began to emerge gradually— primarily religious schools operated under the supervision of mosques (maktabeh and madrasah).

In addition, many institutions of higher education operate in the republic, including branches of 16 leading Russian universities and colleges. Specialists graduate with degrees in about 200 trades and professions.

Education is primarily in Russian and Bashkir. 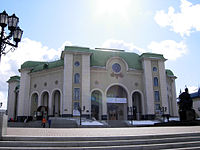 Bashkortostan is one of the largest cultural centers of Russia[citation needed].

The Bashkir School of Dance is well respected[citation needed], with many students receiving international awards at competitions in Russia and other countries. World-renowned ballet dancer Rudolf Nureyev, as a child, was encouraged to dance in Bashkir folk performances, and began his dancing career in Ufa.