The Basilica della Santa Casa (English: Basilica of the Holy House) is a Catholic place of pilgrimage in Loreto, Italy, containing the house in which the Virgin Mary lived.[1][2]

The basilica is a Late Gothic structure continued by Giuliano da Maiano, Giuliano da Sangallo and Donato Bramante.[3] It is 93 meters long, 60 meters wide, and its campanile is 75.6 meters high.

The façade of the church was erected under Sixtus V, who fortified Loreto and gave it the privileges of a town (1586); his colossal statue stands in the middle of front steps. Over the principal doorway is a life-size bronze statue of the Virgin and Child by Girolamo Lombardo; the three superb bronze doors executed at the latter end of the 16th century and under Paul V (1605–1621) are also by Lombardo, his sons and his pupils, among them Tiburzio Vergelli, who also made the fine bronze font in the interior. The doors and hanging lamps of the Santa Casa are by the same artists.

The richly decorated campanile (1750 to 1754), by Vanvitelli,[3] is of great height; the principal bell, presented by Leo X in 1516, weighs 11 tons. The interior of the church has mosaics by Domenichino and Guido Reni and other works of art, including statues by Raffaello da Montelupo. In the sacristies on each side of the right transept are frescoes, on the right by Melozzo da Forlì, on the left by Luca Signorelli. In both are fine intarsias. The basilica as a whole is thus a collaborative work by generations of architects and artists. 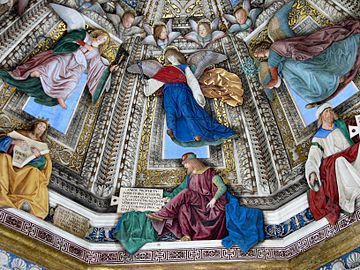 Fresco by Melozzo da Forlì in the sacristy of St Marc

The main attraction of Loreto is the Holy House itself (in Italian, the Santa Casa di Loreto). It has been a Catholic pilgrimage destination since at least the 14th century and a popular tourist destination for non-Catholics as well.

It is a plain stone building, 8.5 m by 3.8 m and 4.1 m high; it has a door on the north side and a window on the west; and a niche contains a small black image of the Virgin and Child, in Lebanon cedar, and richly adorned with jewels. In 1920 the Madonna of Loreto was declared to be the patron saint of air travellers and pilots by Pope Benedict XV.[4] The statue was commissioned after a fire in the Santa Casa in 1921 destroyed the original madonna, and it was granted a Canonical Coronation in 1922 by Pope Pius XI. Around the house is a tall marble screen designed by Bramante and executed under Popes Leo X, Clement VII and Paul III, by Andrea Sansovino, Girolamo Lombardo, Bandinelli, Guglielmo della Porta and others. The four sides represent the Annunciation, the Nativity, the Arrival of the Santa Casa at Loreto and the Nativity of the Virgin, respectively. The treasury contains a large variety of rich and curious votive offerings. The architectural design is finer than the details of the sculpture. The apse is decorated with 19th-century German frescoes.

The history of the house dates from at least the close of the Crusades. It is briefly referred to in the Italia Illustrata of Flavius Blondus, secretary to Popes Eugene IV, Nicholas V, Calixtus III and Pius II; it is to be read in all its fullness in the Redemptoris mundi Matris Ecclesiæ Lauretana historia, by a certain Teremannus, contained in the Opera Omnia (1576) of Baptista Mantuanus.

The town has been a popular pilgrimage site since the 13th century. Local lore recounts that the house in which the Holy Family lived was miraculously flown from Palestine to Loreto by four angels just before the final expulsion of the Crusaders from the Holy Land. In more recent times, the Church traced the linguistic origins of the story to a local aristocratic family called "Angelos", which were responsible for the transfer.[5]

According to this narrative, the house at Nazareth in which Mary had been born and brought up, received the Annunciation, and had lived during the Childhood of Christ and after his Ascension, was converted into a church by the Twelve Apostles. In 336, Empress Helena made a pilgrimage to Nazareth and directed that a basilica be erected over it, in which worship continued until the fall of the Kingdom of Jerusalem.

The tale further states that, threatened with destruction by the Turks, the house was carried by angels through the air and initially deposited in 1291 on a hill at Tersatto (now Trsat, a suburb of Rijeka / Fiume, Croatia), where an appearance of the Virgin and numerous miraculous cures attested its sanctity. These miracles were confirmed by investigations made at Nazareth by messengers from the governor of Dalmatia. In 1294, angels carried it again across the Adriatic Sea to the woods near Recanati; from these woods (Latin lauretum, Italian Colli del Lauri), or from the name of its proprietress (Laureta), the chapel derived the name which it still retains (sacellum gloriosæ Virginis in Laureto). From this spot it was afterwards removed to the present hill in 1295, with a slight adjustment being required to fix it in its current site. It is this house that gave the title Our Lady of Loreto sometimes applied to the Virgin; the miracle is occasionally represented in religious art wherein the house is borne by an angelic host.

Bulls in favour of the Shrine at Loreto were issued by Pope Sixtus IV in 1491, and by Julius II in 1507, the last alluding to the translation of the house with some caution (ut pie creditur et fama est). While, like most miracles, the translation of the house is not a matter of faith for Catholics, nonetheless, in the late 17th century, Innocent XII appointed a missa cum officio proprio (a special mass) for the Feast of the Translation of the Holy House, which as late as the 20th century was enjoined in the Spanish Breviary as a greater double on 10 December 10.

On 4 October 2012, Benedict XVI visited the Shrine to mark the 50th anniversary of John XXIII's visit. In his visit, Benedict formally entrusted the World Synod of Bishops and the Year of Faith to the Virgin of Loreto. [6][7][8]