Plan of the church

Mithraeum in the basement, 2nd century

The Basilica of Saint Clement (Italian: Basilica di San Clemente al Laterano) is a Roman Catholic minor basilica dedicated to Pope Clement I located in Rome, Italy. Archaeologically speaking, the structure is a three-tiered complex of buildings: (1) the present basilica built just before the year 1100 during the height of the Middle Ages; (2) beneath the present basilica is a 4th-century basilica that had been converted out of the home of a Roman nobleman, part of which had in the 1st century briefly served as an early church, and the basement of which had in the 2nd century briefly served as a mithraeum; (3) the home of the Roman nobleman had been built on the foundations of a republican era building that had been destroyed in the Great Fire of 64 AD.

This ancient church was transformed over the centuries from a private home that was the site of clandestine Christian worship in the 1st century to a grand public basilica by the 6th century, reflecting the emerging Catholic Church's growing legitimacy and power. The archaeological traces of the basilica's history were discovered in the 1860s by Joseph Mullooly,[1] lector in Sacred Theology beginning in 1849 at the College of Saint Thomas in Rome, the future Pontifical University of Saint Thomas Aquinas, Angelicum.[2]

Before the 4th century

The lowest levels of the present basilica contain remnants of the foundation of a possibly republican era building that might have been destroyed in the Great Fire of 64. An industrial building, perhaps the imperial mint of Rome (because a similar building is represented on a 16th-century drawing of a fragment of the Severan marble plan of the city with the legend MON..., although this identification has been challenged), was built or remodelled on the same site during the Flavian period and shortly thereafter an insula, or multi-level house alongside it was also built, separated from the industrial building by a narrow alleyway. About a hundred years later (c. 200), the central room of the insula was remodelled for use as part of a mithraeum, that is, as part of a sanctuary of the cult of Mithras. The main cult room (the speleum, "cave"),[3] which is about 9.6m long and 6m wide, was discovered in 1867 but could not be investigated until 1914 due to lack of drainage.[4] The exedra, the shallow apse at the far end of the low vaulted space, was trimmed with pumice to render it more cave-like.

Central to the main room of the sanctuary was found an altar, in the shape of a sarcophagus, and with the main cult relief of the tauroctony, Mithras slaying a bull, on its front face.[5] The torchbearers Cautes and Cautopates appear on respectively the left and right faces of the same monument. A dedicatory inscription identifies the donor as one pater Cnaeus Arrius Claudianus, perhaps of the same clan as Titus Arrius Antoninus' mother. Other monuments discovered in the sanctuary include a bust of Sol[6] kept in the sanctuary in a niche near the entrance, and a figure of Mithras petra generix,[7] i.e. Mithras born of the rock. Fragments of statuary of the two torch bearers were also found .[8] One of the rooms adjoining the main chamber has two oblong brickwork enclosures,[9] one of which was used as a ritual refuse pit for remnants of the cult meal. All three monuments mentioned above are still on display in the mithraeum. A fourth monument, – a statue of St. Peter found in the speleum's vestibule and still on display there – is not of the mysteries.

At some time in the 4th century, the lower level of the industrial building was filled in with dirt and rubble and its second floor remodeled. An apse was built out over part of the domus, whose lowest floor, with the Mithraeum, was also filled in. This "first basilica" is known to have existed in 392, when St. Jerome wrote of the church dedicated to St. Clement, i.e. Pope Clement I, a 1st-century AD Christian convert and considered by patrologists and ecclesiastical historians to be identical with Titus Flavius Clemens. Restorations were undertaken in the 9th century and ca 1080-99.[10]

The early basilica was the site of councils presided over by Pope Zosimus (417) and Symmachus (499). The last major event that took place in the lower basilica was the election in 1099 of Cardinal Rainerius of St Clemente as Pope Paschal II. 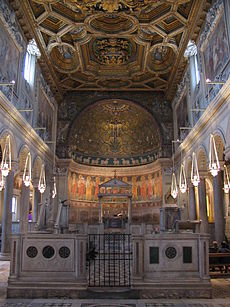 Interior of the second basilica

Apart from those in Santa Maria Antiqua, the largest collection of Early Medieval wall paintings in Rome is to be found in the lower basilica of San Clemente.[11]

Four of the largest frescoes in the basilica were sponsored by a lay couple, Beno de Rapiza and Maria Macellaria, at some time in the last third of the 11th century and focus on the life, miracles, and translation of St. Clement, and on the life of St. Alexius. Beno and Maria are shown in two of the compositions, once on the façade of the basilica together with their children, Altilia and Clemens ("puerulus Clemens," i.e. "little boy Clement"), offering gifts to St. Clement, and on a pillar on the left side of the nave, where they are portrayed on a small scale witnessing a miracle performed by St. Clement. Below this last scene is one of the earliest examples of the passage from Latin to vernacular Italian: a fresco of the pagan Sisinnius and his servants, who think they have captured St. Clement but are dragging a column instead. Sisinnius encourages the servants in Italian "Fili de le pute, traite! Gosmari, Albertel, traite! Falite dereto colo palo, Carvoncelle!",[12] which, translated into English means: "Come on, you sons of bitches, pull! Come on, Gosmari, Albertello, pull! Carvoncello, give it to him from the back with the pole!" The saint speaks in Latin, in a cross-shaped inscription: "Duritiam cordis vestris, saxa trahere meruistis", which means "You deserved to drag stones due to the hardness of your hearts."

Art historians have long regarded Beno de Rapiza and Maria Macellaria as partisans of the now-canonical 'reform' popes Gregory VII, Urban II, and Paschal II and the frescoes as reform-party propaganda. However, if the paintings date to the 1080s or 1090s, as many art historians believe, then Beno and Maria may instead have favoured the Antipope Clement III (Wibert of Ravenna), whom they sought to honour through paintings about the early Christian pope of the same name.[13] 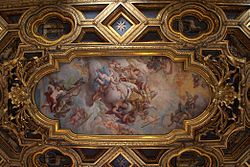 The current basilica was rebuilt in one campaign by Cardinal Anastasius, ca 1099-ca. 1120. An now outdated hypothesis held that the original church had burned out during the Norman sack of the city under Robert Guiscard in 1084, but no evidence of fire damage in the lower basilica has been found to date. One possible explanation is that the lower basilica was filled in and the new church built on top due to the close association of the lower structure with the imperial opposition pope ("antipope") Clement III / Wibert of Ravenna. [13] Today, it is one of the most richly adorned churches in Rome. The ceremonial entrance (a side entrance is ordinarily used today) is through an atrium (B on plan) surrounded by arcades, which now serves as a cloister, with conventual buildings surrounding it. Fronting the atrium is the chaste facade of Carlo Stefano Fontana (nephew of Carlo Fontana), supported on antique columns, and his little campanile (illustration). The basilica church behind it is in three naves divided by arcades on ancient marble or granite columns, with Cosmatesque inlaid paving. The 12th-century schola cantorum (E on plan) incorporates marble elements from the original basilica. Behind it, in the presbytery is a ciborium (H on plan) raised on four gray-violet columns over the shrine of Clement in the crypt below. The episcopal seat stands in the apse, which is covered with mosaics on the theme of the Triumph of the Cross that are a high point of Roman 12th century mosaics.

Irish Dominicans have been the caretakers of San Clemente since 1667, when England outlawed the Irish Catholic Church and expelled the entire clergy. Pope Urban VIII gave them refuge at San Clemente, where they have remained, running a residence for priests studying and teaching in Rome. The Dominicans themselves conducted the excavations in the 1950s in collaboration with Italian archaeology students.

On one wall in the atrium is a plaque affixed by Pope Clement XI praising St. Clement, "This ancient church has withstood the ravages of the centuries." Clement undertook restorations to the venerable structure, which he found dilapidated. He selected Carlo Stefano Fontana as architect, who erected a new facade, completed in 1719.[14] The carved and gilded coffered ceilings of nave and aisles, fitted with paintings, date from this time, as do the stucco decor, Ionic capitals and frescos.

In one lateral chapel, there is a shrine with the tomb of Saint Cyril of the Saints Cyril and Methodius who translated the Bible into Slavic language, created the Glagolitic alphabet and Christianized the Slavs. Pope John Paul II used to pray there sometimes for Poland and the Slavic countries.[15] The chapel also holds a Madonna by Giovanni Battista Salvi da Sassoferrato.

Current Cardinal Priest of the Titulus S. Clementi is Adrianus Johannes Simonis, archbishop emeritus of Utrecht in the Netherlands. Pope Paschal II (1076–1099) was one of the previous holders of the titulus.