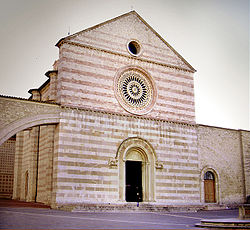 Construction of the church began under the direction of Filippo Campello, one of the foremost architects of the time. On 3 October 1260, Clare's remains were transferred from the chapel of San Giorgio to the Basilica of Saint Clare where they were buried in the earth under the high altar of the new church.

Having remained, like the body of St. Francis himself, hidden for six centuries, Clare's tomb was found in 1850 after a prolonged search. On 23 September that year, the coffin was unearthed and opened. The flesh and clothing of the saint had been reduced to dust, but the skeleton was perfectly preserved. Finally, on 29 September 1872, the saint's bones were transferred, with much pomp, by Archbishop Pecci (later Pope Leo XIII) to a shrine in the crypt of the Basilica of Saint Clare that had been erected to receive them. It is here that they may now be seen. The feast of St. Clare is celebrated throughout the Church on 11 August. The feast of her first translation is kept in the order on 3 October, and that of the finding of her body on 23 September.

File:GuardianLionAssisi.jpg
Statue of a Lion outside the Basilica in the square.