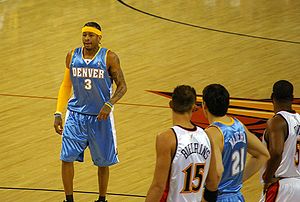 Allen Iverson (#3) wears a basketball sleeve on one arm.

A basketball sleeve, like the wristband, is an accessory that basketball players wear. Made out of nylon and spandex, it extends from the biceps to the wrist. It is sometimes called a shooter sleeve[1] or an arm sleeve.[2]

National Basketball Association player Allen Iverson began using a basketball sleeve during the 2000-01 season due to bursitis in his right elbow.[3] Afterward, fans wore the sleeve as a fashion statement,[4] and by 2008, the sleeves were the most popular non-apparel items sold by the league, according to an NBA Store spokesperson.[5] Other players, including Ray Allen, Vince Carter, Russell Westbrook, Carmelo Anthony, Dwight Howard, John Wall, Kyrie Irving, Dwyane Wade, Kobe Bryant,[6] and LeBron James[2] have worn the sleeves as well.

Iverson continued wearing his basketball sleeve long after his elbow had healed, which led Steven Kotler of Psychology Today to suggest that the sleeve may act as a placebo to prevent future injuries. [6] Basketball sleeves are also sometimes referred to as basketball shooting sleeves. Some players believe the mild compression they provide helps keep their shooting arm warm and improves circulation. Although some studies show improved circulation and reduced soreness, there has been no definitive study on the use of basketball sleeves.[7] 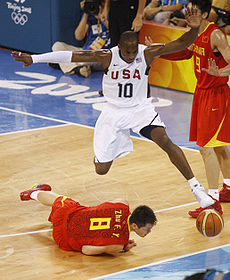